Of the Historical Critical Method and the Catholic Church (Pt. 2 of 2)

Today, I wanted to turn to perhaps the greatest Scripture Scholar to ever sit upon St. Peter's Throne to see why the historical-critical method can be used in such a way to destroy Faith rather than build it up. In the forward to the second volume of his masterful meditation on the words and actions of Jesus Christ, Pope Benedict XVI reflects the problem of historical-critical exegeses thus (emphasis added),


One thing is clear to me: in two hundred years of exegetical work, historical-critical exegesis has already yielded its essential fruit. If scholarly exegesis is not to exhaust itself in constantly new hypotheses... it must take a methodological step forward... It must learn that the positivistic hermeneutic on which it has been based does not constitute the only valid and definitevely evolved rational approach; rather, it constitutes a specific and historically conditioned form of rationality that is both open to correction and completion and in need of it. It must recognize that a properly developed faith-hermeneutic is appropriate to the text and can be combined with a historical hermeneutic... so as to form a methodological whole.1 The two questions are actually twin sides of the same coin. The "positivistic hermeneutic" is one which, a priori, discounts the miraculous. It, again from the outset, decides, as a matter of method, to regard all and any accounts of supernatural occurrences with suspicion, no better still, it decides all such account must be rejected as unhistorical accretions. That this is a methodological decision assumed at the start, before investigation, rather than a conclusion reached through study of the texts (or the historical context surrounding the texts) is important to note.

An example might clarify. When liberal Biblical exegetes declare that the "real miracle" in Matthew 14:13-212 is how Jesus got everyone to "share" this isn't something the exegete has uncovered in text nor is it something historical scholarship has revealed. No early manuscript has been found that contains the same story but with the people sharing food rather than Jesus multiplying loaves and fishes. Rather, an a priori philosophical position has been staked out by the liberal exegete, one that says that miracles are impossible and therefore must be later additions to the original event which is reconstructed to fit the philosophical position. This is clearly "junk science," a case of forging the data to fit the desired conclusion rather than taking a hypothesis and allowing it to be tested, and possibly falsified, by the data.

It is this "junk science" approach to Biblical exegesis (better eisegesis3) that leads to the false "positivistic hermeneutic" that is prevalent with, but not necessarily apart of, historical critical scholarship. This assumption, this starting point, is what must be challenged (and indeed is challenged by a book like Benedict's Jesus of Nazareth. Following the Holy Father's lead, Catholic scholars are called to take up a "faith-hermeneutic," that is they are to read and interpret the Biblical texts in the same spirit and with the same worldview with which it was written rather than the "alien" hermeneutic that adopts the positivist stance.

We might ask whether this view is "rational." C.S. Lewis, who must have known a few of these exegetes, rebates the idea the miracles are necessarily to be rejected masterfully in his book Miracles

(if you haven't already, buy it - through our link, of course - and start reading it today). A great summary of the argument comes at the end of the eleventh chapter (this, in fact, is one of my favorite passages in Lewis), 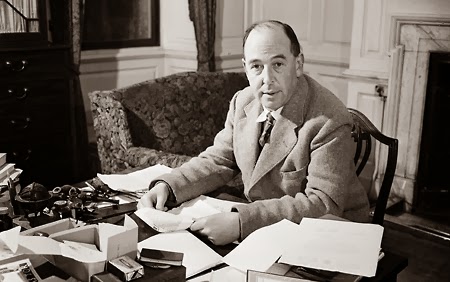 "Men are reluctant to pass over from the notion of an abstract and negative deity to the living God. I do not wonder. Here lies the deepest taproot of Pantheism and of the objection to traditional imagery. It was hated not, at bottom, because it pictured Him as a man but because it pictured Him as a king, or even as a warrior. The Pantheist’s God does nothing, demands nothing. He is there if you wish for Him, like a book on a shelf. He will not pursue you. There is no danger that at anytime Heaven and Earth should flee away at His glance. If He were the truth, then we could really say that all the Christian images of kingship were a historical accident of which our religion ought to be purged. It is with a shock that we discover them to be indispensable. You have had a shock like that before, in connection with smaller matters – when the line pulls at your hand, when something breathes beside you in the darkness. So here; the shock comes at the precise moment when the thrill of life is communicated to us along the clue we have been following. It is always shocking to meet life where we thought we were alone. “Look out!” we cry, “it’s alive!” And therefore this is the very point at which so many draw back – I would have done so myself if I could – and proceed no further with Christianity. An “impersonal God” – well and good. A subjective God of beauty, truth and goodness, inside our own heads – better still. A formless life force surging through us, a vast power which we can tap – best of all. But God Himself, alive, pulling at the other end of the cord, perhaps approaching at an infinite speed, the hunter, king, husband – that is quite another matter. There comes a moment when the children who have been playing at burglars hush suddenly: was that a real footstep in the hall? There comes a moment when people who have been dabbling in religion (“Man’s search for God”!) suddenly draw back. Supposing we found Him? We never meant it to come to that! Worse still, supposing He had found us?So it is a sort of Rubicon. One goes across; or not. But if one does, there is no manner of security against miracles. One may be in for anything.4"

In other words, if God exists any miracle is possible. As we have reason to believe God exists (as we've discussed elsewhere on the blog - HERE or HERE for example), we can't simply reject all claims of the miraculous out of hand. Of course, that doesn't mean every claim of a miracle must be accepted, but the kind of a priori methodological philosophical decision to discount all miracles from the start is irrational.

With that purification, and a few other caveats discussed by Benedict in the forward of the first volume of his Jesus of Nazareth series, the historical-critical method can remain a powerful tool for understanding the Holy Texts of Christianity all the better.
_________________
1. Benedict XVI, Jesus of Nazareth Holy Week From the Entrance Into Jerusalem To The Resurrection, forward xiv
2. Now when Jesus heard this, he withdrew from there in a boat to a lonely place apart. But when the crowds heard it, they followed him on foot from the towns. As he went ashore he saw a great throng; and he had compassion on them, and healed their sick.  When it was evening, the disciples came to him and said, “This is a lonely place, and the day is now over; send the crowds away to go into the villages and buy food for themselves.” Jesus said, “They need not go away; you give them something to eat.” They said to him, “We have only five loaves here and two fish.” And he said, “Bring them here to me.” Then he ordered the crowds to sit down on the grass; and taking the five loaves and the two fish he looked up to heaven, and blessed, and broke and gave the loaves to the disciples, and the disciples gave them to the crowds.  And they all ate and were satisfied. And they took up twelve baskets full of the broken pieces left over. And those who ate were about five thousand men, besides women and children. (RSV)
3. Exegesis refers to the process of "drawing out" the meaning inherent in the text. Eisegesis, on the other hand, is the process of "reading into" a text the preconceived convictions of the interpreter. Matthew 14:13-21clearly intends to relate a miracle. Exegesis recognizes this. Eisegesis tries to "dance around" the meaning the text is trying to convey to accommodate the a priori suppositions of the reader.
4. Lewis, CS, Miracles