Long time readers of the blog might well be aware of my love for Dante Alighieri's La Commedia (The Divine Comedy). This book, my favorite, played an essential role in my conversion from irreligion (as I detail in my yet unfinished conversion story, keep an eye out). I recently picked up a copy with the complete set of Gustave Doré's famous illustrations and decided to make the journey from the pit of Hell and sin to the very face of God with Dante for the fifth time. This time, I thought I'd invite you along via the blog. Pick up a copy (Mark Musa

are all great choices) or just read the posts, but please join me on this most dramatic trip with the most talented author mankind has yet produced. Let's follow the example of Dante and get right into the action... 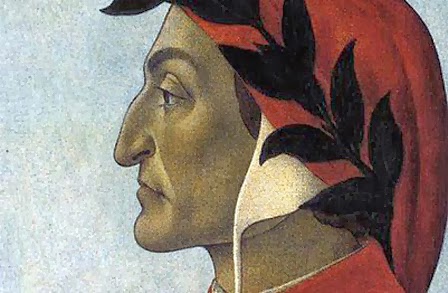 No, I don't expect you to be able to read Italian (although it is the most beautiful language in the world and is well worth the effort in learning), the idea here is to just take a second and go over those last words,

Notice anything? Ah, the rhyme scheme. Yes, Dante's famous terza rima invented by our Poet for use in his Commedia. The last word in the first and third line of each three line stanza rhyme. The middle line establishes the rhyme for the next couple. Thus we have ABA BCB CDC etc through the whole poem. This not only "locks" the text of the poem into an impressive whole, it also brings the number three constantly to mind, at least subconsciously, through the entire poem. Three, of course, represents the Trinity, the very nature of God. This impressive feat doesn't work well in any translation, so it is best to, at the beginning, deal with a little of Dante's own words before continuing on the journey. Let's do so now.


When we first meet our Pilgrim (remember Dante is both the Author of the Comedy and the principle character) we find him, on Good Friday in the year 1300, lost in "una selva oscura," a "dark forest." This abysmal and fearsome forest represents the depths of sin which Dante has lost himself in the middle of his life's journey. He turns to flee from the forest of sin, up the mountain of joy and life, but his way is blocked by three beasts, each representing the very sins he wishes to escape - a leopard (representing fraud and malice), a powerful lion (representing violence), and a she-wolf (representing incontinence). These three beasts, as representatives of the three main classes of sin, also are heralds of the three major divisions of Hell. Dante, confronted with these powerful beasts, loses heart and flees from the mountain he wished to climb. As he turns away he finds the greatest of all Italian poets (Virgil) who declares his intention of taking Dante through Hell (as Virgil, the author, once did with Aeneas in his masterpiece the Aeneid). If Dante isn't willing to directly confront sin in his own life, it seems, he will need a tour of sin's eternal wages to bolster his spirits. Faced with little choice (he fears the beasts and the forest and implicitly trusts his hero Virgil) Dante will trudge forward.

However, as we enter Canto II, Dante, upon seeing the fearsome maw of Hell, has a change of heart (wouldn't you?) Even the presence of his long dead hero isn't enough to form the resolve necessary to take the first steps on this dread journey. Virgil, sensing Dante's weakening resolve, explains to him how he, Virgil, came to the aid of our Pilgrim at the specific request of three heavenly ladies - Beatrice (Dante's chivalric love and the personification of holiness), St. Lucy, and finally Our Lady. With such ladies as these providing protection and prayer for Dante, he decides to walk into Hell, taking his first steps toward his own salvation...


"Let us start, for both our wills, joined now, are one.
You are my guide, you are my lord and teacher."
These were my words to him and, when he moved,

I entered on that deep and rugged road.1