WHO WAS CHARLEMAGNE?
You are probably familiar with the name of the first Holy Roman Emperor, Charlemagne. He was the greatest of the medieval kings, the first man to be crowned a Roman Emperor (on Christmas Day, AD 800) in the west since Romulus Augustulus was deposed by the barbarian Odoacer, King of the Goths, in the late fifth century. Charlemagne, or Carolus Magnus "Charles the Great", nearly single-handedly dragged Europe back from the brink of cultural collapse by largely unifying post-Roman Europe, supporting the Holy Catholic Church, and patronizing learning and the arts. His reign launched what has since been called the "Carolingian Renaissance." 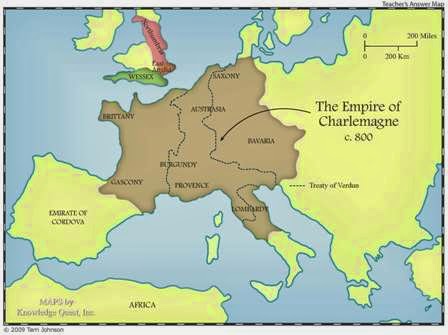 WHAT DOES CHARLEMAGNE HAVE TO DO WITH LENT?
I'd like to take a moment to look at how seriously this great emperor took the season of Lent, in the hopes that we can be inspired by his example. To this end, we're going to look at a few passages written by Notker the Stammerer, a contemporary of Charlemagne. As you read these brief passages, think to yourself, if an emperor, a man who can have anything he wants at the mere snap of his fingers, a man who ruled most of Europe, took Lent with such seriousness, how can I redouble my efforts here in the last weeks of this Lent.


Charlemagne... had the habit of eating at the seventh hour in Lent, that is after Mass had been celebrated and after evening lauds.By doing so he was not breaking the fast, but was obeying the Lord's command by taking food an hour before the time. (Charlemagne, Notker the Stammerer)

Here we learn that Charlemagne would fast from the time he rose in the morning until "the seventh hour", about noon, every day during Lent. This would be a mighty fast for us moderns, but Charlemagne was actually accused by a bishop for being too lax, for breaking the fast before nightfall. Charlemagne, enraged at being dressed down by this bishop devised a particular means of proving a point


'My worthy bishop, he (Charlemagne) answered, 'you have been within your rights to criticize me. In return, I order you to eat nothing yourself until the last of the officials who belong to my court here has been fed.' (Charlemagne, Notker the Stammerer)

At Charlemagne's court kings, princes, dukes, and various servants gathered to eat with their ruler. The meal was served out by rank, with the higher ranking noblemen eating first. Of course, the emperor ate first. Even with Charlemagne breaking the fast earlier than nightfall, the last man served (the bishop who rebuked him) wasn't fed until after midnight. Thus, as the bishop painfully learned, the emperor only ate while the sun was up to make sure the least in his court would be able to eat before the days end. Again, this was a fast every day for all of Lent and was observed on top of abstaining, again everyday for all of Lent, from meat. This later observance was so important to Charlemagne that he required it to be observed in his famous Capitulary on Saxony (AD 785):


4. If any one, out of contempt for Christianity, shall have despised the holy Lenten fast and shall have eaten flesh, let him be punished by death. But, nevertheless, let it be taken into consideration by a priest, lest perchance any one from necessity has been led to eat flesh.

While we might at first react with shock at the severity of the penalty, we have to keep in mind that this was the eighth century when use of capital punishment was widely applied to serious offenses due to a lack of other means of punishment (there were no prisons, after all). Lesser offenses were punished with fines. We will also want to keep in mind that Charlemagne was in the process of converting the Saxons from paganism and laws like these were put in place to aid this process. In fact, once the initial shock of the punishment subsides, we might be more surprised at how Charlemagne put two protections into his law. First, to be punishable, the fast had to be ignored "out of contempt for Christianity" and second, the case had to go before a priest to make sure the fast wasn't broken out of necessity.

Nonetheless, there can be little doubt that both Charlemagne and his subjects took Lent with great seriousness.

THE CHALLENGE
And so, in the spirit of our heroic Catholic forefathers, I'm issuing a Lenten Challenge to my fellow modern Catholics, let's observe the old time fast for just Holy Week. We'll make it simple and just follow two rules:

Charlemagne and his fellow eighth century Catholics kept this fast for all of Lent (and abstained from other foods besides). Our challenge is just one week. What do you think?


It is written, Not in bread alone doth man live, but in every word that proceedeth from the mouth of God. (Matt 4:4)