"A Mass, a Mass, My Kingdom for a Mass!" - Richard III Finally Receives His Due

Yesterday, on the Feast of the Annunciation (the day our Lord become Flesh and dwelt among us), King Richard III of England received the requiem Mass (in Latin) that he would have wanted had he not been betrayed by the usurper Henry Tudor (father of the arch-schismatic Henry VIII).  As we've been following this story (HERE), I thought it would be well to report the happy news. From Catholic News Agency, 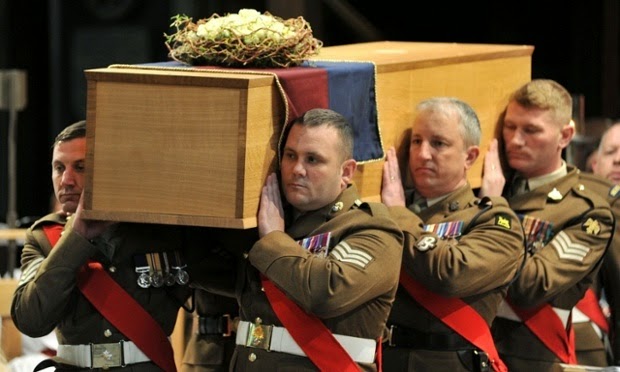 Nottingham, England, Mar 25, 2015 / 02:25 pm (CNA/EWTN News).- In preparation for the reinternment of the remains of Richard III, a 15th century English king whose body was only recently rediscovered, Cardinal Vincent Nichols of Westminster has offered Compline and a Requiem Mass for the late monarch....Cardinal Nichols noted Richard's achievements, including a development of the presumption of innocence, the concept of blind justice, the practice of granting bail, and translating laws into the vernacular, while adding that “nevertheless his reign was marked by unrest and the fatal seepage of loyalty and support.”... He recalled Richard as a man of prayer and “anxious devotion,” who composed a surviving prayer and established chapels....Cardinal Nichols remarked during his homily that “during this week, Mass is being offered in many Catholic Churches for the repose of the soul of King Richard III. Rightly so. That is exactly what he would have wished, having himself set up at least one chantry chapel for Masses to be celebrated for the dead of both sides of the Battle of Towton in 1461.”

The whole article, Catholics in England gather to pray for Richard III, one of their own, is well worth reading. Cardinal Nichols had some very powerful things to say.

Say what you will about Richard, whose image in the popular conscience is entirely shaped by Shakespeare's great play (people do still read Shakespeare, don't they?), he seems, by all accounts, to have been a faithful Catholic, if a flawed leader of men. Whether or not England would have abandoned the ancient and Holy Faith under the house of York as it would under the usurping House of Tudor is unknowable. However, the lack of respect for the legitimate and lawful spiritual power (The Pope) by Henry VIII is surely reflected in, and maybe would be unthinkable without, the lack of respect for the legitimate and lawful temporal power (Richard III) by Henry VII. What our world (and indeed our country) would look like with a Catholic England is something left for the imagination of a Newt Gingrich "what-if" book. We are instead left to deal with the challenge of reestablishing the Holy Faith in England (which is moving along well, as accounts of more Catholics at Mass than Anglicans at "service" on any given Sunday show).

Please join me in praying for Richard's soul in word's he would have well known himself,