Dr. Edward Feser, a well respected philosopher, author,  and professor developed a nice analogy to show where the thinking of atheists goes awry on the subject of God and why this basic first misstep effectively derails any intelligent conversation between theists and atheists. He uses two people looking at a painting in a gallery to represent the two sides in the theist-atheist debate (emphasis original):


Suppose you’re looking at a painting of a crowd of people, and you remark upon the painter’s intentions in producing the work.  Someone standing next to you looking at the same painting -- let’s call him Skeptic -- begins to scoff.  “Painter?  Oh please, there’s no evidence of any painter!  I’ve been studying this canvas for years.  I’ve gone over every square inch.  I’ve studied each figure in detail -- facial expressions, posture, clothing, etc.  I’ve found plumbers, doctors, dancers, hot dog vendors, dogs, cats, birds, lamp posts, and all kinds of other things.  But I’ve never found this painter of yours anywhere in it.  No doubt you’ll tell me that I need to look again until I find him.  But really, how long do we have to keep looking without success until people like you finally admit that there just is no painter?”Needless to say, Skeptic, despite his brash confidence, will have entirely misunderstood the nature of the dispute between you and him.  He would be making the crudest of category mistakes.   He fundamentally misunderstands both what it means to say that there is a painter, and fundamentally misunderstands the reasons for saying there is one. (source)

Too often atheists treat God - the God we theists actually believe in, that is - as if He were a big bearded guy living on a cloud somewhere. Their arguments (like the comparison between God and a "Flying Spaghetti Monster") would be devastatingly power, if we were pagans worshipping Mars or Thor or the Eagle Spirit (that is being that are a part of the world) but completely miss the point when talking about the God we actually believe in, and the God men like Abraham, Aquinas, Augustine, Aristotle, and Plato believed in. This God is the Creator of the material world (just like Leonardo is the creator of the Last Supper) and it makes just about as much sense to look for God within the world as does to look for Leonardo in his painting. For an atheist to say "Aha! God isn't in the material world at all!!" is for him to say the exact same thing we theists have been saying for the last few thousand years and is certainly no proof against God's existence. It would be like me claiming Richard Dawkins doesn't exist because I throughly searched my entire garage - every square inch, mind you - and not a trace of Dr. Dawkins was to be found! Of course, not. He simply isn't where I'm looking and no one ever thought he was in the first place. Or would be like a zoologist announcing to the world that elephants don't exist after an exhaustive study of the antarctic where he found not a trace of a single specimen. Such absurdities can't be argued with, they can only be chuckled at. 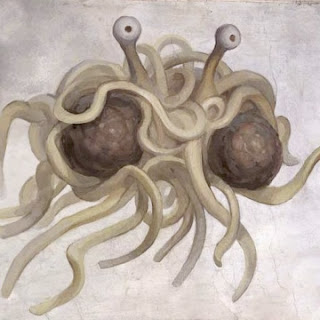 You can disprove the existence of Zeus by scaling Mount Olympus and finding it empty, but can't disprove the existence of an immaterial God by searching the material world and declaring you haven't found Him - of course you haven't, no one ever claimed He was there in the first place.  And scaling Mount Olympus is all "arguments from science" ultimately are in the search for God. Science necessarily is limited to exploring, studying, analyzing, and describing the material world, the immaterial is entirely beyond its ability to comment on. Science can say nothing whatsoever about it, including whether or not immaterial realities exist (which of course, science itself depends on, especially the existence of immaterial numbers, but that is a post for another day). Such is simply "the crudest of category mistakes" at best or the most obvious of straw man arguments at worst.


By the way, Dr. Feser's book on Thomas Aquinas is an absolute must read. I've read many books on the thought of Aquinas and recommend this one without hesitation. If you haven't read it, you're really missing out.

I've heard good things about his book specifically addressing the "New Atheism" (he was once an atheist himself), but I haven't read it yet,