Cause Enough to End Communion in the Hand Immediately?

I'm sure most of my readers have heard about the Satanist group that claims to have gotten ahold of a stolen Consecrated Host for their upcoming "Black Mass" in OKC. Apparently the host was stolen from a Catholic Church by a "friend" of Adam Daniels, the organizer of the Black Mass. This, of course, is the most grievous of all possible blasphemes, the ugliest of all possible desecrations, indeed nothing could be more noxious, more evil, or more offensive than the desecration of the Most Holy Eucharist. The Code of Canon Law reminds all Catholics of the importance of the Eucharist in the life of the Church:


Can.  897 The most August sacrament is the Most Holy Eucharist in which Christ the Lord himself is contained, offered, and received and by which the Church continually lives and grows. The eucharistic sacrifice, the memorial of the death and resurrection of the Lord, in which the sacrifice of the cross isperpetuated through the ages is the summit and source of all worship and Christian life, which signifies and effects the unity of the People of God and brings about the building up of the body of Christ. Indeed, the other sacraments and all the ecclesiastical works of the apostolate are closely connected with the Most Holy Eucharist and ordered to it.

Can.  898 The Christian faithful are to hold the Most Holy Eucharist in highest honor, taking an active part in the celebration of the most august sacrifice, receiving this sacrament most devoutly and frequently, and worshiping it with the highest adoration. In explaining the doctrine about this sacrament, pastors of souls are to teach the faithful diligently about this obligation. 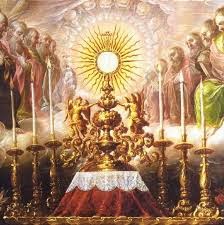 The Archbishop of Oklahoma City, His Excellency Paul Coakley, has compared this act of sacrilege with acts against other religions which would never be allowed on public property:


“It is hard to imagine the Civic Center turning a blind eye and allowing a group to use its facilities to burn a copy of the Koran, or to conduct an overtly anti-Semitic performance”

Hard indeed. Unfortunately, anti-Catholicism is alive and well in this country (as it has always been), so this infamous act goes on while acts against other religions are opposed as hate speech. Apparently, hate speech against the most sacred mysteries of the Catholic faith (with her 78 million US members, the largest Church in the US) is a-okay. Unfortunate, but unsurprising.

While we can't take much direct action to stop the proposed Black Mass from happening. This great evil doesn't have to happen again. The "most August sacrament" can be better protected, indeed must be better protected. One such way is the immediate suspension of Communion in the hand. How easy is it for a Satanist to slip into any Catholic Church anywhere in these United States, casually walk up the aisle when the Host is being distributed, stretch out his/her hand and simply walk back to the pew without consuming the Host? How many Extraordinary Ministers of Holy Communion (many of whom are elderly women) are even prepared for this possibility? Who is even watching enough to notice whether or not the Sacrament is being carried off? And if someone does notice, what is anyone prepared to do about it that will actually stop a determined Satanist?


Church law is pretty clear on the difference between Communion on the tongue, which we all have a right to, and Communion in the hand, which is only to be allowed where there is no "risk of profanation":

Although each of the faithful always has the right to receive Holy Communion on the tongue, at his choice, if any communicant should wish to receive the Sacrament in the hand, in areas where the Bishops’ Conference with the recognitio of the Apostolic See has given permission, the sacred host is to be administered to him or her. However, special care should be taken to ensure that the host is consumed by the communicant in the presence of the minister, so that no one goes away carrying the Eucharistic species in his hand. If there is a risk of profanation, then Holy Communion should not be given in the hand to the faithful. (Redemptionis Sacramentum 92)


Clearly, the risk of profanation in the United States is much higher than anyone thought. Such a risk demands an immediate rethinking of the propriety of continuing to administer Communion in the hand across the US. Perhaps in special cases, where the priest knows the recipient, and where the recipient has a particular need to receive in the hand such reception could be accommodated, but to continue to distribute the Host in the hand of all and sundry has created an environment where the "risk of profanation" has blossomed into a full on Satanic Mass complete with Consecrated Host.

Of course, the United States Bishops are in a better position than you or I to determine if such a measure needs to be undertaken or not. It is their sacred charge to handle such matters and, with the guidance of the Holy Spirit, they are sure to take whatever steps they deem necessary to minimize possible future desecration of the Body, Blood, Soul, and Divinity of God Himself. In the meanwhile, let's all join together in praying to St. Michael, defender of the Church and destroyer of Satan:

St. Michael the Archangel, defend us in battle
Be our protection against the wickedness and snares of the devil,
May God rebuke him we humbly pray.
And do thou, O Prince of the Heavenly Host, by the Divine Power of God,
Cast into hell Satan and all the evil spirits roaming about the world
Seeking the ruin of souls.
Amen.


What do you think? Should Communion in the hand be restricted to prevent future desecrations or is such an action too much too soon for the current situation? Would requiring Communion on the tongue be a prudent safeguard or an overreaction to one horrible incident?
Posted by Nathan Barontini at 8/08/2014 08:58:00 AM