The Three Advents of Christ

It's Advent. As you probably know 'advent' comes form the Latin word 'adventus' meaning 'coming' and is, of course, the liturgical season in which we prepare for the coming of Christ. In Ancient Rome, adventus referred to a special ceremony in which the emperor was welcomed back into the city after a successful military campaign. Before the emperor arrived, he would be proceeded by messengers announcing the evangelium, the gospel, the good news, of the emperor's victory. The early Christians, recognizing Christ as the true emperor, celebrated His coming, His adventus, and so we do today.

What you might not have known is that Christ has three Advents and the Church wants us to call all three to mind during the Advent season. Let's take a look at each of them.

The First Advent of Christ
The first coming of Christ is the one we are most familiar with, the one we most naturally focus our minds on this time of year, Christ's coming as a babe wrapped in swaddling clothes in the stable in Bethlehem (cf. Luke 2:12). Why would the Lord of Lords come in such a humble manner? Why not come as the High Priest in Jerusalem? Why not as Caesar? C.S. Lewis, in Mere Christianity, gives the answer, (emphasis added)


"enemy occupied territory - that is what this world is. Christianity is the story of how the rightful king has landed, you might say landed in disguise, and is calling us to take part in a great campaign of sabotage." 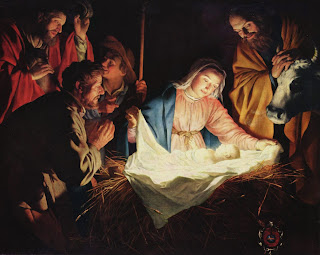 The Second Advent of Christ
The second coming of Christ is the one we are perhaps least familiar with, although it's the one we have the most experience with. It's His coming into the life of each believer. In The Gospel of St John, Jesus assures those who love Him that He "will not leave (us) comfortless: I will come to you" (14:18) and in Matthew He tells us, "lo I am with you always, even unto the end of the world" (28:20). This, of course, is accomplished in heart of every believer when they convert, when they "accept Jesus as Lord and Savior" as our Evangelical friends are fond of saying. This also happens, because we are a psychosomatic unity (a union of body and soul), when Christ comes to us physically in the Holy Eucharist every time we receive Him at Mass. Jesus doesn't feed only half of us. He comes to us spiritually when we accept Him into our heart, but He also comes to us bodily.  In a real sense each Mass is a mini parousia, and thus is a mini Advent. 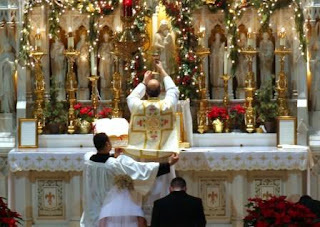 The Third Advent of Christ
The third coming of Christ is His final coming at the world's end. Here He comes not veiled as a baby or hidden under the accidents of bread and wine, but in His full awful majesty. Here He comes to separate the goats from sheep, turning to the unrepentant and speaking the most fearsome words a man can hear, "Depart from me, you acursed, into the eternal fire prepared for the devil and his angels" (Matt 25:41). This is the Dies Irae, the day of wrath, from which none can hide. The dead will be raised, the just rewarded with life eternal, and the damned sent to the fires of Gehenna. This is the final Adventus, the one which all creation groans for as if in childbirth (Rom 8:22), the one for which we Christians call out, "Veni, Domine Jesu, Marana tha Lord Jesus, Come, Lord Jesus! (cf. 1 Cor 16:22).