The Catholic Church is a House of Prayer for All People - A Reflection on the First Reading from the 12th Sunday in Ordinary Time (Aug 17, 2014)

This week I'd like to take a second to take a close look at the prophecy we will hear in the first reading at Mass tomorrow from the Book of Isaiah:

Thus says the LORD:Observe what is right, do what is just;for my salvation is about to come,my justice, about to be revealed.The foreigners who join themselves to the LORD,ministering to him,loving the name of the LORD,and becoming his servants—all who keep the sabbath free from profanationand hold to my covenant,them I will bring to my holy mountainand make joyful in my house of prayer;their burnt offerings and sacrificeswill be acceptable on my altar,for my house shall be calleda house of prayer for all peoples. (Is 56:1, 6-7)

Here we see something very particular being promised by God - that His people, His family, will one day expand past the ethnic descendants of Abraham and encompass all of humanity. God, through His prophet, announces the coming of a day when His name will be loved and His covenant kept by men of all nations and races. While this promise is partially fulfilled in the Old Testament, we only finally what exactly God had in store for the world after the Resurrection and Ascension of Jesus Christ. The first hints of the fulfillment of this prophecy can be seen in the apostle's Pentecost preaching, which is understood by all men in their own language. Here we see the barriers that once separated God's people from their neighbors begin to be pulled down as the New Testament People of God - the Catholic Church - comes to truly be a "house of prayer for all peoples."

Which can be compared with any post-Reformation Christian "denomination" favorably, for example Lutheranism (which is internally divided between different groups with competing theologies):

or even with Eastern Orthodoxy (which is itself broken up into several national churches): 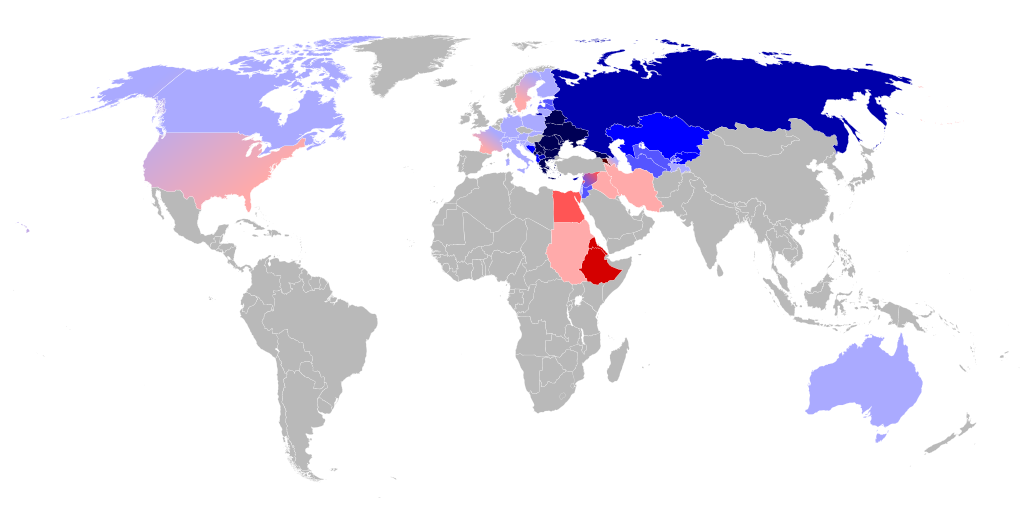 The same thing can be measured through time as well as through space. Here is a map of the religions of Europe circa 1200 (try to find the Protestants) 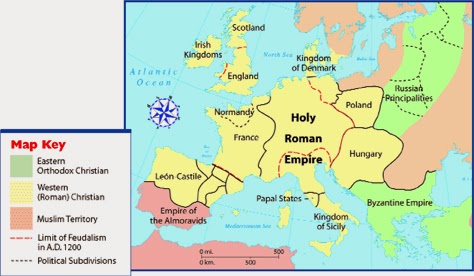 From even a cursory glance at these maps (and others for any Christian group could be found to replicate this pattern) we can see the sad tendency for Christians outside of God's established Church to quickly abandon the "house of prayer for all peoples" model which God wills for His family and instead to subdivide into ethnic, linguistic, and nationalistic "churches" which frequently develop theological novelties that combine God's unmixed revelation (as found with the Catholic Church) with various ideas current in their societies. Thus we find authentic Christianity mixed with twenty-first century confusion of the differentiation of appropriate sex roles in the national "church" of England giving us the novelty of women "bishops." Or we find authentic Christianity mixed with the biases of a literate society producing the novel concept of the sufficiency of the Bible "and the Bible alone." Or we find authentic Christianity mixed with American individualism giving us the modern Evangelical movement with its "personal relationship with Jesus" as the beginning and end of the Christian life.

These novelties, growing from the spirit of the culture the splinter Christian group exists in, are then misunderstood, frowned upon, or outright rejected by other Christians in other cultures, sometimes even from within the same "denomination," which tends to lead to yet more fracturing of Christians into even smaller groups which appeal more to the spirit of their own cultures and times.

Such a situation is clearly against the will of God, who desires all men to receive one truth from one Church and become one family, the family of God. Such unity, over both time and place, has historically only been seen within the Holy Catholic Church - which is indeed a "house of prayer for all peoples," which alone fulfills the prediction of the prophet Isaiah over 27 centuries ago.