Should Catholics Receive Communion if they Don't Believe Everything the Church Teaches?

My post yesterday received this very thoughtful comment, one which I thought deserved an extended answer as many Catholics are very confused over this particular teaching.


As to how to handle the fact that the asker is voicing something in conflict with the teachings of the Catholic church, I think that's a point that people have different viewpoints on. We all know the official church stance on the matter...but in practice, how many Catholics who take communion every week, really believe everything that the church professes? I'd be willing to bet there are *priests* who don't believe this. Whether these priests are "out of line" somehow...that's a different question. Again, I know the official Catholic stance on this.

But I'm not Catholic, and I don't feel like, in my own moral system, I want to condemn or judge people who take communion and don't agree with everything that the church teaches.Keep in mind that many people only are Catholic because they were raised Catholic, often put under great pressure to do so. In many regions, people are Catholic because they are religious, and because Catholicism is the only religion present (or perhaps, the only one they want to participate in--being forced to choose between participating in Catholicism, evangelical Christianity, or no religion is not much of a choice).

So I want to challenge your comment about receiving the Eucharist without holding the entire Catholic Faith being nothing less than publicly lying. I disagree. People can interpret it that way, if they choose, and that interpretation may be consistent with the Catholic church's official teachings, but this doesn't mean that it's true in a global sense...and it's certainly not something that there would be a consensus on in society as a whole.

I think that if you asked different people (including both Catholics and non-Catholics) you'd get a lot of different answers, and I suspect you wouldn't find all that many people who agreed with that statement, even if it is consistent with the official church stance.


First, thanks for the thoughtful comment. Where I see you going astray is in creating a false dichotomy between "official Catholic teaching" and the opinions of Catholics. The Church has the authority to decide what it teaches. Those who disagree with the Church on a particular issue aren't so kind of alternative "Magisterium of conscience", they are in error. Remember, Jesus gave the authority to settle disputes, not to individual Christians armed with printed Bibles (which the last 500 years clearly shows doesn't work), but to the Church:


"If your brother sins against you, go and tell him his fault, between you and him alone. If he listens to you, you have gained your brother. But if he does not listen, take one or two others along with you, that every word may be confirmed by the evidence of two or three witnesses. If he refuses to listen to them, tell it to the church; and if he refuses to listen even to the church, let him be to you as a Gentile and a tax collector. Truly, I say to you, whatever you bind on earth shall be bound in heaven, and whatever you loose on earth shall be loosed in heaven." (Matthew 18:15-18 RSV)

Why this is is explained by Christ,

Further, I'd note, that in Catholic theology, receiving the Eucharist is a public statement of being in union (communion, "comm-union") with the Church, which entails accepting her authority and thus professing what she professes. It is exactly for this reason that non-Catholics cannot be admitted to Communion, even non-Catholics who believe in transubstantiation.


We welcome our fellow Christians to this celebration of the Eucharist as our brothers and sisters. We pray that our common baptism and the action of the Holy Spirit in this Eucharist will draw us closer to one another and begin to dispel the sad divisions which separate us. We pray that these will lessen and finally disappear, in keeping with Christ's prayer for us "that they may all be one" (Jn 17:21).Because Catholics believe that the celebration of the Eucharist is a sign of the reality of the oneness of faith, life, and worship, members of those churches with whom we are not yet fully united are ordinarily not admitted to Holy Communion. (Statement of the US Bishops on the reception of Holy Communion) 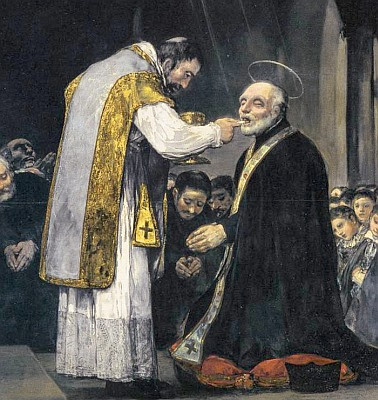 Receiving communion in the Catholic Church is a liturgical, ritual, statement that says nothing less than "I am in full union with Christ and His Holy Catholic Church by professing all the Church teaches." This teaching has been with the Church from the very beginning and is not dependent upon any individual Catholics agreement with it.

"Take note of those who hold heterodox opinions on the grace of Jesus Christ which has come to us, and see how contrary their opinions are to the mind of God....They abstain from the Eucharist and from prayer because they do not confess that the Eucharist is the flesh of our Savior Jesus Christ, flesh which suffered for our sins and which that Father, in his goodness, raised up again. They who deny the gift of God are perishing in their disputes" - Ignatius of Antioch, circa 110 AD.

"We call this food Eucharist, and no one else is permitted to partake of it, except one who believes our teaching to be true and who has been washed in the washing which is for the remission of sins and for regeneration and is thereby living as Christ enjoined. For not as common bread nor common drink do we receive these; but since Jesus Christ our Savior was made incarnate by the word of God and had both flesh and blood for our salvation, so too, as we have been taught, the food which has been made into the Eucharist by the Eucharistic prayer set down by him, and by the change of which our blood and flesh is nurtured, is both the flesh and the blood of that incarnated Jesus" Justin Martyr, circa 151 AD

Even if every pew sitting Catholic disagreed with this teaching it would still be true (truth isn't determined by popular vote). Think of it like this. Once upon a time most people thought the world was still and the sun circled it. Did "most people" thinking so change reality? Of course not. Most people were simply wrong. The same is true for heterodox Catholics who pick and choose which teachings to believe. They simply are wrong.  Or look at a religious doctrine. If most Christians didn't believe that Jesus rose from the dead, would that mean He didn't? Of course not. Reality isn't determined by what we think, it is what it is. Likewise, receiving Communion in the Catholic Church is publicly declaring that you believe everything the Church does and thus are in union with her. This objective fact is not changed whether or not ordinary Catholics assent to the teaching or not.

The Bible Christian Society puts it well when they write,