O Sacred Silence! A Reflection on the Gospel for the 19th Sunday of Ordinary Time

In this week's Gospel we hear,


After he had fed the people, Jesus made the disciples get into a boatand precede him to the other side,while he dismissed the crowds. After doing so, he went up on the mountain by himself to pray. When it was evening he was there alone. Meanwhile the boat, already a few miles offshore,was being tossed about by the waves, for the wind was against it. During the fourth watch of the night,he came toward them walking on the sea. When the disciples saw him walking on the sea they were terrified. “It is a ghost,” they said, and they cried out in fear. At once Jesus spoke to them, “Take courage, it is I; do not be afraid.” Peter said to him in reply,“Lord, if it is you, command me to come to you on the water.” He said, “Come.” Peter got out of the boat and began to walk on the water toward Jesus. But when he saw how strong the wind was he became frightened;and, beginning to sink, he cried out, “Lord, save me!” Immediately Jesus stretched out his hand and caught Peter,and said to him, “O you of little faith, why did you doubt?” After they got into the boat, the wind died down. Those who were in the boat did him homage, saying,“Truly, you are the Son of God.” (Mt 14:22-33)

While this passage is replete with material for reflection, I want to take but a moment to look at a short section. At the beginning we see Our Lord, fresh off of feeding the 5,000 who then wanted to make Him their king (recognizing this as a sure sign that He was indeed the long awaited Messiah), send off His disciples and remove Himself for communion with His Father.


he went up on the mountain by himself to pray. When it was evening he was there alone. 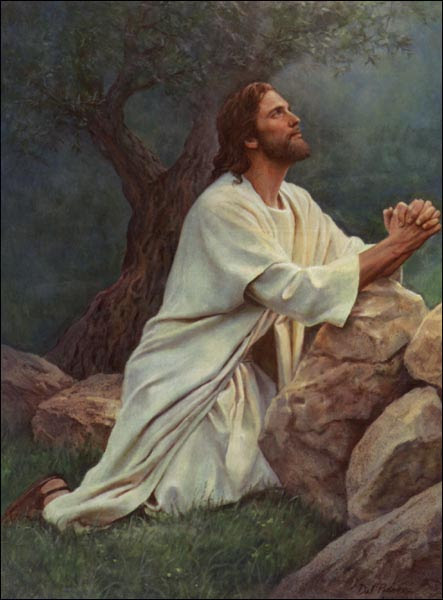 How important it is to make time to be alone with The Lord! How essential it is for the spiritual well being of each and every man, woman, and child that even Jesus removed Himself from the throngs calling for His kingship and from His most trusted circle of friends to simply be alone with His Father!

The intimate time we spend alone with The Lord, away from the multitude of distractions of modern life, away from our iPhones and iPads, away even from our most beloved and trusted friends and family, and certainly away from the constant soundtrack of music and noise that pervades our lives, is sine qua non for those who seek familiarity with God and growth in holiness.

Thus, I urge you to find some time to be quiet, to be alone with God. Listen for Him not in whirlwind, but in a "small still voice" (cf. 1 Kings 19) which can only be heard in silence. Take a walk through the woods and pray, find a quiet spot at home (unless you have a bunch of kids running around like I do, then such a place simply doesn't exist at home), or best of all head to church and pray before the tabernacle - or if you are so lucky before the Eucharist in your adoration chapel. Make sure to set a regular time to do this. Start with once a week or even once a month, but make it regular. Guard this time jealously. Don't allow the world to snatch it from you. Use it to get to know The Lord in silence, "alone," and you'll become a better friend, neighbor, father, mother, student, employee, boss, etc.

For it is Satan, not The Lord, who would love to see the world filled with an all consuming noise, as C.S. Lewis so brilliantly foresaw,


“My dear Wormwood: Music and silence–how I detest them both! How thankful we should be that ever since our Father entered Hell–though longer ago than humans, reckoning in light years, could express, no square inch of infernal space and no moment of infernal time has been surrendered to either of those abominable forces, but all has been occupied by Noise–Noise, the grand dynamism, the audible expression of all that is exultant, ruthless, and virile–Noise which alone defends us from silly qualms, despairing scruples, and impossible desires. We will make the whole universe a noise in the end. We have already made great strides in this direction as regards the Earth. The melodies and silences of Heaven will be shouted down in the end. But I admit we are not yet loud enough, or anything like it. Research is in progress.” (The Screwtape Letters, written from the perspective of a "senior" demon from hell, giving advice to a "junior tempter.")