Yesterday on the blog we looked at a great new statue recently blessed by Our Holy Father. In our reflections on the image we drew on Matthew 25, in which we learn that Christ will judge us according to how we treat the least among us, indeed He will consider such treatment as if it were done to Him.

Today, I want to provide a little balance to what was said yesterday.

We must be wary of reducing Christ to one dimension. This is the path of heresy, the path trodden by Arius (who reduced a Christ to a man who wasn't also God), the Docetists (who reduced Christ to God and not a man), and those 'scholars' who invent a never ending set of contradictory "historical Jesus" theories. What is the tempting reduction in the homeless Jesus statue? Forgetting He is also the King of Kings and Lord of Lords. Some Catholics can become so enthralled to the "poor fisherman from Galilee" that they cannot see the Pantocrator. But see the King they must, otherwise they fail to worship the real Christ, instead bowing before an idol of their own creation. 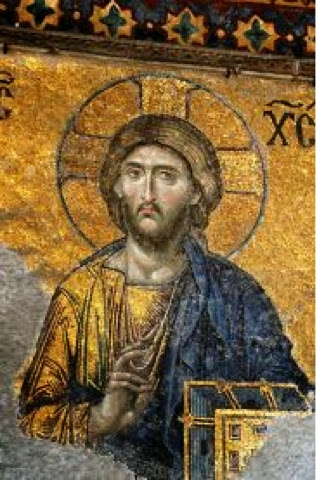 For Christ is both to be identified with the lowest and weakest among us and to be revered as the Almighty, as the King of Glory. He gives us this hermeneutic right in the very verses wherein He most closely idntifies Himself with the poor, right in Matthew 25, right in the same parable we looked at yesterday. When Christ tells of the future judgement and of his separation of the righteous and the wicked based on how they treated Him (as present in the poor and downtrodden), He refers to Himself thus (emphasis added)

"When the Son of Man comes in his glory, and all the angels with him, he will sit on his glorious throne. All the nations will be gathered before him, and he will separate the people one from another"

Like Aragorn (from The Lord of the Rings) - who is both Strider, slipping behind enemy lines and keeping his flock from harm, and the heir of Isildur, the rightful King of Gondor, Christ is both the poor Galilean born in a stable and the King who will return in Heavenly glory, to forget the one is to lose sight of the whole Christ, of The Lord. When we fail to keep the totus Christus squarely in view, we end up either forgetting the poor (and thus risk being counted Amon the wicked) or forgetting His Majesty (and risk denying His Divinity) and we see things like the "bishop of bling" on the one hand and the use of felt banners and clay chalices at Mass on the other. Let's call this last the "Indiana Jones heresy"  - forgetting that the homeless Galilean preacher (cf. Matt 8:20) is really the rightful King (cf. Rev 19:16) in disguise.

What do you think? Do you struggle to see Christ as both a poor first century Jew and the King of the Universe? Is one image easier for you? Why?