The Need for Silence

“The present state of the world and the whole of life is diseased. If I were a doctor and were asked for my advice, I should reply, 'Create silence'.”

That was in the first half of the Nineteenth century, before i-pods, CDs, records, radios, telephones, cars, TV sets, movies, computers, or the vast majority of the noise machines we have surrounded ourselves with. Simply put, he lived in a much quieter world than do we. Yet, his quote still stands. Life then, and more so now, is diseased (the theologians call this 'original sin'). The cure, or at least a necessary element for it, is silence.

C.S. Lewis, writing in 1942 (a much quieter time still than ours), put these words into the mouth of his "senior" demon Screwtape to the "junior tempter" Wormwood:

"Noise which alone defends us from silly qualms, despairing scruples, and impossible desires. We will make the whole universe a noise in the end. We have already made great strides in this direction as regards the Earth. The melodies and silences of Heaven will be shouted down in the end. But I admit we are not yet loud enough, or anything like it."

Hell hates silence. Why? Because the voice of God isn't, normally, thundering forth from the Heavens. The prophet Elijah hears God not in earthquakes or fires, but in a "small still voice." (cf. 1 Kings 19:12). That is why we need silence, so we can hear the voice of God in our lives. God is a gentleman, He won't shout at us.

In silence we come face to face with the realities of life and death. In silence we feel the weight of eternity (both Hell and Heaven) pressing down upon us. Noise distracts us. Noise makes us forget. Noise buries the "melodies and silences of Heaven." In Hell there is neither of these, no song and no silence, only unending noise.

This is why our liturgical worship must include both song and silence if it is to truly reflect the Heavenly Liturgy. Pope Emeritus (then Cardinal Ratizinger) wrote in his The Spirit of the Liturgy

"We are realizing more and more clearly that silence is a part of the liturgy. We respond, by singing and praying, to the God who addresses us, but the greater mystery, surpassing all words, summons to silence." 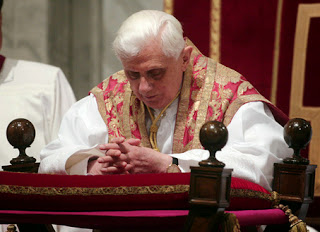 But silence isn't only for the Mass. Our whole lives are preparation for the Heaven (or Hell) that awaits us eternally beyond the grave. This advent practice silence. Practice being still and quiet with the Lord. Go to a Low Mass in the extraordinary form (the traditional Latin Mass). Go to Eucharistic Adoration. Or just turn down the constant noise of the world and be healed by silence.


How will you "create silence" in your life this Advent?