Yesterday Sacrosanctum Concilium, The Second Vatican Council's Constitution on the Sacred Liturgy, turned fifty years old. Below are some of its explicit instructions on how the Mass was to be said following the Council. As you read through these ask yourself, "does my parish celebrate the Mass as Vatican 2 wanted?" 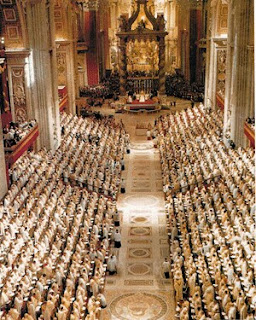 22. Regulation of the sacred liturgy depends solely on the authority of the Church...no other person, even if he be a priest, may add, remove, or change anything in the liturgy on his own authority.

36. Particular law remaining in force, the use of the Latin language is to be preserved in the Latin rites.

54...steps should be taken so that the faithful may also be able to say or to sing together in Latin those parts of the Ordinary of the Mass which pertain to them.

114. The treasure of sacred music is to be preserved and fostered with great care.

116. The Church acknowledges Gregorian chant as specially suited to the Roman liturgy; therefore, other things being equal, it should be given pride of place in liturgical services.

120. In the Latin Church the pipe organ is to be held in high esteem, for it is the traditional musical instrument which adds a wonderful splendor to the Church's ceremonies and powerfully lifts up man's mind to God and to higher things.

122. ... all things set apart for use in divine worship should be be truly worthy, becoming, and beautiful...The Church has been particularly careful to see that sacred furnishings should worthily and beautifully serve the dignity of worship

124... Let bishops carefully remove from the house of God and from other sacred places those works of art which are repugnant to faith, morals, and Christian piety, and which offend true religious sense either by depraved forms or by lack of artistic worth, mediocrity and pretense.