Have you seen the statue of Our Lord that Pope Francis blessed recently? It vividly portrays Christ as a homeless man, showing in bronze the identification He makes between the least of us and Himself.

It's a great reminder of Christ's words in Matthew 25 where He tells us that when He returns He will separate (eternally) the righteous from the wicked. He says He will turn to the righteous and say:

‘Come, you who are blessed by my Father; take your inheritance, the kingdom prepared for you since the creation of the world. For I was hungry and you gave me something to eat, I was thirsty and you gave me something to drink, I was a stranger and you invited me in, I needed clothes and you clothed me, I was sick and you looked after me, I was in prison and you came to visit me.’

When the righteous ask when they did such things for Christ, He responds:

‘Truly I tell you, whatever you did for one of the least of these brothers and sisters of mine, you did for me.

Then, to the wicked, who He consigns to the eternal fire, He says


When the damned wonder when they so mistreated The Lord, Christ replies:

Powerful words and a powerful image, one that reminds me of a similar statue on the grounds of Franciscan University of Steubenville. 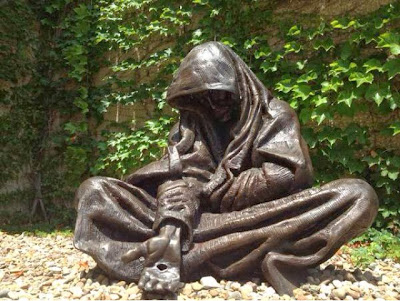 Mother Teresa, one of the great saints of the twentieth century, used to implore her sisters, who worked with the poorest of the poor, with this "five finger gospel." She would hold up a finger for each word and repeat the words of Christ, "you did it to me."

These images are great to meditate on during this Advent. While you look at them ask yourself, how have I treated Christ? What will He say to me when He returns (remember Advent is not just about Christ's first coming in Bethlehem, but also about His last coming, at the end of the world).

What do you think? Do you like these statues? Why or why not?