This is the time of year that many Catholics, if they are anything like me, begin to wonder how to deal with Santa Claus. Do we tell our kids the same things our secular neighbors tell their kids? Is it all just fun and games? 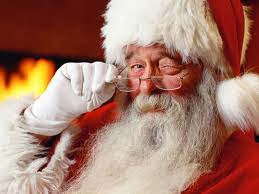 Or has Santa replaced Christ in our increasingly dechristianized society? Should we ban him from our homes as an anti-Christ (i.e. something undermining Christ on Christmas)? Is Santa just a shill for toy companies? Is he the high-priest of Mammon trampling Advent under his black boots with his Christmas season (Thanksgiving to December 25) preemptively striking Christ's (December 25 to Epiphany)?

The case for exorcizing Santa from our home seems strong. But then I read this from one of my favorite writers:

What has happened to me has been the very reverse of what appears to be the experience of most of my friends. Instead of dwindling to a point, Santa Claus has grown larger and larger in my life until he fills almost the whole of it. It happened in this way. As a child I was faced with a phenomenon requiring explanation.  I hung up at the end of my bed an empty stocking, which in the morning became a full stocking.  I had done nothing to produce the things that filled it.  I had not worked for them, or made them or helped to make them.  I had not even been good – far from it. And the explanation was that a certain being whom people called Santa Claus was benevolently disposed toward me. . . .  What we believed was that a certain benevolent agency did give us those toys for nothing. And, as I say, I believe it still.  I have merely extended the idea. Then I only wondered who put the toys in the stocking; now I wonder who put the stocking by the bed, and the bed in the room, and the room in the house, and the house on the planet, and the great planet in the void. Once I only thanked Santa Claus for a few dollars and crackers. Now, I thank him for stars and street faces, and wine and the great sea. Once I thought it delightful and astonishing to find a present so big that it only went halfway into the stocking.  Now I am delighted and astonished every morning to find a present so big that it  takes two stockings to hold it, and then leaves a great deal outside; it is the large and preposterous present of myself, as to the origin of which I can offer no suggestion except that Santa Claus gave it to me in a fit of peculiarly fantastic goodwill. -- G.K. Chesterton


Which gives me pause. I'm not saying I'll be dressing in a red suit this year, but I might have been to ready to condemn the jolly old elf. 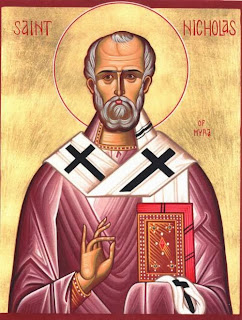 Perhaps the way out of the conundrum is to try focusing more on the man behind Santa - the fourth century bishop of Myrna, Nicholas. Bishop Nicholas was a selfless giver, patron of the poor and of children, a holy man of God, and a good Catholic. He even punched the heresiarch Arius at the Council of Nicea for denying the Divinity of Christ (my kind of saint)! Perhaps instead of milk and cookies, I can explain to the kids that St. Nicholas (i.e. Santa) is a saint in Heaven and, as such, is (temporarily) separated from his body, thus he won't be eating and that the real presents he brings are our prayers to the foot of the throne of Christ the King.

After all, Santa is real, just all the stories about him are not. We can get carried away by the puritanical spirit that these United States were founded on and forget that revelry, games, presents, and stories are all apart of Christmas. Of course they need to serve Christ (like all things) but they needn't be replaced with a dour faced "celebration" devoid of all fun. We are Catholics not Calvinists after all and as Hillaire Belloc once remarked 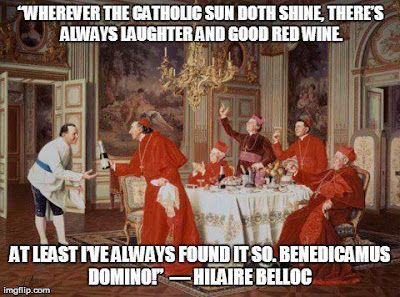 I suppose in the end, I will focus more on the "historical Santa" (perhaps Rudolf Bultmann, if still alive could write a book of that title) on the Catholic Saint without crushing the "commercial Santa" entirely. I won't actually tell the kids Ol' Saint Nick is watching them or will be bringing gifts and I won't leave letters or eat cookies on his behalf, but I won't crush their imaginations either, treating Santa more like Mickey Mouse and Superman than a demon to be destroyed at all costs.


What do think? Do you tell your children Santa is real? How will you handle the competing claims of Santa and Christ to this season? Does any of it even matter?
Posted by Nathan Barontini at 12/03/2013 10:25:00 AM