Quo Primum - Can the missal never be changed?

I attend both the forma extraordinaria (i.e. the "traditional Latin Mass" or "EF") and the forma ordinaria (i.e. the novus ordo Mass or "OF") of the Roman Rite. I do, however, love the EF. Because of my passion for the EF, I tend to follow some blogs of a more traditional bent. In so doing, I come, from time to time, across some crazy stuff, mostly of "the Church is in error on x, y, or z" type. One frequent myth is that Pope Saint Pius V, in his apostolic constitution Quo Primum, prohibited the kinds of changes Pope Paul VI made to the Mass after the Second Vatican Council. But did he? Let's take a look at what Pius actually said, with my emphases and comments as usual.

From the very first, upon Our elevation to the chief Apostleship, We gladly turned our mind and energies and directed all out thoughts to those matters which concerned the preservation of a pure liturgy, and We strove with God's help, by every means in our power, to accomplish this purpose. For, besides other decrees of the sacred Council of Trent, there were stipulations for Us to revise and re-edit the sacred books: the Catechism, the Missal and the Breviary... (I)ts most becoming that there be in the Church only one appropriate manner of reciting the Psalms and only one rite for the celebration of Mass... (using one rite shows the catholic, the universal, nature of the Church.)

Let all everywhere adopt and observe what has been handed down by the Holy Roman Church... and let Masses not be sung or read according to any other formula than that of this Missal published by Us. This ordinance applies henceforth, now, and forever (powerful words)…

This new rite alone is to be used …unless there has prevailed a custom of a similar kind which has been continuously followed for a period of not less than 200 years, in which most cases We in no wise rescind their above-mentioned prerogative or custom… (If a rite of the Mass had been in use prior to 1370 it was okay to continue to use it. Those rites in use from 1370-1570 were no longer to be used.)

All other of the churches referred to above, however, are hereby denied the use of other missals, which are to be discontinued entirely and absolutely; whereas, by this present Constitution, which will be valid henceforth, now, and forever (there it is again), We order and enjoin that nothing must be added to Our recently published Missal, nothing omitted from it, nor anything whatsoever be changed within it under the penalty of Our displeasure…

Furthermore, by these presents [this law], in virtue of Our Apostolic authority, We grant and concede in perpetuity (and again) that, for the chanting or reading of the Mass in any church whatsoever, this Missal is hereafter to be followed absolutely…We likewise declare and ordain that no one whosoever is forced or coerced to alter this Missal, and that this present document cannot be revoked or modified
…
Therefore, no one whosoever is permitted to alter this notice of Our permission, statute, ordinance, command, precept, grant, indult, declaration, will, decree, and prohibition. Should know that he will incur the wrath of Almighty God and of the Blessed Apostles Peter and Paul.

Given at St. Peter's in the year of the Lord's Incarnation, 1570, on the 14th of July of the Fifth year of Our Pontificate. 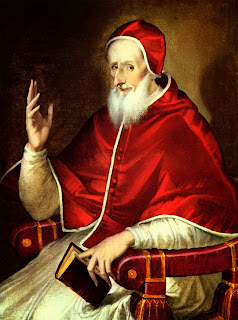 So the question remains. Did Saint Pope Pius, in 1570 with Quo Primum, disallow the kind of changes made to the Mass by Blessed Pope Paul VI in 1969? All those "now and forever's" seem like it, at least on the surface, but only on the surface of it.

In fact Pius V could not have prohibited Paul VI from making changes to the Mass. Why? Because Pius lacked the authority to do so. A pope can, as Pius V did, bind all lesser authorities than himself, but he could not bind an equal authority, such as another pontiff. Pius himself went on to make lesser changes to the missal after he published Quo Primum, as did many other popes, up to Paul VI's much larger changes after the Second Vatican Council. Remember, Quo Primum is dealing with (changeable) Church discipline, not infallible (and thus unchangeable) Church doctrine. No future pope could change the Church's teaching on faith and morals, but all popes have the power to change the Church's disciplines as they see fit. As a Catholic, you are free to think the changes introduced into the Mass after Vatican II were great or terrible ideas and remain a good son of the Church. You cannot, however, fail to recognize the right of the Church to make these changes.
Posted by Nathan Barontini at 10/29/2013 01:25:00 PM