Humility is a virtue. One explicitly extolled by none less than Christ Himself, "Whoever becomes humble like this child is the greatest in the kingdom of heaven."  (Matt 18:4) Thus, we all must strive to live humble lives. Our Holy Father, Francis, was done a great deal to emphasize this truth. As Catholics we know that the "source and summit of the Christian life" (Lumen Gentium 11) is the Holy Eucharist, is the Mass. So, it follow, the Mass, the liturgy, ought to be humble. With that in mind I ask you is this a "humble liturgy?" 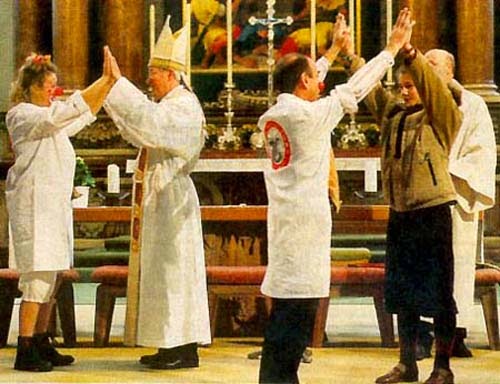 Which leads us to ask, what does a humble liturgy look like? Does it express the local culture? Does it transcend local cultural? Can it dare to be "solemn"?

I know of no better answer to this paradox than one given by CS Lewis. Lewis wasn't speaking directly about the Catholic Mass, rather he was speaking about epic poetry (specifically Milton's Paradise Lost), but his point is relevant to any solemn undertaking. He pointed out these undertakings display

a quality ... which moderns find difficult to understand.... The quality will be understood by anyone who really understands the meaning of ... solemn... A great (M)ass by Mozart or Beethoven is as much a solemnity in its hilarious Gloria as in its poignant crucifixus est. Feasts are... more solemn than fasts... The very fact that pompous is now used only in a bad sense measures the degree to which we have lost the old idea of "solemnity".... In an age when everyone puts on his oldest clothes to be happy in, you must re-awake the simpler state of mind in which people put on gold and scarlet to be happy in. Above all, you must be rid of the hideous idea, fruit of a widespread inferiority complex, that pomp, on the proper occasions, has any connexion with vanity or self-conceit. A celebrant approaching the altar, a princess lead out by a king to dance a minuet, a general officer on a ceremonial parade, a major-domo preceding the boar's head at a Christmas feast - all these wear unusual clothes and move with calculated dignity. This does not mean that they are vain, but that they are obedient.... The modern habit of doing ceremonial things unceremoniously is no proof of humility, rather it proves the offender's inability to forget himself in the rite... We moderns may like dances which are hardly distinguishable from walking.... Our ancestors did not. They liked a dance which was a dance, and fine clothes no one could mistake for working clothes, and feasts that no one could mistake for ordinary dinners (A Preface to Paradise Lost)

And we might add liturgies which could not be mistaken for community gatherings.