Yesterday, we began reading through the encyclical of Pope Leo XIII Supremi Apostolatus Officio, in which Pope Leo encourages the faithful to ardently pray the holy Rosary. Today, let's finish looking at this important document...

5. Since, therefore, it is clearly evident that this form of prayer is particularly pleasing to the Blessed Virgin, and that it is especially suitable as a means of defence for the Church and all Christians, it is in no way wonderful that several others of Our Predecessors have made it their aim to favour and increase its spread by their high recommendations. Thus Urban IV, testified that "every day the Rosary obtained fresh boon for Christianity." Sixtus IV declared that this method of prayer "redounded to the honour of God and the Blessed Virgin, and was well suited to obviate impending dangers;" Leo X that "it was instituted to oppose pernicious heresiarchs and heresies;" while Julius III called it "the glory of the Church." So also St. Pius V., that "with the spread of this devotion the meditations of the faithful have begun to be more inflamed, their prayers more fervent, and they have suddenly become different men; the darkness of heresy has been dissipated, and the light of Catholic faith has broken forth again."…

6. Moved by these thoughts and by the examples of Our Predecessors, We have deemed it most opportune for similar reasons to institute solemn prayers and to endeavour by adopting those addressed to the Blessed Virgin in the recital of the Rosary to obtain from her son Jesus Christ a similar aid against present dangers. You have before your eyes, Venerable Brethren, the trials to which the Church is daily exposed; Christian piety, public morality, nay, even faith itself, the supreme good and beginning of all the other virtues, all are daily menaced with the greatest perils.

7. Nor are you only spectators of the difficulty of the situation, but your charity, like Ours, is keenly wounded; for it is one of the most painful and grievous sights to see so many souls… snatched from salvation by the whirlwind of an age of error, precipitated into the abyss of eternal death. Our need of divine help is as great today as when the great Dominic introduced the use of the Rosary of Mary as a balm for the wounds of his contemporaries.

8. That great saint indeed, divinely enlightened, perceived that no remedy would be more adapted to the evils of his time than that men should return to Christ, who "is the way, the truth, and the life," by frequent meditation on the salvation obtained for Us by Him, and should seek the intercession with God of that Virgin, to whom it is given to destroy all heresies. He therefore so composed the Rosary as to recall the mysteries of our salvation in succession, and the subject of meditation is mingled and, as it were, interlaced with the Angelic salutation and with the prayer addressed to God, the Father of Our Lord Jesus Christ. We, who seek a remedy for similar evils, do not doubt therefore that the prayer introduced by that most blessed man with so much advantage to the Catholic world, will have the greatest effect in removing the calamities of our times also….

11. Encouraged by this hope, We beseech God Himself, with the most earnest desire of Our heart, through her in whom he has placed the fulness of all good, to grant you. Venerable Brethren, every gift of heavenly blessing. As an augury and pledge of which, We lovingly impart to you, to your clergy, and to the people entrusted to your care, the Apostolic Benediction. 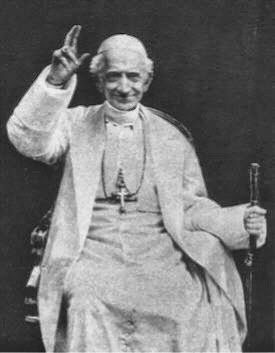