Last time on the blog, we looked at some responses to a common objection to the dogma of the Immaculate Conception. Today, I wanted to take a look at the Apostolic Constitution Ineffabilis Deus, with which Blessed Pope Pius IX formally defined this dogma, using the ex cathedra power of the Roman Pontiff to infallibly define a teaching of the faith. (emphasis and comments mine).

God Ineffable -- whose ways are mercy and truth, whose will is omnipotence itself, and whose wisdom "reaches from end to end mightily, and orders all things sweetly" -- having foreseen from all eternity the lamentable wretchedness of the entire human race which would result from the sin of Adam, decreed, by a plan hidden from the centuries, to complete the first work of his goodness by a mystery yet more wondrously sublime through the Incarnation of the Word (The Immaculate Conception is all about Christ, as Pius makes clear in the very first sentence). This he decreed in order that man who, contrary to the plan of Divine Mercy had been led into sin by the cunning malice of Satan, should not perish; and in order that what had been lost in the first Adam would be gloriously restored in the Second Adam. From the very beginning, and before time began, the eternal Father chose and prepared for his only-begotten Son a Mother in whom the Son of God would become incarnate and from whom, in the blessed fullness of time, he would be born into this world. Above all creatures did God so loved her that truly in her was the Father well pleased with singular delight. Therefore, far above all the angels and all the saints so wondrously did God endow her with the abundance of all heavenly gifts poured from the treasury of his divinity that this mother, ever absolutely free of all stain of sin, all fair and perfect, would possess that fullness of holy innocence and sanctity than which, under God, one cannot even imagine anything greater, and which, outside of God, no mind can succeed in comprehending fully.

Supreme Reason for the Privilege: The Divine Maternity
And indeed it was wholly fitting that so wonderful a mother should be ever resplendent with the glory of most sublime holiness and so completely free from all taint of original sin that she would triumph utterly over the ancient serpent (see Genesis 3:15).... It was she whom the Son himself chose to make his Mother...

Liturgical Argument
The Catholic Church, directed by the Holy Spirit of God, is the pillar and base of truth and has ever held as divinely revealed and as contained in the deposit of heavenly revelation this doctrine concerning the original innocence of the august Virgin (Pius isn't inventing the doctrine, he is simply formally defining what the Church has "ever held")-- a doctrine which is so perfectly in harmony with her wonderful sanctity and preeminent dignity as Mother of God -- and thus has never ceased to explain, to teach and to foster this doctrine age after age in many ways and by solemn acts. (This) was made very clear by the Church when she did not hesitate to present for the public devotion and veneration of the faithful the Feast of the Conception of the Blessed Virgin. By this most significant fact, the Church made it clear indeed that the conception of Mary is to be venerated as something extraordinary, wonderful, eminently holy, and different from the conception of all other human beings -- for the Church celebrates only the feast days of the saints....


Ordinary Teaching of the Roman Church
These truths, so generally accepted and put into practice by the faithful, indicate how zealously the Roman Church, mother and teacher of all Churches, has continued to teach this doctrine of the Immaculate Conception of the Virgin. Yet the more important actions of the Church deserve to be mentioned in detail. For such dignity and authority belong to the Church that she alone is the center of truth and of Catholic unity. It is the Church in which alone religion has been inviolably preserved and from which all other Churches must receive the tradition of the Faith....

The Roman Doctrine
...our predecessors, the Roman Pontiffs... while directing all their efforts toward an increase of the devotion to the conception, made it their aim not only to emphasize the object with the utmost zeal, but also to enunciate the exact doctrine. Definitely and clearly they taught that the feast was held in honor of the conception of the Virgin.... Hence the words of one of our predecessors, Alexander VII (pope from 1655-1667), who authoritatively and decisively declared the mind of the Church: "Concerning the most Blessed Virgin Mary, Mother of God, ancient indeed is that devotion of the faithful based on the belief that her soul, in the first instant of its creation and in the first instant of the soul's infusion into the body, was, by a special grace and privilege of God, in view of the merits of Jesus Christ, her Son and the Redeemer of the human race, preserved free from all stain of original sin. And in this sense have the faithful ever solemnized and celebrated the Feast of the Conception."

Moreover, our predecessors considered it their special solemn duty with all diligence, zeal, and effort to preserve intact the doctrine of the Immaculate Conception of the Mother of God. For, not only have they in no way ever allowed this doctrine to be censured or changed...Not content with this they most strictly prohibited any opinion contrary to this doctrine to be defended in public or private in order that the doctrine of the Immaculate Conception of the Virgin might remain inviolate. By repeated blows they wished to put an end to such an opinion. And lest these oft-repeated and clearest statements seem useless, they added a sanction to them.

The Council of Trent
Besides, we must note a fact of the greatest importance indeed. Even the Council of Trent itself, when it promulgated the dogmatic decree concerning original sin, following the testimonies of the Sacred Scriptures, of the Holy Fathers and of the renowned Council, decreed and defined that all men are born infected by original sin; nevertheless, it solemnly declared that it had no intention of including the blessed and immaculate Virgin Mary, the Mother of God, in this decree and in the general extension of its definition...

Testimonies of Tradition
And indeed, illustrious documents of venerable antiquity, of both the Eastern and the Western Church, very forcibly testify that this doctrine of the Immaculate Conception of the most Blessed Virgin, which was daily more and more splendidly explained, stated and confirmed by the highest authority, teaching, zeal, knowledge, and wisdom of the Church, and which was disseminated among all peoples and nations of the Catholic world in a marvelous manner -- this doctrine always existed in the Church as a doctrine that has been received from our ancestors, and that has been stamped with the character of revealed doctrine. For the Church of Christ, watchful guardian that she is, and defender of the dogmas deposited with her, never changes anything, never diminishes anything, never adds anything to them; but with all diligence she treats the ancient documents faithfully and wisely...

Interpreters of the Sacred Scripture
The Fathers and writers of the Church... had nothing more at heart than to vie with one another in preaching and teaching in many wonderful ways the Virgin's supreme sanctity, dignity, and immunity from all stain of sin....These ecclesiastical writers in quoting the words by which at the beginning of the world God announced his merciful remedies prepared for the regeneration of mankind -- words by which he crushed the audacity of the deceitful serpent and wondrously raised up the hope of our race, saying, "I will put enmities between you and the woman, between your seed and her seed" -- taught that by this divine prophecy the merciful Redeemer of mankind, Jesus Christ, the only begotten Son of God, was clearly foretold: That his most Blessed Mother, the Virgin Mary, was prophetically indicated; and, at the same time, the very enmity of both against the evil one was significantly expressed. Hence, just as Christ, the Mediator between God and man, assumed human nature, blotted the handwriting of the decree that stood against us, and fastened it triumphantly to the cross, so the most holy Virgin, united with him by a most intimate and indissoluble bond, was, with him and through him, eternally at enmity with the evil serpent, and most completely triumphed over him, and thus crushed his head with her immaculate foot.

This sublime and singular privilege of the Blessed Virgin, together with her most excellent innocence, purity, holiness and freedom from every stain of sin, as well as the unspeakable abundance and greatness of all heavenly graces, virtues and privileges -- these the Fathers beheld in that ark of Noah, which was built by divine command and escaped entirely safe and sound from the common shipwreck of the whole world; in the ladder which Jacob saw reaching from the earth to heaven, by whose rungs the angels of God ascended and descended, and on whose top the Lord himself leaned' in that bush which Moses saw in the holy place burning on all sides, which was not consumed or injured in any way but grew green and blossomed beautifully; in that impregnable tower before the enemy, from which hung a thousand bucklers and all the armor of the strong; in that garden enclosed on all sides, which cannot be violated or corrupted by any deceitful plots; as in that resplendent city of God, which has its foundations on the holy mountains; in that most august temple of God, which, radiant with divine splendors, is full of the glory of God; and in very many other biblical types of this kind. In such allusions the Fathers taught that the exalted dignity of the Mother of God, her spotless innocence and her sanctity unstained by any fault, had been prophesied in a wonderful manner.... 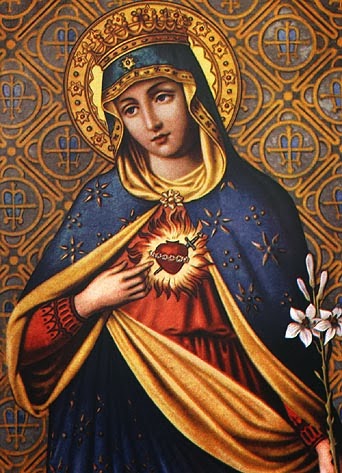