Over at the Catholic Answers Forums a poster asked a pointed question on a thread about the latest dust up over comments of our Holy Father. He asked why so many Catholics have to spend so much time explaining and defending what Francis says and he contrasted this with how this wasn't necessary with either Benedict XVI or John Paul II.


I think there are a few reasons. 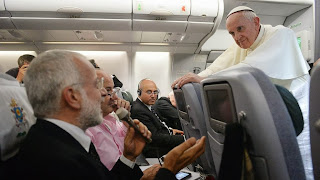 1) Not all people are equally clear when they speak. Francis seems to be, so far, less clear than his immediate predecessors.

2) JP2 and B16 both are European, Francis is South American. This means that Francis' experiences are quite different from his predecessors which naturally leads to a different way of expressing himself. Many of us in America are unfamiliar with those experiences and with having a third world pontiff, which has lead to some miscommunications.

5) Hermeneutics. The media saw JP2 and B16 as the orthodox Catholics they were and saw their statements through that lens. The media has decided that Francis is a "liberal" (by which they mean heterodox) Catholic and interpret his statements as harbingers of the massive changes they hope to see. This skews how they interpret Francis, which, in turn, distorts the message most people are getting about Francis, which leads to misunderstandings. The media even misinterpreted B16's statements on condoms and they had a much better read on him, of course they will misinterpret Francis even more so.

6) He's new on the scene. Unlike B16 and JP2 who were established figures before they were elected to the Chair of St. Peter and who wrote quite a bit, Francis is (for most Catholics) still an unknown figure. There isn't a lot of his pre-papal writings widely available in English and most Catholics are either still adjusting to the new pope or have bought into the media storyline that he is the anti-Benedict (which is ridiculous). Francis is also still adjusting to the papacy and will with time make himself clearer and clearer.

We know Francis is a "son of the Church," we know he is personally orthodox, and we know the Holy Spirit will not allow any Pope to formally teach error. The best thing we Catholics can do when we read something inflammatory that Francis supposedly said or is going to do, we need to take a deep breath, read the original source in context, try to understand what Francis is telling us in continuity with what popes have been saying since Peter, and trust in the Church.
Posted by Nathan Barontini at 1/06/2014 09:25:00 AM