The Catholic Church Defends the Rights of Children and Authentic Freedom

In a recent interview, one of my favorite Cardinals had some profound words to remind the world of the importance of the family (and yes, I am solely referring to the "traditional" family - how absurd that such qualifiers must be used). As you may know Mueller is the head of the Congregation for the Doctrine of the Faith (what used to be simply called the "Holy Office") and thus is a Vatican heavy weight (Pope Benedict, before ascending to Peter's Throne, was head of the CDF). These are important words, even if the content should be incredibly obvious to all. 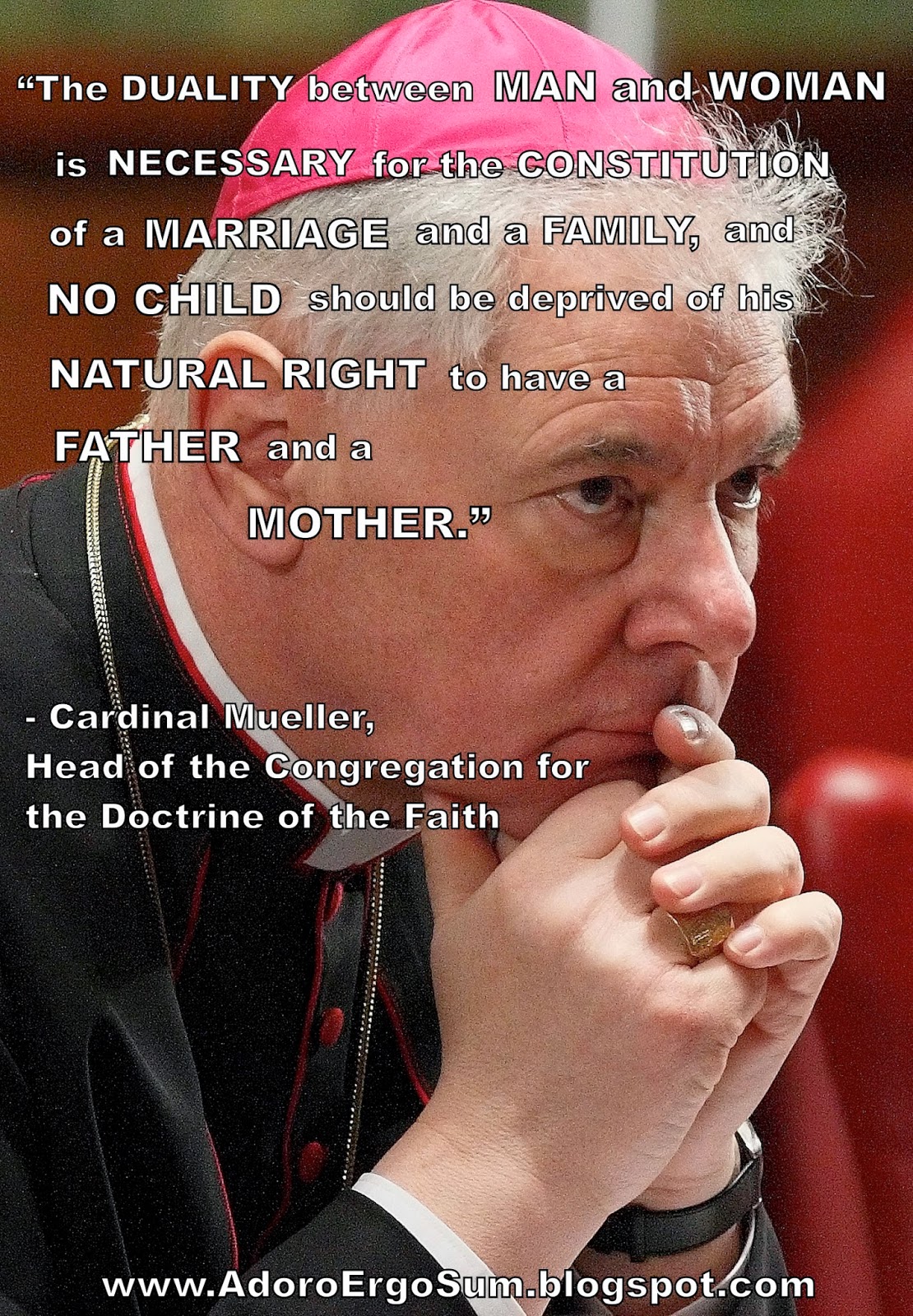 What Mueller, and indeed the Church, is reminding the world of is simple: a child has the right to be born in an act of love between his mother and father. He further has a right to be raised, again in love, by the same father and mother. To deliberately deprive a child of these basic things is to grievously violate his fundamental human rights.

Let me say that again, the child has the right. No adult has the right to a child. And doing things that violate the basic rights of the child (think: IVF, gay adoption, surrogate motherhood, etc) is always and everywhere intrinsically evil. Yes, evil.

Do we sometimes find a child in a less than ideal situation (say he is unwanted by his parents who put him up for adoption or he is abandoned by a "dead beat dad"), sadly yes. This is after all a "lacrimarum valle." In such unfortunate, less than ideal, situations we make the best of it. A great pair of adoptive parents (yes, this means an adoptive father and mother who are married) is found who will do what the original parents refused to in the first instance or a single mother (again, an unfortunate, less than ideal, situation) takes up the responsibility that should be shared with the father by herself and does the best she can. These people (adoptive parents, single parents, etc) are to be commended highly for the work they do. However, that some people step up in heroic fashion to make the best out of a less than ideal situation is no reason to pretend such situations are unfortunate.

Without any redemptive value, unlike the situations looked at just now, are those where a child is deliberately deprived of the love of a father and mother. It is one thing for a mom to, again heroically,  shoulder the task of raising a child who was abandoned by his father alone. It is another for a woman to decide to get pregnant outside of marriage with the intention of raising a child alone. Such is to deprive her child of his father with foresight. Again, it is one thing for a child who is unwanted to be raised heroically by a loving set of adoptive parents. It is another for a child to placed in a home without a father or mother (as all homosexual homes, by definition, must be).

The world, of course, has this all exactly backwards. The world treats the child as a commodity to be bought and sold, in what amounts to little more than modern chattel slavery (albeit one that ends with birth). Or, even worse, as a product to be manufactured. Here the child has no rights, not to be created in an act of love, not to have a father and a mother, not even to life itself. The world declares, in effect, that might makes right; that the strong may do as they like to the weak, simply because they can. Such is the attitude that fueled the slave trade, the Holocaust, and countless other horrors brought on the world when they embrace such an evil ideology.

In the end, it is the Catholic Church who raises the cry of real human rights - as it always has been and always will be.

The Church is the defender of authentic freedom.