Pope Benedict Warns That Relativism is "Lethal to Faith."

Is anyone else as glad as I am to hear from this guy again? Te Deum laudamus! (emphasis and comments are mine) 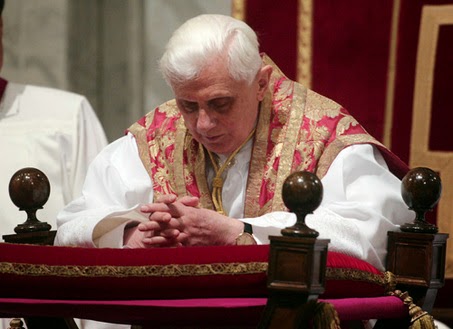 Benedict XVI has said that dialogue with other religions is no substitute for spreading the Gospel to non-Christian cultures, and warned against relativistic ideas of religious truth as “lethal to faith.”
...

“The risen Lord instructed his apostles, and through them his disciples in all ages, to take his word to the ends of the earth and to make disciples of all people,” Benedict XVI wrote.

“‘But does that still apply?’ many inside and outside the Church ask themselves today. ‘Is mission still something for today? Would it not be more appropriate to meet in dialogue among religions and serve together the cause of world peace? (IOW, is mission about saving souls or building worldly peace)’ The counter-question is: ‘Can dialogue substitute for mission?’”

...“In fact, many today... (take) for granted that different religions are variants of one and the same reality. The question of truth, that which originally motivated Christians more than any other, is here put inside parentheses. It is assumed that the authentic truth about God is in the last analysis unreachable and that at best one can represent the ineffable with a variety of symbols (as we discussed HERE). This renunciation of truth seems realistic and useful for peace among religions in the world.

“It is nevertheless lethal to faith. In fact, faith loses its binding character and its seriousness, everything is reduced to interchangeable symbols, capable of referring only distantly to the inaccessible mystery of the divine.”
...

“We proclaim Jesus Christ not to procure as many members as possible for our community, and still less in order to gain power. We speak of him because we feel the duty to transmit that joy which has been given to us.

(read the whole thing at the Catholic Herald).

Which elaborates upon what Pope Francis has also been teaching us,


The temptation today is to reduce Christianity to merely human wisdom, a pseudo-science of well-being. In our heavily secularized world a "gradual secularization of salvation" has taken place, so that people strive for the good of man, but man who is truncated, reduced to his merely horizontal dimension. We know, however, that Jesus came to bring integral salvation, one which embraces the whole person and all mankind, and opens up the wondrous prospect of divine filiation. Why mission? Because to us, as to St. Paul, "this grace was given, to preach to the Gentiles the unsearchable riches of Christ" (Eph 3:8). Newness of life in him is the "Good News" for men and women of every age: all are called to it and destined for it.  (Redemtoris missio, 11)

Let's all join together and thank the Lord for the great popes we have been blessed with, and especially thank him for the clarity and courage with which Pope Benedict XVI still speaks with. Te Deum laudamus!