As he descends from the abode of the violent on the back of the horrific Geryon, Dante gets a "demon-eyed" view of the next Circle, the Eighth, the Circle where fraud is punished. Earlier, when Dante and Virgil had rested by Anastasius' tomb to allow themselves to adjust to the horrible odor coming from lower Hell (the source of which we will soon discover), Virgil had explained why fraud, as an evil only persons can commit, is worse even than violence or heresy (the other sins punished inside the fortress city of Dis). It is precisely these sinners who will fill the Eighth and Ninth Circles of Hell, these sinners who we will begin to meet once Geryon lands.

Before our demon-turned-airplane touches down, however, Dante is able to get a stunning view of the unique structure of the Eighth Circle. This is the famed "malebolge" ("evil pockets"), divided into ten "bolge" (each a smaller, concentric circle within the Eighth Circle, making malebolge a microcosm of Hell itself). The bolge are pits over which stone bridges arch, allowing Dante and Vigil to move from one bolge to the next. Dante describes the scene,


There is a place in Hell called Malebolge,
Wholly of stone and of an iron color,
As is the circle that around it turns....

The first "pocket" Dante and Virgil come upon is filled with two different groups of sinners, each walking a different direction within the bolgia and each whipped forward, without pause or mercy, by powerful demons. Waking toward our pilgrims, their faces visible as the other groups are not, are the pimps, men who most literally "used women" for their political, social, and above all economic gain. Among this group, none too anxious to be seen by Dante, unlike the souls in the higher circles of Hell, is Venedico Caccianemico, a prominent Bologna politician said to have curried favor with the Marquis of Este by pimping out his own sister. Bologna was known in the early fourteenth century for this sin so much that Venedico tells Dante that more Bolognesi reside in the first bolgia than currently live in the entire territory controlled by Bologna! Venedico's tale is concluded by a demon's whip.
Before crossing the bridge over the first bolgia, Virgil asks Dante to turn around so as to see the faces of the other group of sinners punished here, the seducers. They too have defrauded women, not by selling them to other men, but by luring them into their own bedchambers. Here Dante sees another proud soul, one who attempts to keep his absurd royal bearing despite being driven, naked, through the pits of Hell - Jason (from the Argos).

After seeing the punishment met out to those who betrayed the women in their lives, and now themselves are forced, very much against their wills, to do something they might rather not, Dante and Virgil cross the bridge and discover the cause of the foul smell they've been dealing with since they entered the Sixth Circle. It is here, in the second bolgia, that the flatterers are punished by finding themselves immersed in that which they dealt best in above,

There we were, and from where I stood I saw
souls in the ditch plunged into excrement
that might well have been flushed from our latrines (XVII:112-114, Musa)

Here the souls, including a notable political ally of Dante's White Guelf party, Alessio Interminei, are forever in torment,

... snorting with their muzzles,
And with their palms beating upon themselves. (XVIII:104-105)

The very words Dante uses to describe Alessio's appearance echo with the sounds of slapping and smacking, (listen to the stop in the double c's bolded below): 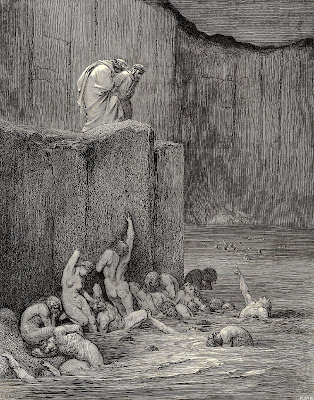 After watching the suffering of Thaïs, Vrigil, disgusted with the scene below, tells Dante,