Blogging through Hell (pt 10) - Those who Defraud the Church

Leaving behind the putrid smell of the second bolgia, Dante, the poet, makes the following interjection in the narrative of his Commedia,


O Simon Magnus, O forlon disciples,
Ye who the things of God, which ought to be
The brides of holiness, rapaciously

For silver and for gold do prostitute,
Now it behoves for you the trumpet sound,
Because in this third Bolgia ye abide. (XIX:1-6)

Simon Magnus, of course, appears in the Acts of the Apostles,


But there was a man named Simon who had previously practiced magic in the city and amazed the nation of Samaria, saying that he himself was somebody great. They all gave heed to him, from the least to the greatest... But when they believed Philip as he preached good news about the kingdom of God and the name of Jesus Christ, they were baptized... Even Simon himself believed, and after being baptized he continued with Philip. And seeing signs and great miracles performed, he was amazed.
Now when the apostles at Jerusalem heard that Samaria had received the word of God, they sent to them Peter and John, who came down and prayed for them that they might receive the Holy Spirit... Now when Simon saw that the Spirit was given through the laying on of the apostles’ hands, he offered them money, saying, “Give me also this power, that any one on whom I lay my hands may receive the Holy Spirit.”  But Peter said to him, “Your silver perish with you, because you thought you could obtain the gift of God with money!..” (8:9-20, RSV, emphasis added)

From this early encounter through Dante's day and beyond the temptation for men to try to purchase spiritual things, known as simony, after Simon, plagued the Church. As did the equally pernicious temptation for Church men, including popes, to sell Church offices (i.e. to "prostitute," "for silver and for gold," "the things of God, which ought to be the brides of holiness.") It is these sinners, obviously related to those in the first bolgia, who prostituted women, oftentimes their close relatives, that we encounter here.

Among these simoniacs, Dante meets Giovanni Gaetano degli Orsini, Pope Nicholas III, who, like all the sinners punished here, is plunged, upside down, into a hole, his feet protruding upwards with a flame eternally licking them. This image, a pope turned upside down with his feet aflame, is a perfect contrapasso, as it inverts the original "birthday of the Church," Pentecost, where the Holy Spirit descends upon the heads of the original pope and bishops of the Church - none of whom purchased their offices from Christ - as tongues of fire. 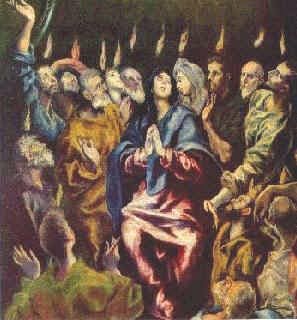 Pope Nicholas goes on to reveal to Dante that both Boniface VIII and Clement V, the next two popes, will be joining him in this bolgia, each successive pope stuffing the former one farther into the hole. Dante, disguised with the evil of simony, has no pity on Nicholas,


I do not know if I were here too bold,
That him I answered only in this meter:
"I pray thee tell me now how great a treasure

Our Lord demanded of Saint Peter first,
Before he put the keys into his keeping?
Truly he nothing asked but 'Follow me.'

Nor Peter nor the rest asked of Matthias
Silver or gold, when he by lot was chosen
Unto the place the guilt soul had lost. (XIX:88-96)

But Dante, despite acknowledging in the most graphic manner, that even popes can be evil sinners, yet retains his respect for the office which Nicholas, Boniface, and Clement betrayed,


And were it not for the reverence I have
for those highest of all keys that you once held
in the happy life - if this did not restrain me,

After bewailing the greed of pastors like Nicholas, including accusing them of worshipping not one, but hundreds of gods made of gold and silver, Dante and Virgil leave behind the suffering pontiff, climb back onto the bridge and head for the next bolgia.
Posted by Nathan Barontini at 5/12/2015 08:21:00 AM