Society is a Marriage Construct 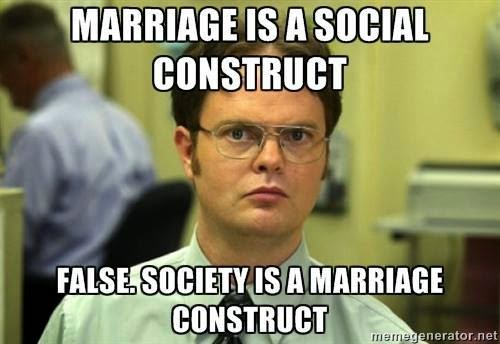 Saw this over at Catholic Memes and thought it perfect. As we look through history, we see societies growing out of families - families built on marriage. In many respects, society exists to promote and protect the family.

Unfortunately, influenced by the "social contract" thinking of men like Hobbes, Locke, and Rousseau,  our society fails to recognize this basic truth. Hobbes, in his seminal (if deeply flawed work) Leviathan ascribes the rise of government to the horrors of the extreme individualism that must have existed before the rise of governments,


...it is manifest, that during the time men live without a common Power to keep them all in awe, they are in that condition which is called Warre; and such warre, as is of every man against every man.... the life of man (was) solitary, poor, nasty, brutish, and short. (XIII)

It is against this bleak backdrop that Hobbes posits the rise of government. Of course, such a individualistic hell never actually existed on Earth, as even Hobbes admits,


It may peradventure be thought, there was never such a time, nor condition of warre as this; and I believe it was never generally so, over all the world (ibid)

Hobbes then goes on to point to the Native peoples of America as an example of people living a "solitary, poor, nasty, brutish" life. Whether or not the natives (or historians today) would agree with this assessment is another matter (they don't). However, Hobbes admits that even the savage (to him) people in America had "the government of small Families" (ibid). And it is here, in the heart of the greatest work of the forefather of modern political theory, and one of the biggest proponents of the all powerful State, that we see the same admission that our meme makes - society doesn't create families, families create societies.

The same tacit admission is at the heart of another father of our modern political worldview - Niccolo Machiavelli, who, using the founding of Venice as an example, wrote


Venice... owed its origin to the fact that several tribes (tribes being extended family units) had taken refuge on the little islands situated at the head of the Adriatic Sea, to escape from war... Those refugees themselves, and without any prince (i.e. State) to govern them, began to live under such laws as seemed to them best... (The Discourses, Chapter 1)

What we see in a remarkably clear fashion in the case of Venice, holds true for the founding of all cities. They were, according to Machiavelli, first formed for "greater conveniences and greater facility of defense." (ibid)

Not to be left out is the most influential "social contract" political thinker, John Locke. Locke's arguments, especially in his Second Treatise of Government, were especially influential with America's "Founding Fathers." Locke, like Hobbes and Machiavelli, saw the State as something people joined voluntarily to limit the disadvantages of living a solitary, brutish, life. Even Locke, however, saw through the nonsense that societies create marriages (and families),


The first society was between man and wife, which gave beginning to that between parents and children... (Second Treatise of Government, chapter 7).

It is from this "first society" that larger societies and governments grow - and it is to protect this first society (marriage for the sake of procreation) that governments can be justified.

Thus we see even the forefathers of our political theories would agree on the absurdity of suggesting that marriage is merely a "social construct," one which societies (having created) may change to suit the whims of the times. Rather, societies are created by families, which in turn are best served by healthy marriages. With such a realization, we might ask, is our society still helping to protect and serve the family? If not, maybe we ought to focus less on allowing society to change the family and more on transforming society. After all, society is but a "marriage construct."