Should "the Sign of Peace" be Moved to the End of Mass?

Yesterday, Crisis Magazine published a thought provoking article on the current placement of the "Sign of Peace" in the forma ordinaria of the Holy Sacrifice of the Mass. As our liturgical worship determines our beliefs (lex orandi, lex credendi), I thought it would be worth drawing attention of my readers to this important question once again.

In the Crisis piece, Gerald T. Mundy lays out why exactly the current placement is more than a bit problematic (enough so that Pope Benedict called on the Congregation for Divine Worship to look into moving or eliminating the Sign of Peace)


Rather than reminding the faithful that they are sharing in a solemn sacrifice and preparing to participate communally in worship (lex orandi), and in the Supper of the Lord, receiving His very body and blood as did the apostles on the night that they were told He was to become the Passover Paschal Lamb, the gesture of peace in its current place obliterates the reverence of the moment.

And, worse yet, it blurs the real distinction between what happens in a Catholic Mass and at a Protestant Sunday gathering,


the gesture of peace in its current place maims the Catholic teaching of the sacrificial purpose of the Mass. Evangelical Protestants and so-called charismatic Catholics similarly view worship as celebratory fun full of pomp, whistles, vocal affirmation, clapping, and music that mirrors that which is played at dance parties. The Catholic Mass, however, is not a celebration, nor it is a weekend party filled with bread, wine, and good company. Catholics gather to venerate the Eucharistic sacrifice upon the altar.

And, if you haven't been sold on the why the sign of peace ought to be moved yet, Mundy ends his piece thus,


For at the Last Supper, when Jesus told his followers most dear that he was to die the next day, his apostles upon hearing this did not smile, hug, shake hands and break into song at the prospect of their divine rabbi’s forthcoming bloody and inhumane sacrifice. Remember, the Lord’s hands with which he raised the bread and chalice in the Upper Room would be nailed heinously to a cross, his digestive tract pierced with a spear to ensure bodily death. He looked up to heaven that evening and asked that they eat and drink in his memory. One would think that such a Lord would deserve rightful due, and that the gestures would be saved for either the conclusion of, or following, the Holy Sacrifice of the Mass. (read the whole thing there it is worth your time)

The vision of acting as most Catholics do during the sign of peace at the foot of the Cross or in the Upper Room ought to be enough to convince all but the most determined liturgical deconstructionist of the need for once more rethinking the placement of this gesture. 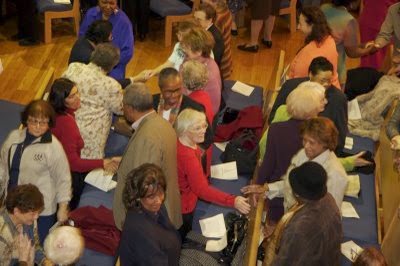 Where ought it be moved to? Mundy suggests the end of the Mass would be better time, perhaps right before or immediately after the Ite, missa est. Such a placement would eliminate the distractions currently caused, but would run afoul of the liturgical theology that suggests the sign of peace fulfills Jesus' commandment in Matthew 5,

which will surely be one of the counter arguments against moving the sign of peace to the end of the Mass. Perhaps, then, a better placement for the sign would be at the beginning of the Mass, maybe immediately following the Confiteor (which might then be brought back to each and every Mass). It is at this moment that our attention is turned toward our fellow worshippers both in Heaven and on Earth. It is then that we seek to be "reconciled to (our) brother" so as to worship with a clean conscious. Perhaps, then would be a good time to symbolically offer the forgiveness to our neighbors that they have just asked us for by offering them a sign of peace.

Either way the current placement of the sign of peace does seem to be a distraction from the principal action of the Mass, the re-presentation of Christ's once for all sacrifice on Calvary. Of course, as the Fathers of the Second Vatican Council declared,


Regulation of the sacred liturgy depends solely on the authority of the Church... no other person even if he be a priest may add, remove, or change anything in the liturgy on his own authority. (Sacrosanctum Concilium, 22)

So we'll just have to wait for the Congregation to take another look at the matter.