Great news out of Rome! Our beloved Pope Emeritus, Benedict XVI, is doing very well and continues to be in good health, according to a report from CNA/EWTN. 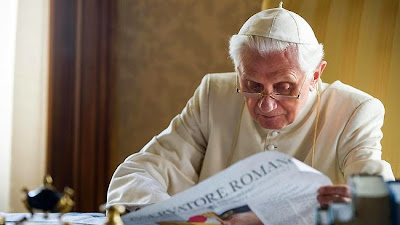 Monsignor Anthony Figueiredo recently met with Benedict, swapped zucchetti with him, and found him to be in excellent physical and mental shape (oh how I hope he is writing!) From CNA:

Heavy is the head that wears the papal tiara (well, mitre these days). Benedict's self-imposed retirement seems to be agreeing with him. The good Monsignor (who is one of the leaders of the Caritas in Veritate Institute, which takes its inspiration - and name - from one of Benedict's encyclicals) went on to give a great description of Benedict's time as pope,

“He was able to combine sound doctrine, without changing (it), with a very pastoral approach,” he said, explaining that as pastors, priests must be able to reach people in the pews not by changing doctrine, but rather making it something living and meaningful in people’s lives.


And pointed out that Benedict's greatest witness for the Church today (and in times future) was the profound humility and trust in God he had to step down from the Chair of Peter,


“The greatest pulpit from which Benedict has ever preached is his great witness of humility. Here is a man who reached the top, we would say, in the Church. He is the successor of Peter, but he did not cling to that dignity”

The whole piece is worth reading (HERE). It is always heartening to hear the Holy Father Emeritus is doing well. As anyone who has been around the Church for awhile knows, Cardinal Ratzinger had wanted to retire several times during the pontificate of St. Pope John Paul II. Following the will of God, he instead served not only for the duration of JP 2's tenure, but then heroically answered the call to become the Supreme Pontiff himself, leading the Church in such a way as to physically manifest the "hermeneutic of continuity" which is the only valid way of understanding the Second Vatican Council. After reaching this height (the highest office attainable for any man - servus servorum Dei), Benedict was willing to, for the good of the Church, step aside when he felt no longer able to fulfill the functions of his office. That one act, his "greatest pulpit", will certainly echo through the history of the Church with greater force even than his many brilliant writings. Truly, Joseph Ratzinger has long been and continues to be a loyal servant of Jesus Christ and of His Most Holy Catholic Church.

If you haven't had a chance to watch his only extended English language interview (conducted by Raymond Arroyo at The World Over) you ought to give it a watch. This is from shortly before he would become pope.