Our society values few things, if anything, more than Equality. Indeed, we might very well be the most egalitarian society to have ever existed. One of the founding principals of the United States is equality. "We hold these truths to be self evident, that all men are created equal..." Interestingly, although our country has long valued equality, the kind of equality valued has shifted over time.

Equality of Worth
Originally, when Jefferson penned those famous words, what was self-evidently held was that all were created equal. The founders knew that some men were stronger, faster, smarter, better connected, wealthier, etc. than others, but they also knew that all men were created equal, that all men, despite all the various skills and abilities they might or might not individually possess, were equal in their human nature. This basic equality lead the founding fathers to reject the idea of the justice of a classed nobility with inherent rights over and against the common "peasant" class. Men were not equal in all ways, according to Jefferson et al, but they did have a basic common dignity, a human dignity, which demanded an equal treatment before the law. Jefferson himself sums this early American position up perfectly in a letter he wrote to Roger Weightman:


the general spread of the light of science has already laid open to every view the palpable truth, that the mass of mankind has not been born with saddles on their backs, nor a favored few booted and spurred, ready to ride them legitimately, by the grace of God. 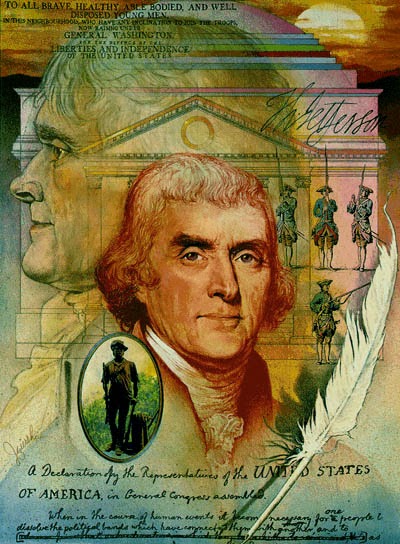 Equality of Opportunity
As time wore on, this very limited concept of equality began to develop into the idea that all men, because of their common humanity, should have an equal opportunity to succeed. Here we see cries against nepotism and favoritism among the upper American class. Men like Andrew Carnegie and the fictional tales of Horatio Alger symbolized the ability of men, here in America, to climb to the highest ranks of society from the lowest depths of poverty. The American ideal passed from the elimination of a legally established noble class to a society were all men could attain great wealth, high social standing, and the most powerful offices in the land.

Equality of Result
Over the last half century, we've seen another development of the idea of equality. Now, many people demand not a basic equality of human dignity, not a legal equality that holds all men to the same standard before the law, not even an equality that allows for every person to have the opportunity of becoming a success story, but calls for equal results for all. This is the mentality that demands trophies for all children, even those on the worst teams. This is the mentality that demands so many awards be given out that each kid may go home with a blue ribbon. This is the mentality of the "Occupy Wall Street" crowd, that wants the government to redistribute the wealth to make sure everyone has "an equal share."

While all of this is interesting enough in its own right, tomorrow I'd like to look at how the underlying principal of equality, especially equality of result, has lead to a dangerous distortion of the Biblical worldview, a distortion that makes some clear and simple Biblical doctrines, doctrines taught always and everywhere by the Magisterium of the Church, hard for modern Americans to accept or even to understand.