Of the Eucharist, Pope Urban IV, Cardinal Newman, and Protestantism

I recently came across this description of the "source and summit of the Christian life" (Lumen Gentium 11, CCC 1324) from 1264 and wanted to share it here with you,

About to pass from this world to the Father, our Saviour the Lord Jesus Christ, since the time of his Passion was at hand, instituted the great and wonderful Sacrament of his Body and Blood, bestowing his Body as food and his Blood as drink. For, as often as we eat this bread and drink this cup, we announce the death of the Lord. Indeed, at the institution of this Sacrament, he himself said to the Apostles: Do this
in memory of me: so that for us the special and outstanding memorial of his love would be this venerable Sacrament: a memorial in which we attain the corporeal Presence of the Savior himself.
Other things which we remember we embrace spiritually and mentally: we do not thereby obtain their real presence. However, in this sacramental commemoration, Jesus Christ is present with us in his proper substance, although under another form. As he was about to ascend into heaven, he said to the Apostles and their helpers, I will be with you all days even unto the consummation of the world. He comforted them with a gracious promise that he would remain and would be with them even by his corporeal presence. Therefore he gave himself as nourishment, so that, since man fell by means of the food of the death-giving tree: man is raised up by means of the food of the life-giving tree. Eating wounded us, and eating healed us. Thus the Saviour says, My Flesh is real food. This bread is taken but truly not consumed, because it is not transformed into the eater. Rather, if it is worthily received, the recipient is conformed to it. (Pope Urban IV, Transiturus)

This is the eternal faith of the Church, and indeed of all Christianity. Pope Urban isn't saying anything the Fathers of the Church (i.e. the first Christians wouldn't have immediately assented to).


...there is in me no fire of material love, but rather a living water, speaking in me and saying within me, "Come to the Father". I take no pleasure in corruptible food or in the delights of this life. I want the Bread of God, which is the Flesh of Jesus Christ, who is the seed of David; and as I drink I want his Blood, which is incorruptible love. (St. Ignatius of Antioch, Letter to the Romans, circa AD 100)

Or what Christ Himself said only a few decades earlier,


Jesus said unto them, Verily, verily, I say unto you, Except ye eat the flesh of the Son of man, and drink his blood, ye have no life in you.Whoso eateth my flesh, and drinketh my blood, hath eternal life; and I will raise him up at the last day.For my flesh is meat indeed, and my blood is drink indeed.He that eateth my flesh, and drinketh my blood, dwelleth in me, and I in him. (John 6:53-56)

Or what the Church teaches today,


The mode of Christ's presence under the Eucharistic species is unique. It raises the Eucharist above all the sacraments as "the perfection of the spiritual life and the end to which all the sacraments tend." (St. Thomas Aquinas, STh III 73, 3c)  In the most blessed sacrament of the Eucharist "the body and blood, together with the soul and divinity, of our Lord Jesus Christ and, therefore, the whole Christ is truly, really, and substantially contained." (Council of Trent, DS 1651) "This presence is called 'real' - by which is not intended to exclude the other types of presence as id they could not be 'real' too, but because it is presence in the fullest sense: that is to say, it is a substantial presence by which Christ, God and man, makes himself wholly and entirely present." (Paul VI, MF, 39).

Which is the beauty of Catholicism. It is the same yesterday, today and forever - which reminds me of someone.... oh yeah Him (cf. Heb 13:8). In Catholicism there is no rupture, no "great apostasy," no sense that all Christians for centuries were wrong and we suddenly right. No. It is Christianity unmixed by the zeitgeist of the age, uncontaminated by the philosophical presuppositions of modernity. In other words, it doesn't require us to think like this, 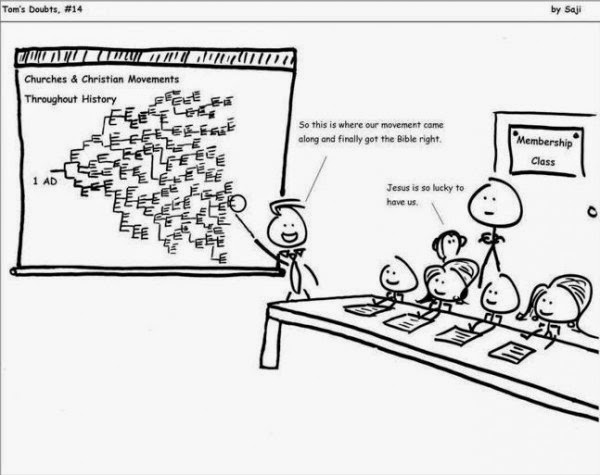 Or in the capable words of Blessed John Henry Cardinal Newman (in his account of his conversion from Anglicanism to Catholicism), 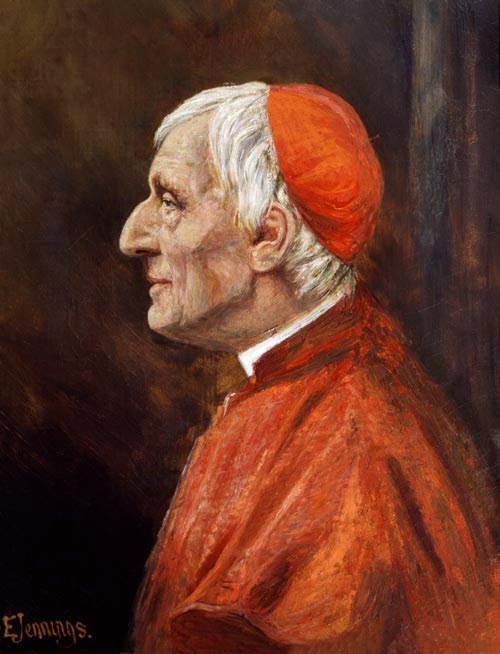 About the middle of June (1839) I began to study and master the history of the Monophysites . . . It was during this course of reading that for the first time a doubt came upon me of the tenableness of Anglicanism . . . In the middle of the fifth century, I found . . . Christendom of the 16th and the 19th centuries reflected. I saw my face in that mirror, and I was a Monophysite. The church of the Via Media was in the position of the Oriental communion, Rome was where she now is; and the Protestants were the Eutychians . . . It was difficult to make out how the Eutychians or Monophysites were heretics, unless Protestants and Anglicans were heretics also; difficult to find arguments against the Tridentine Fathers, which did not tell against the Fathers of Chalcedon; difficult to condemn the Popes of the 16th century, without condemning the Popes of the 5th. The drama of religion, and the combat and truth and error, were ever one and the same. The principles and proceedings of the Church now, were those of the Church then; the principles and proceedings of heretics then, were those of Protestants now . . . The Church then, as now, might be called peremptory and stern, resolute, overbearing, and relentless; and heretics were shifting, changeable, reserved, and deceitful, ever courting civil power, and never agreeing together. (read more from Cardinal Newman HERE).

Which finally lead Newman to declare, "to be deep in history is to cease to be Protestant."