Of Character Building, Hell, Demonic Temptation, and St. Anthony of the Desert

In these "scientific" days, many people, even many clerics, blush to speak of the supernatural and yet, it is real, our faith assures us of that (as does reason for those not blinded by a Cartesian worldview). The blinders most of us choose to wear to the supernatural can leave us open to attacks of the demonic, not just Exorcist level possession or obsession, but even just ordinary, run of the mill (though deadly) temptations.


There can be many reasons for temptations - past behavior, addiction, poor choices, physiological changes in the brain that make repeated actions easier (including evil ones), and forming bad habits, habits of evil acts. Here an old adage rings true,


Sow an action, reap a habit
Sow a habit, reap a character,
Sow a character, reap a destiny.

In that sense, we are what we repeatedly do. We have the awesome, Godlike (remember we are made in His Image), power to literally create ourselves (not ex nihilio, but in the sense of forming the kind of person we will become.) As Spiderman would say, however, "with great power comes great responsibility" and this case is no different. The great power of forming ourselves comes with the great responsibility to form ourselves into the kind of people that can be united with God forever - i.e. saints - otherwise we are failed humans and failed humans can only have one fate, left on the garbage heap (Gehenna), cast into the outer darkness (cf. Matt 8:12), into the fire where the worm dies not (Mark 9:44). This, as we have seen before, is a fate entirely (and freely) chosen by the damned, not imposed by a "cruel God" (see The Hell We Choose) and, again as we've seen previously, the fate of the damned cannot be less horrible than it is (see Couldn't God Have Made Hell a Nicer Place).

We might ask, however, why would God allow our past actions to so heavily influence our present and future actions? Why should He have so made us that the actions we "sow" today will incline us to certain, similar actions tomorrow to the point that our past actions transform our very characters and determine our destinies?

One reason we've already touched upon, the great gift of allowing us to participate in our own creation, but there is another, more important one - we are supposed to be like God. Indeed, we can only truly know man by first knowing God, or as the Second Vatican Council has it, "Christ, the final Adam, by the revelation of the mystery of the Father and His love, fully reveals man to man himself and makes his supreme calling clear. (Gaudium et Spes, 22). How, we might ask, does God act? In full accord with His nature - with His character. How, then, does He create us to act? In accord with our nature, with our character. Thus, God wants us to act habitually as this more perfectly resembles the way He acts.

This can be a great good for us, if we habituate virtue. If we, on the other hand, habituate vice (any vice) we can easily find ourselves more and more easily committing the same, and related, vices. Lie once and it becomes easier to do so again. Lie a few times and you might just develop a habit of telling falsehoods. This habit, over time, develops into a character - you become a liar, one who lies and that character can determine your eternal destiny (indeed, bearing false witness violates the Eighth Commandment when the topic is serious enough).

We, then, have to be very careful about the kind of habits we pick up along the way.

What does any of that have to do with "Demonic Temptation?" Well, we know this world isn't a playground (despite post-Enlightenment claims to the contrary), but a battlefield. We are here not for enjoyment, but for spiritual warfare. Who do we battle against? Who is out biggest foe? Satan and his evil minions. Thus, they desire nothing more than to "help" us develop evil habits, habits that they know will, ultimately, grow from the seeds of small acts into the oaks of character. Thus, according to the saints, a frequent demonic tactic is to sideline any Christian who is making progress toward God by tempting them. St. Anthony of the Desert, attests to this,


The demons, therefore, if they see all Christians... laboring cheerfully and advancing, first make an attack by temptation and place hinderances to hamper our way, to wit, evil thoughts.

Thus, if we are struggling against temptations, we can at least avail ourselves of this thought - we must be making progress enough to be worth tempting. This also means we shouldn't be surprised by the onslaught our spiritual enemies launch against us. In fact it might seem that the more devoted to Christ we are, the more tempted we become. Such is to be expected. Luckily, temptation is no sin. We need not fear temptations for they can be pathways to grow in virtue. Even temptations that arise from the demonic should not be feared, as St. Anthony goes on to attest,


But we need not fear their suggestions, for by prayer, fasting, and faith in the Lord their attack immediately fails. (Life of Saint Anthony, 23)

If you find your self struggling with sin, which - unless you are Mary, you probably are - don't lose heart. Avail yourself of the Sacraments (especially confession and the Eucharist) and keep the faith (for more encouragement to continue the struggle read this - Recurring Sin).

And always remember, God wants you to be free from sin more than even you want to be (He gave His Son just for this end, after all). You can be free, not from your own power (for apart from God we can do nothing - cf. Jn 15:5), but we can be free through His power (for with God all things are possible - cf. Phil 4:13). 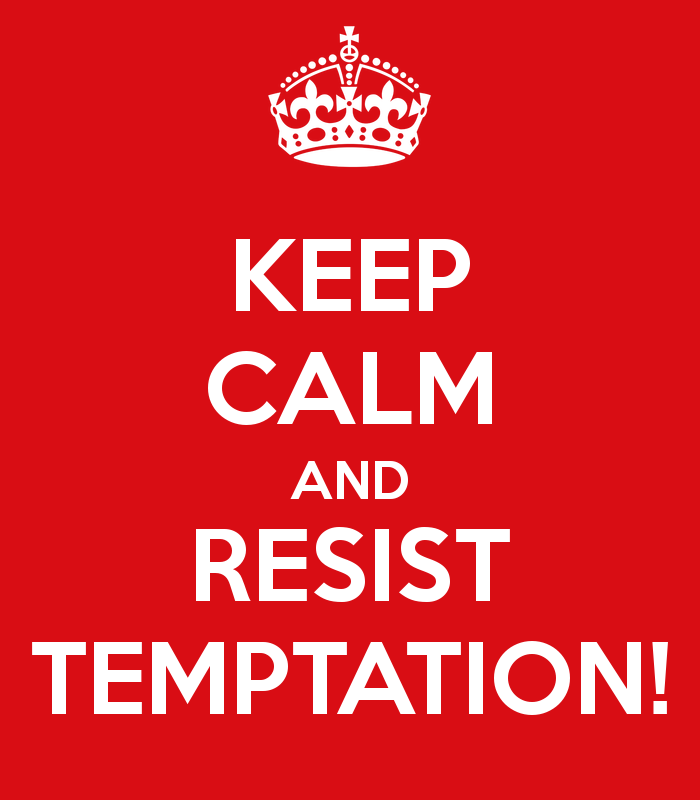