ADORO: First, thanks for sitting down with Adoro today Your Holiness. It's not everyday we have a chance to speak with a canonized saint! I asked you here to discuss something that has continued to be much debated in the Church since you left us, Natural Family Planning or periodic continence, sometimes called, mistakenly I'd suggest, the "rhythm method." Some Catholics suggest this method is just "Catholic contraception" and call for Catholic to simply have as many children as come. Do you see Natural Family Planning as something un-Catholic, something, perhaps, even immoral?
ST JP 2: Although the "periodic" character of continence is in this case applied to the so-called "natural rhythms"..., still, continence itself is a definite and permanent moral attitude, it is a virtue, and thus the whole mode of behavior guided by it becomes virtuous.1

So Natural Family Planning, in your view, isn't merely "Catholic contraception," a Church-approved technique to achieve the same ends as birth control?
The encyclical (note: Humanae Vitae) underlines rather clearly that here it is not merely a question of a certain "technique," but of ethics in the strict sense of the term as the morality of a certain behavior2... As a rational and free being, man can and should reread with insight the biological rhythm that belongs to natural order. He can and should conform himself to it for that sake of exercising "responsible fatherhood and motherhood," 3

Then coming to a better understanding of a woman's natural cycle and using that knowledge to avoid or attain a pregnancy is in no way unethical?
All efforts directed toward an ever more precise knowledge of the "natural rhythms" that become apparent in relation to human procreation, all consequent efforts of family counselors and finally of the couple themselves do not have the goal of "biologizing" the language of the body... but only of ensuring the integral truth of the "language of the body" with which couples should express themselves in a mature way.4


Then the couple may use this knowledge of a woman's infertile periods without fear of acting immorally...
The use of "infertile periods"in conjugal shared life can become the source of abuses if the couple thereby attempt to evade procreation without just reasons, lowering it below the morally just level of births in their family.5

What factors play a role in assessing the just number of births for a couple?
This just level needs to be set by taking into account not only the good of one's family and the state of one's health as well as the means of the spouses themselves, but also the good of the society to which they belong, the good of the Church, and even of humanity as a whole.6

So the couple might be justified in using the knowledge available to modern man about a woman's fertility to avoid having children...
In no way does it aim one-sidedly at limiting, even less excluding, children; it means also the willingness to welcome a greater number of children.7

Natural Family Planning, then, unlike contraception can be used both to have children and to avoid having them. Does this make the concept of "responsible parenthood" or even "planned parenthood" different for Catholics and the world?
(I)t is here that a divergence can very often be seen between what the encyclical explicitly gives primacy to and what the common mentality gives it to. The encyclical places the ethical dimension of the problem in the foreground, underlining the role of the virtue of temperance rightly understood.8

How does the world's vision differ from this?
In the common way of thinking, it often happens that the "method," detached from the ethical dimension proper to it, is applied in a merely functional and even utilitarian way. When one separates the "natural method" from the ethical dimension, one no longer sees the difference between it and the other "methods" (artificial means), and one ends up speaking about it as if it were just another form of contraception.9

Catholic married couples, then, need to focus not so much on method, although that too has moral implications, but on growing in the virtue of temperance. That sounds hard!
(T)he spouses must implore [God] for such "power" and for every other "divine help" in prayer... they must overcome their own faults and sins in the sacrament of Penance. These are the means - infallible and indispensable - to form the Christian spirituality of conjugal and familial life.10

Does this relate to traditional Church teaching on sexual morality?
According to the traditional language, love, as a superior "power,"coordinates the acts of the persons, of the husband and wife, in the area of the ends of marriage. Although... neither the conciliar constitution (note: Gaudium et Spes) nor the encyclical use the traditional language... they nevertheless speak about that to which the traditional expressions refer..... (T)he traditional teaching on the ends of marriage (and on their hierarchy) is confirmed and at the same time deepened.11 The task of love... consists... in protecting both the value of the true communion of the spouses and that of truly responsible fatherhood and motherhood.12

Can't these two ends, "communion of the spouses" and "responsible father/motherhood" be in opposition? Do those who object to the Catholic view of human sexuality have a point when they see these two ends as contradictory?
One should not speak about "contradiction" here, but only about "difficulty".... The difficulty derives from the fact that the power of love is planted in a man threatened by concupiscence: in human subjects, love comes up against the threefold concupiscence (see 1 Jn 2:26), particularly against the concupiscence of the flesh, which deforms the truth of the "language of the body." And for this reason... love is not able to realize itself... except through mastery over concupiscence.... Humanae Vitae constitutes precisely the development of this biblical truth about Christian conjugal and familial spirituality.... In order to reach mastery... the personal subject must devote himself or herself to a progressive education in self-control of the will, of sentiments, of emotions... "Continence"... consists in the ability to master, control, and orient the sexual drives (concupiscence of the flesh)... As a constant disposition of the will, such an ability deserves to be called virtue. This is very important for an adequate understanding of the virtue of continence and, in particular, of so-called "periodic continence" discussed in Humanae Vitae. The conviction that the virtue of continence "opposes" the concupiscence of the flesh is correct, but it is not entirely complete... this virtue does not appear and act abstractly... but always in connection with the other virtues... above all with love. (A)ccording to those who raise this objection, there would be a "contradiction" between the two meanings of the conjugal act, the unitive and procreative meaning... such that, if it were not licit to separate them, the spouses would be deprived of the right to conjugal union when they cannot responsibly allow themselves to procreate.... (T)here is no such "contradiction," but only a "difficulty" linked with the whole inner situation of the "man of concupiscence...." (T)he conjugal act... because it has a potentially procreative meaning... is oriented toward expressing personal union, but not only union.... The task of conjugal chastity...lies not only in protecting the importance and dignity of the conjugal act in relation to its potentially procreative meaning, but also... as it expresses interpersonal union.... It is indeed a question of not doing harm to the communion of the spouses when they should abstain from the conjugal act for the right reasons. 13

And this means "Natural Family Planning" is nothing like contraception. It isn't just about a different method of "birth control" but of virtue and vice. Catholics, then, also believe in "responsible parenthood."
The Church is fully convinced of the correctness of the principle affirming responsible fatherhood and motherhood... not only on "demographic" grounds, but for more essential reasons.... (O)ne must before all else look toward the human being as a person... and not toward the "means" that turn him into an "object" (of manipulations) and "depersonalize" him. What is at stake here is an authentically "humanistic" meaning of the development and progress of human civilization.14

So continence, as the ability to abstain from...
Continence is not only - nor even mainly - the ability to "abstain," that is, matter over the many reactions woven together in the reciprocal influence of masculinity and femininity: this sort of function can be defined as "negative." But there exists also another function of self-mastery (which we can call "positive"): and it is the ability to orient the respective reactions both as to their content and as to their character.... (C)ontinence has the essential task of maintaining the equilibrium between the communion in which the spouses want to express... their intimate union and the communion in which they (at least implicitly) welcome responsible parenthood.15


And the role of the method of Natural Family Planning plays a role in this how?
The right way of understanding and practicing periodic continence as a virtue... is also essentially decisive for the "naturalness" of the method... this is "naturalness" on the level of the person. One cannot, therefore, think of it as a mechanical application of biological laws. By itself, knowledge of the "rhythms of fertility" - though indispensable - does not yet create that interior freedom of the gift that is explicitly spiritual in nature and depends on the maturity of the inner man.16

Humanae Vitae, then, is still essential reading for Catholics today.
Humanae Vitae allows us to draw an outline of conjugal spirituality. This is the human and supernatural climate in which... the inner harmony of marriage is formed with respect to what the encyclical calls "the twofold meaning of the conjugal act" (HV 12). This harmony means that the spouses live together in the inner truth of the "language of the body." Humanae Vitae proclaims the inseparability of the connection between this "truth" and love.17

Thank you, Your Holiness, for your time. Please pray for me, for the Church, and for those confused by human sexuality and weakened by concupiscence in the world. 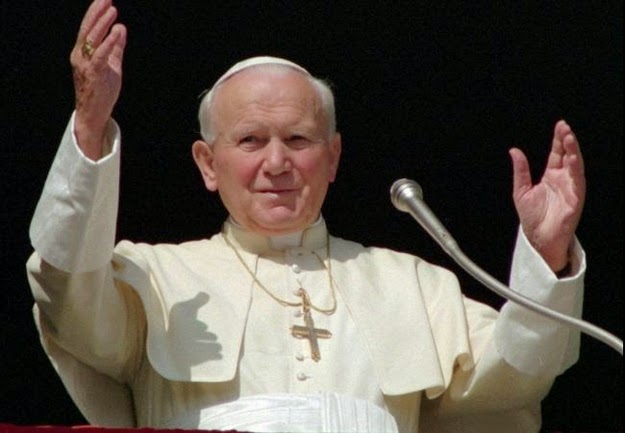 *note: all of John Paul II's answers are drawn directly from his "theology of the body" addresses as specified below. All emphases in his text are original.