"Papë Satàn, Papë Satàn, Aleppë!" are the words that greet Dante as he crosses into the fourth circle of Hell. These words, utter nonsense to us (although variously interpreted as a reference to Satan as the pope of the underworld or as a cry of distress at seeing an enemy (satàn) of Hell in Dante). Virgil, after a brief, Christlike call to Dante, "Let not thy fear Harm thee" ("Be not afraid"), turns on this latest demon, Plutus (once worshipped as the god of wealth in ancient mythology), with a stunning and effective rebuke,


"Be silent, thou accursed wolf;
Consume within thyself with thine own rage.

Not causeless is this journey to the abyss;
Thus is it willed on high, where Michael wrought
Vengeance ion the proud adultery." (VII:8-12)

The mere mention of the powers of Heaven, symbolized in the name of the mighty defeater of Satan, St. Michael the Archangel, causes Plutus to collapse to the ground as Dante and Virgil move past him to see the sinners, Plutus' devotees in life, and their punishment. 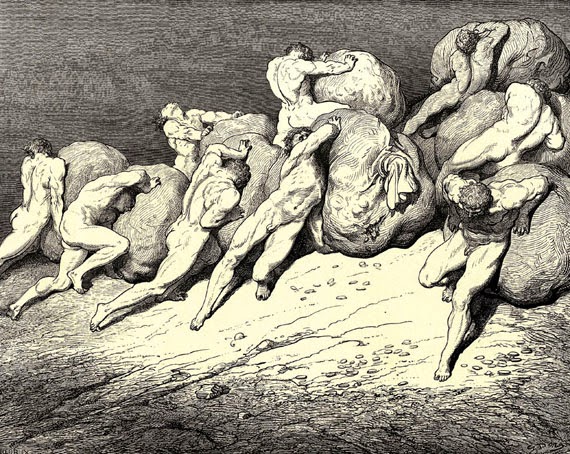 Dante, upon seeing the fate of the greedy and the prodigals, both of whom worshipped money - the former by hoarding it, the latter by spending it recklessly, is moved, once again by pity,


Justice of God, ah! who heaps up so many
New toils and sufferings as I beheld?
And why doth our transgression waste us so? (VII:19-21)

These two sets of sinners are eternally set to the task of rolling enormous weights, the weight of the money they so desperately desired in life, around the fourth circle. Each group occupies half of the circle and at each point where the two groups come to together the sinners slam their weights into one another shouting, "why hoard?" and "why waste?" at one another in an eternal, if now useless, reproach.

Dante is shocked to see so many souls condemned here. In fact, he says more souls are confined to this circle than all the souls he's yet seen added together. Money, then, is the "root of all evil" (1 Tim 6:10). Dante asks Virgil if he might not stop and see if he knows any of the souls here. Florence, after all, was, in Dante's day, on the cutting edge of economic growth and prosperity. It was Florence, with her newly minted gold coin, the Florin (1252-1533), that would transform Europe's economy and be home to some of the wealthiest men in the world. Dante's hopes of interacting with these souls are doused by Virgil. The worship of money has forever made these souls indistinguishable. Indeed, unlike souls throughout the rest of Hell, these men can't even be bothered to look up at the novel sight of a living man striding through their accursed resting place. Money is all that will never matter to them, even though,

After a brief discussion of Fate, another entity worshipped in ancient times, but now set within the Christian revelation as a minister of God, indeed as an angel, and on God's reasons for granting her the power to raise up and knock down the wealth and prosperity of societies and men, Virgil leads Dante, and us with him, father into the abyss, for time is running short (remember the entire trip through Hell must be completed on Holy Saturday. Dante is here to learn the consequences of sin, not to see the sights).

As Dante follow his guide they come to a fetid swamp, the Styx (another appropriation from classical mythology). Here, in the dark gray waves, they behold

These souls, who add to the torment of their fellow sufferers by clawing, biting, and punching each other, are the wrathful. They weren't violent in life (those sinners we'll meet later in lower Hell), but allowed anger, one of the deadly sins, to fester in them and dominate their personality. They rejected the command to love their neighbor (cf. Jn 13:34) and the forgiveness which is only on offer to those who forgive others (cf. The Our Father), instead fixating on hatred and rage. The angry state in which they died now consumes them as they rage, without result, for eternity.

Beneath the waves and feet of the wrathful, Dante sees yet more souls. These are the slothful. They could take no pleasure in life and now are denied it for eternity. Unable to "shout to God with cries of joy" (Ps 47:1) then, they are reduced to sighing,


"We sullen were
In the sweet air, which by the sun is gladdened,
Bearing within ourselves the sluggish reek;

Dante and Virgil then see signals being flashed back and forth across the Styx and notice a rapidly approaching boat, oared by Phlegyas. For those rusty on their ancient mythology, Phlegyas, a demigod (the son of Mars), in a fit of wrath, burned Apollo's temple to the ground in Delphi. Here he is seen as the epitome of wrath, and thus a fit boatsman to transport Dante and Virgil across the abode of the wrathful sinners.

As they journey across a Styx, a shade leaps from the waters, the soul of another Florentine, Filippo Argenti, who, like Francesca da Rimini, seeks to gain the pity of Dante by identifying himself as one who weeps. Dante, growing spiritually on his journey, reacts quite differently, though. Instead of weeping with the soul or collapsing into a swoon, Dante turns on his fellow Florentine in a display of righteous anger (which is contrasted nicely with the sin of wrath displayed by Argenti),


"With weeping and with wailing,
Thou spirit maledict, do thou remain;
For thee I know, though thou art all defiled." (VIII:37-39)

Virgil, happy to see Dante's spiritual progress, echoes the woman from the eleventh chapter of the Gospel of St. Luke (verse 27),


"... Indignant soul,
blessed is she in whose womb you were conceived (VIII:45, Musa)

As the boat moves forward, and Argenti is "dunked" back into the slime by his fellow sinners, much to Dante's delight (showing our pilgrim is still struggling with the sin/sinner distinction), we arrive at the walled city of Dis, the city that makes up "lower Hell" where the worst sinners are housed. The fallen angels that guard the gates of the infernal city mock the Divinely approved mission of Dante by slamming the doors in Virgil's face. Dante, frightened by the thought of his journey's progress ending with him lost in Hell, is assured by Virgil that help from Heaven will arrive. It is with this hoped for divine assistance yet to come that our canto ends, leaving us, like the chosen people before the Incarnation, awaiting a Savior...
Posted by Nathan Barontini at 4/17/2015 08:39:00 AM