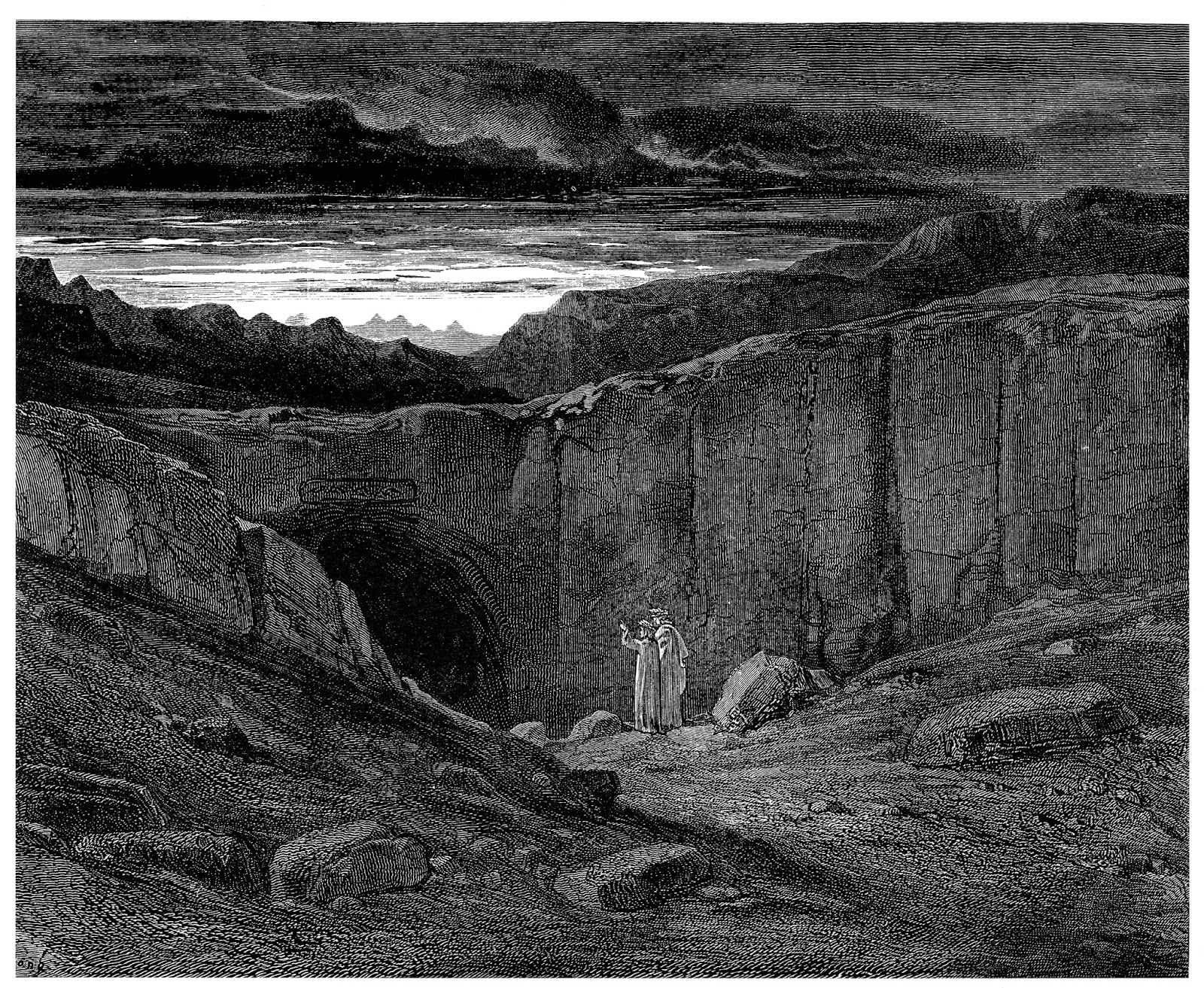 Justice incited my sublime Creator;
Created me divine Omnipotence,
The highest Wisdom and the primal Love.

Before me there were no created things,
Only eterne, and I eternal last.
All hope abandon, ye who enter in!"1

Such are the blood-chilling words our Pilgrim sees as he passes from the realm mortal into the infernal abode of the damned. His reaction is the same as yours or mine might be at reading them,

Virgil, himself damned, however, is quick to correct Dante's (at this point) still weak conscience and understanding,


"Now here you must leave all distrust behind;
let all your cowardice die on this spot.3"

With this exhortation, a smile, and a steadying hand, Virgil guides Dante into the abyss. Immediately, the scene changes from one of still, if foreboding, silence by the gate to a cacophony of screams and shouts as Dante beholds the first souls on his journey. Let's listen in...


There sighs, complaints, and ululations loud
Resounded through the air without a star,
Whence I, at the beginning, wept, thereat.

Languages diverse, horrible dialects,
Accents of anger, words of agony,
And voices high and hoarse, with sounds of hands,

Dante is taken aback by the sheer magnitude of the number of souls he sees. Indeed, he comments that he didn't think as many people had lived and died as the souls he saw there, and this at the very start of his journey. Our poet knew human frailty and unrepentant far too well to buy into a "sparsely populated Hell" or "a reasonable hope that all might be saved."

And it is with these souls, so numerous that they can't be counted, that Dante learns his first lesson, the first lesson we all must learn if we would be saints - we must choose for God. Standing in the mushy middle will get us nowhere. No, worse, will get us numbered among the throng of souls Dante sees running past Hell's gate. This message is one that Jesus Himself, with quite strong language, attempts to drive through our heads,

Yes, these are the souls of those who refused to take sides in life. Here, co-mingled, we find the angels who sided neither with God nor with Satan,5 and those humans who lived lives neither sinful nor saintly. They find themselves unable to ascend to Heaven and unable to cross into Hell proper, thus they spend eternity in the gap between the gates of Hell and the River Acheron which marks its proper border. Their punishment perfectly fits their crime. They who would follow no goal in life, now spend eternity chasing a meaningless banner through the dark, with insects prodding them along, ever faster, on their futile race. It is here, among this crowd, that Dante meets the first "famous" soul, "the coward who made the great refusal." The identity of this soul has been a matter of dispute almost from the beginning. Many today believe this to be Pope Celestine V, the last pope, before Benedict XVI, to resign from the papacy. Celestine's "refusal" to serve the Church as the successor to Peter, however, wasn't done from lukewarmness or from cowardice, but from a sense of being unequal to the task - from great humility. In fact, Celestine would be canonized in 1313, shortly after Dante began the Comedy, which makes this attribution unlikely. More likely, it seems, we've come face to face with the shade of Pontius Pilate, who can fairly be described as a "coward" and who certainly made a "great refusal," indeed the greatest.

Moving on, with great pity in his heart (Dante has yet to learn to appreciate Divine Justice, that which built Hell), our pair find their way across the Acheron over the protests of Charon, Hell's ferryman.6 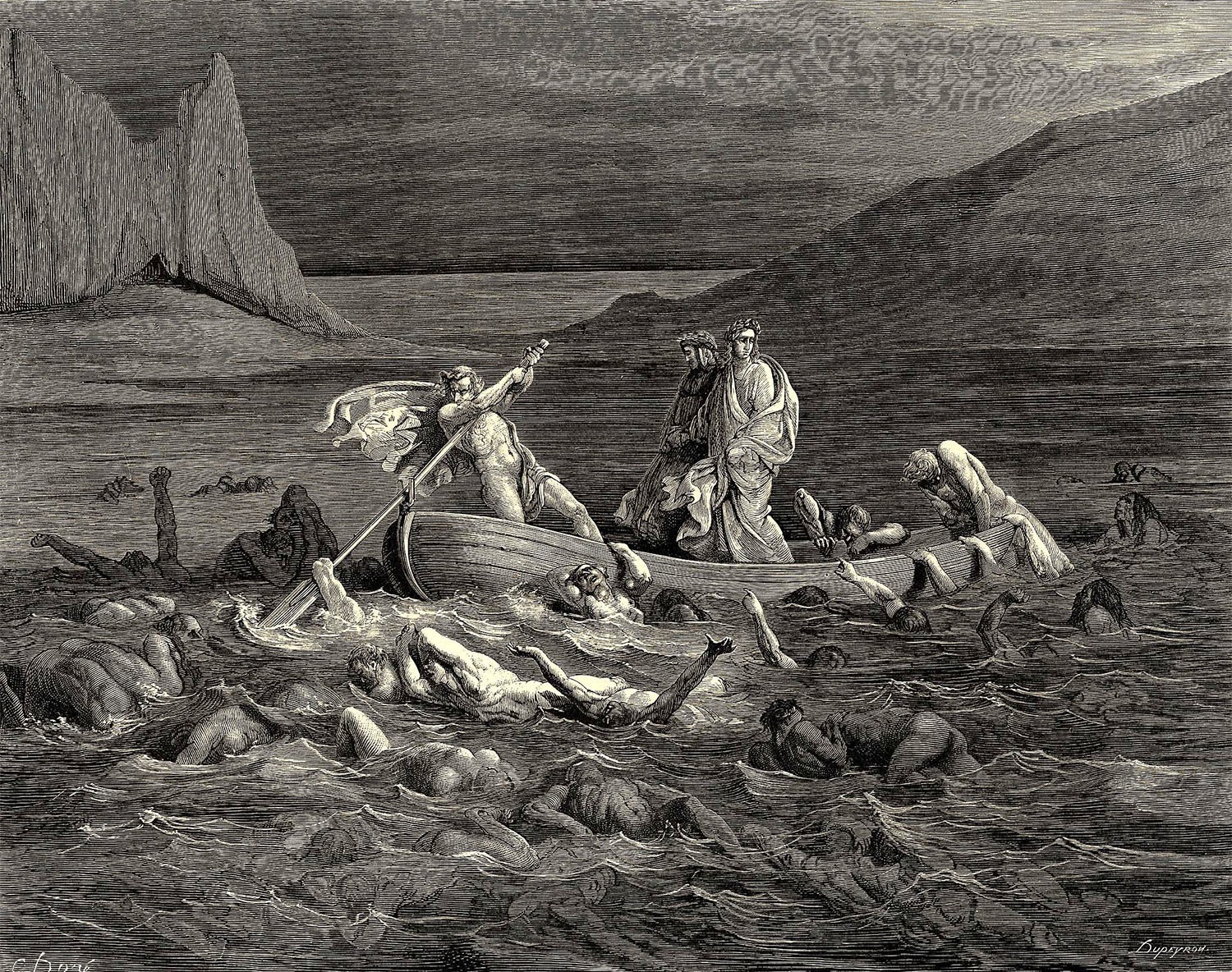 On the other side of the river, just outside the tormented souls in the remaining circles, Dante finds himself in Limbo, the only place in the Inferno where Dante isn't bombarded by the screams and wails of the damned; here only sighs are heard. Virgil, who is a native to this place, introduces Dante to the great pagan heroes (Caesar), philosophers (Plato and Socrates), and poets (in which Dante finds himself numbered among the group of the greatest - showing his own temptation to the sin of pride). Here we also find a few Muslims - Saladin, leader of the Muslim forces in the Third Crusade, and the two great Muslim commentators on Aristotle, Averroës and Avicenna. Also in this circle Dante sees the souls of the unbaptized innocents, a testament to the necessity of baptism, of the "second birth," for entrance into Heaven. The souls here may be sighing now, but they will, once the Final Judgement has come and gone, find themselves removed into the Earthly Eden, the highest state of human happiness and perfection available to those still stained with original sin.

After relishing the chance to meet such noble souls and after hearing about the "harrowing of Hell" when Adam, Moses, and others were lead out of this "Limbo", it is time to move on (Dante will traverse all of Hell in the 24 hours of Holy Saturday),


Another way my sapient Guide conducts me
Forth from the quiet to the air that trembles;

And to a place I come where nothing shines.