Does the Church Teach that Hell is Empty?

Q. Why are you bothering with Dante and his vision of Hell? Don't you know Hell is empty or at least almost empty? Pope Benedict, in Spe Salvi 45-47, said so! Thinking people are damned is no different than dissenting over Humanae Vitae! 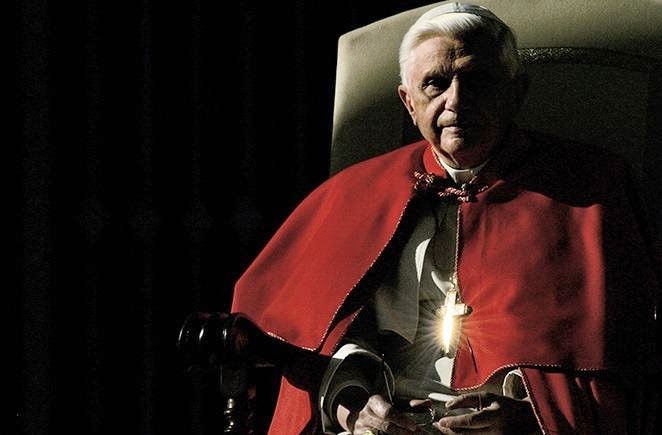 A.
This comment is incredibly misleading as to the contents of Spe Salvi and is thus unfair to Pope Benedict (as it entirely misrepresents his opinion). Let's look at the paragraphs you cited.

Paragraph 45 speaks about Purgatory and only mentions the following about Hell,


"With death, our life-choice becomes definitive—our life stands before the judge. Our choice, which in the course of an entire life takes on a certain shape, can have a variety of forms. There can be people who have totally destroyed their desire for truth and readiness to love, people for whom everything has become a lie, people who have lived for hatred and have suppressed all love within themselves. This is a terrifying thought, but alarming profiles of this type can be seen in certain figures of our own history. In such people all would be beyond remedy and the destruction of good would be irrevocable: this is what we mean by the word Hell."

Nothing here about the number of the damned, only a description of how people become damned and an admission that at least some famous people, and maybe more obscure people, fit this mold and would, then, be damned. Paragraph 45, then, seems to eliminate the idea that no one is lost.

Paragraph 47 is irrelevant to this discussion, leaving only paragraph 46 to consider. It is here that Pope Benedict offers a non-magisertrial opinion, one which is not meant to override previous magisterial teaching (see Eugenius IV's Bull Cantate Domino from the Ecumenical Council of Florence for example) or to bind theologians to agree with. Benedict says,


"For the great majority of people—we may suppose—there remains in the depths of their being an ultimate interior openness to truth, to love, to God." (emphasis mine)

Note: we may suppose, not we must suppose.

To argue that we are bound by a pope's suggested supposition or that disagreeing is tantamount rejecting Humanae Vitae is absolutely absurd. Paul VI does not say that we may suppose contraception is wrong, he magisterially declares it to be so.


Consequently, it is a serious error to think that a whole married life of otherwise normal relations can justify sexual intercourse which is deliberately contraceptive and so intrinsically wrong. (14)

Further, Paul VI is merely repeating what the Church has always taught. He isn't proposing anything new. To think Benedict meant, by offering a possible supposition, to settle this question in a way that goes against the greatest theologians in the Church's history over the last two millennia is beyond absurd. Benedict's words are clear. We Catholics are free to suppose that many are saved and free to suppose many are not. This is an open issue for theologians to explore. To suggest anything else is to show ignorance of Spe Salvi and how the magisterium of the Church is exercised. That, or it is a disingenuous attempt to misappropriate Pope Benedict's words to prop-up a misrepresentation of Church teaching.

As much as I love Benedict (readers know he's my favorite pope to read), and deeply respect any supposition of his, let's not try to attribute knowledge to Benedict that he doesn't claim to have. That's unfair to him and to faithful Catholics. No one knows what the proportion of saved to damned will be. Jesus tells us that many will be lost (Mt 7:13). Turning His words on their head, saying "no Lord, many will be saved," is clearly not Benedict's intention. 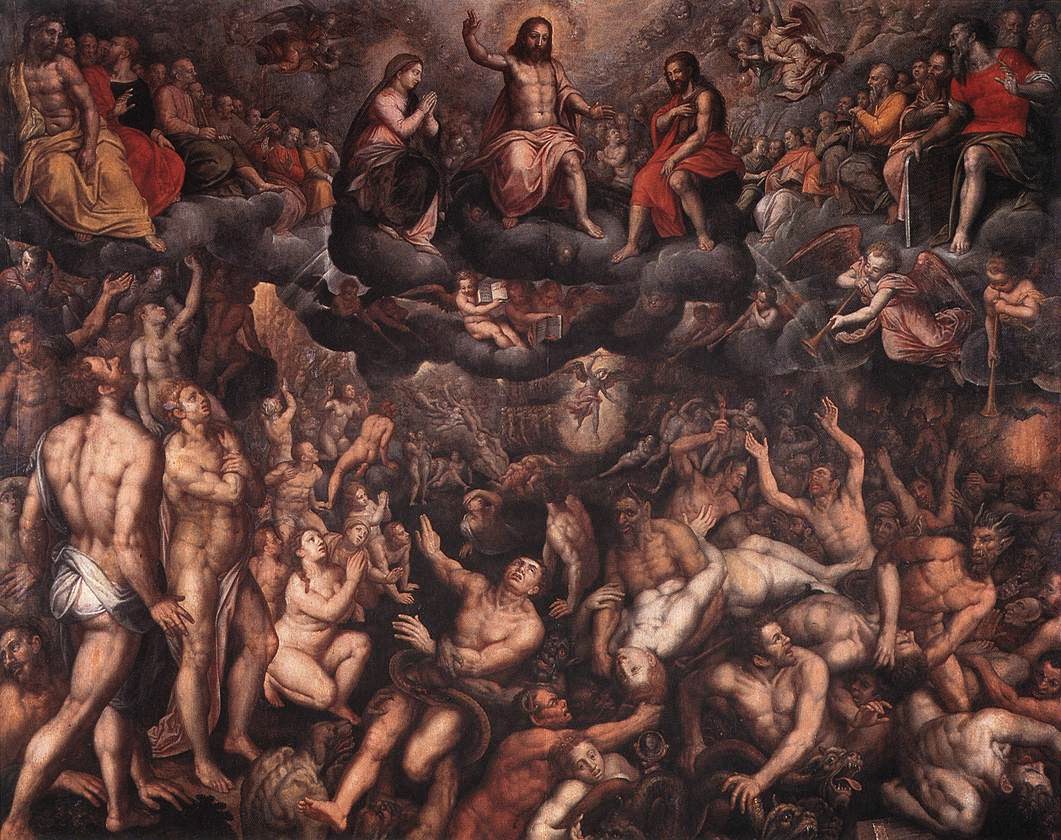 If we would reflect a little more on our great Catholic tradition, we'll see how absurd this interpretation of Spe Salvi is. St. Faustina, who received revelation from Jesus about Divine Mercy, was shown a vision of Hell, which didn't show an empty pit, but one that accords with what Jesus says in the Gospels,


Souls perish in spite of My bitter passion. I am giving them the last hope of salvation; that is the Feast of My Mercy. If they will not adore My mercy, they will perish for all eternity....Today, I was led by and Angel to the chasms of hell. It is a place of great torture; how awesomely large and extensive it is!... I am writing this at the command of God, so that no soul may find an excuse by saying there is no hell, or that nobody has ever been there.... (Diary: Divine Mercy in My Soul)

Doctor of the Church, St. Catherine of Siena, also granted to grace of revelation, clarifies hat the damned choose Hell more than God casts them into it,

How great is the stupidity of those who make themselves weak in spite of my strengthening, and put themselves into the devil's hands! I want you to know, then, that at the moment of death, because they have put themselves during life under the devil's rule (not by force, because they cannot be forced, as I told you; but they put themselves voluntarily into his hands), and because they come to the point of death under this perverse rule, they can expect no other judgement but that of their own conscience. They come without hope to eternal damnation. In hate they grasp at hell in the moment of their death, and even before they possess it, they take hell as their prize along with their lords the demons.

Vatican Two even tells us that,

often men, deceived by the Evil One, have become vain in their reasonings and have exchanged the truth of God for a lie, serving the creature rather than the Creator. Or some there are who, living and dying in this world without God, are exposed to final despair. Wherefore to... procure the salvation of all of these... the Church fosters the missions with care and attention. (Lumen Gentium 16, emphasis added).

That's right, Vatican Two teaches that often men can only be saved by missionaries bringing the Catholic Faith to them. Sadly, especially recently as the missions have fallen off and as even ancient Christian lands have become "mission territory," Vatican Two's teaching can hardly be seen as sounding an "everything's okay here, move along" note.

Finally, Our Lady, at the Church approved apparition of Fatima (the same Fatima that was accompanied by one of the most public miracles in world history - the miracle of the sun) revealed the same thing to Lucia and her friends. From Sr. Lucia's Memories,


"She opened Her hands once more, as She had done the two previous months. The rays [of light] appeared to penetrate the earth, and we saw, as it were, a vast sea of fire. Plunged in this fire, we saw the demons and the souls [of the damned]. The latter were like transparent burning embers, all blackened or burnished bronze, having human forms. They were floating about in that conflagration, now raised into the air by the flames which issued from within themselves, together with great clouds of smoke. Now they fell back on every side like sparks in huge fires, without weight or equilibrium, amid shrieks and groans of pain and despair, which horrified us and made us tremble with fright (it must have been this sight which caused me to cry out, as people say they heard me). The demons were distinguished [from the souls of the damned] by their terrifying and repellent likeness to frightful and unknown animals, black and transparent like burning coals. That vision only lasted for a moment, thanks to our good Heavenly Mother, Who at the first apparition had promised to take us to Heaven. Without that, I think that we would have died of terror and fear."

At the end of the day, I find the idea that the Angels, more perfect and intelligent than we and unaffected by original sin, could choose eternally against God, but that no human (or very few) have to be ridiculous. Will many be saved? Will many be damned? No one knows, but looking around at a society that increasingly hates Christ, His Church, His teachings, and even the natural moral law, I wouldn't bet my life on it. In fact, it seems to this blogger that more are in jeopardy of eternal self-imposed separation from God today than at any time in the history of the Church, perhaps even in the history of man. My own recommendation is to assume anyone living might be heading to Hell (so help them!) and, with anyone already dead, to hope they might have been saved, but God's Will (and more decisively, their will, be done). That might not give the same "warm fuzzy feeling" that automatically canonizing everyone we meet does, but it might just save someone's soul, maybe even your (or my) own.


For many years we have all appreciated Dr. Martin's considerable contributions to the mission of the Church. Now he gives us a profound doctrinal foundation for understanding and implementing the 'new evangelization.' This is a shot in the arm for bishops, priests, and laity as we respond to the Holy Father's call.


Dr. Ralph Martin's Will Many Be Saved? contributes significantly to a richer understanding of our faith, helps restore confidence in the gospel message, and engenders a desire to share the truth of Christ's message. An important contribution to the pastoral strategy of the 'new evangelization.'


Martin clarifies a doctrinal point that has been often obscured but must be recovered as a necessary foundation for the 'new evangelization.' This is a uniquely important book."


Provides a refreshing reminder of the undiminished urgency and validity of the missionary mandate of Jesus to his followers to evangelize.


These penetrating reflections will compel us to reassess our pastoral approach to the preaching of the gospel in our present circumstances. An important book.


Our response to the new evangelization will lack enthusiasm and conviction if we don't realize what's truly at stake here -- our eternal salvation in Christ. Ralph Martin's book provides much-needed clarity on these very important issues.


I highly recommend that all Catholics and other Christians concerned with salvation give this important book the attention it deserves.