Over at RNS we read the following reaction to the Ebola outbreak,


The Blood of Christ will not be offered during Mass. The Host will be placed in the hands, not on the tongue. And the faithful should not hold hands while reciting the “Our Father.”...

Among other precautions issued by the Diocese of Fort Worth:


Read the whole article there. A couple questions sprung to my mind...


1. Why Not Suspend the Use of All EMHC's ("Eucharistic Ministers")?
Honestly, I'm scratching my head wondering why allowing the priest (and only the priest) - who is washing his hands with alcohol before Communion - isn't among the directives. Extraordinary ministers of Holy Communion are called "extraordinary" for a reason (and it ain't 'cause they do such a great job) - because they are only to be used in special (extraordinary) circumstances. With an ebola outbreak threatening, wouldn't it make sense to limit the number of hands touching the Host all together?

2. Why Not Require (rather than forbid) Communion on the Tongue?
Speaking of limiting the number of hands touching the Host, why not forbid, rather than require, Communion in the Hand? Our hands tend to be among the dirtiest parts of our bodies. Coming into Mass we've probably touched our steering wheel, car door, Church door, other parishioners' hands, the pew, the missal, the kneeler, etc. Let's just say, even assuming we've washed our hands to go to Mass, our hands aren't exactly clean by the time communion comes around and we aren't all washing our hands in an "alcohol-based solution" right before Communion either. The priest's hands are freshly washed and will be the cleanest in the building, why not allow him (and only him) to touch the Host, allowing  each communicant to come forward, kneel reverently, and receive directly on the (clean) tongue from the (clean) hands of father? And before anyone suggests father's hands might not be so clean after he touches the first communicants tongue, allow me to point out that he doesn't touch any of the communicants tongues. He holds one edge of the Host and lays the unheld part onto the tongue of the believer. I receive on the tongue, kneeling, every week and have never had father's fingers touch my tongue.

3. What Would Our Catholic Ancestors Say?
You know the one's that survived the Plague (that killed so many people, 1 in 3 of everyone in Europe, that it has forever been immortalized simply as "the Black Death"), influenza epidemics, measles, etc without the medicines and cures we have today. Catch the Plague in the fourteenth century and your friendly doctor would treat you by nailing you and your family into your home. Did they stray into receiving Communion in the Hand? Not so much. 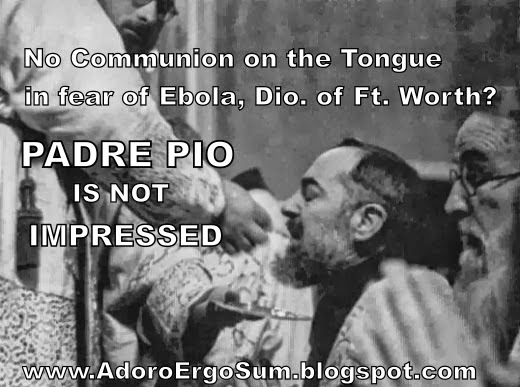