In a recent interview with the Italian newspaper La Stampa, Pope Francis corrected the record on many misinterpretations of his papacy. He addressed his comments on capitalism in Evangelii Gaudium, the possibility of women cardinals (spoiler alert: there won't be any), how he sees the role of the papacy developing, and many other "hot topic" issues that have been well reported in other places. I was drawn however, to something in the interview that I haven't seen mentioned in the blogsphere, Francis' comments on Christmas. Let's take a listen (emphasis added). 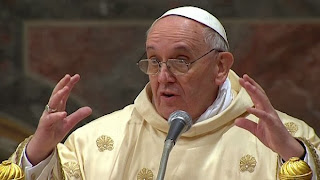 La Stampa: What does Christmas mean for you?

Pope Francis: “It is the encounter Jesus. God has always sought out his people, led them, looked after them and promised to be always be close to them. The Book of Deuteronomy says that God walks with us; he takes us by the hand like a father does with his child. This is a beautiful thing. Christmas is God’s meeting with his people. It is also a consolation, a mystery of consolation. Many times after the midnight mass I have spent an hour or so alone in the chapel before celebrating the dawn mass. I experienced a profound feeling of consolation and peace... For me Christmas has always been about this; contemplating the visit of God to his people.”

La Stampa: What does Christmas say to people today?

Pope Francis: “It speaks of tenderness and hope. When God meets us he tells us two things. The first thing he says is: have hope. God always opens doors, he never closes them. He is the father who opens doors for us. The second thing he says is: don’t be afraid of tenderness. When Christians forget about hope and tenderness they become a cold Church, that loses its sense of direction and is held back by ideologies and worldly attitudes, whereas God’s simplicity tells you: go forward, I am a Father who caresses you. I become fearful when Christians lose hope and the ability to embrace and extend a loving caress to others. Maybe this is why, looking towards the future, I often speak about children and the elderly, about the most defenceless (sic) that is. Throughout my life as a priest, going to  the parish, I have always sought to transmit this tenderness, particularly to children and the elderly. It does me good and it makes me think of the tenderness God has towards us.”


La Stampa: How is it possible to believe that God, who is considered by religions to be infinite and all-powerful, can make Himself so small?

Pope Francis: “The Greek Fathers called it syncatabasis, divine condescension that is: God coming down to be with us. It is one of God’s mysteries. Back in 2000, in Bethlehem, John Paul II said God became a child who was entirely dependent on the care of a father and mother. This is why Christmas gives us so much joy. We don’t feel alone any more; God has come down to be with us. Jesus became one of us and suffered the worst death for us, that of a criminal on the Cross.”

La Stampa: Christmas is often presented as a sugar-coated fairy tale. But God is born into a world where there is also a great deal of suffering and misery.

Pope Francis: “The message announced to us in the Gospels is a message of joy. The evangelists described a joyful event to us. They do not discuss about  the unjust world and how God could be born into such a world. All this is the fruit of our own contemplations: the poor, the child that is born into a precarious situation. The (first) Christmas was not a condemnation of social injustice and poverty; it was an announcement of joy. Everything else are conclusions that we draw. Some are correct, others are less so and others still are ideologized. Christmas is joy, religious joy, God’s joy, an inner joy of light and peace. When you are unable or in a human situation that does not allow you to comprehend this joy, then one experiences this feast with a worldly joyfulness. But there is a difference between profound joy and worldly joyfulness.”