There is a lot of talk these days about ecumenism in the Church. For those who might not know, ecumenism refers to the relations between the Church and other Christians. The push toward a more ecumenically friendly relations between Christians has been ongoing for over a century. To form a solid Catholic opinion of the matter, it is helpful to see what the Magisterium had to say at the inception of this movement and to distinguish between true and false ecumenism. To that end, here is Pope Pius XI from 1939 in his encyclical Mortalium Animos on Religious Unity (my emphasis and comments added).

Never perhaps in the past have we seen, as we see in these our own times, the minds of men so occupied by the desire both of strengthening and of extending to the common welfare of human society that fraternal relationship which binds and unites us together, and which is a consequence of our common origin and nature...

(First the Pope turns to address what we now style "inter-religious dialogue.")
2. A similar object is aimed at by some, in those matters which concern the New Law promulgated by Christ our Lord. For since they hold it for certain that men destitute of all religious sense are very rarely to be found, they seem to have founded on that belief a hope that the nations, although they differ among themselves in certain religious matters, will without much difficulty come to agree as brethren in professing certain doctrines, which form as it were a common basis of the spiritual life. For which reason conventions, meetings and addresses are frequently arranged by these persons, at which a large number of listeners are present, and at which all without distinction are invited to join in the discussion, both infidels of every kind, and Christians, even those who have unhappily fallen away from Christ or who with obstinacy and pertinacity deny His divine nature and mission. Certainly such attempts can nowise be approved by Catholics, founded as they are on that false opinion which considers all religions to be more or less good and praiseworthy, since they all in different ways manifest and signify that sense which is inborn in us all, and by which we are led to God and to the obedient acknowledgment of His rule. Not only are those who hold this opinion in error and deceived, but also in distorting the idea of true religion they reject it, and little by little. turn aside to naturalism and atheism, as it is called; from which it clearly follows that one who supports those who hold these theories and attempt to realize them, is altogether abandoning the divinely revealed religion. (Pius sees that the idea that all religions are "good" quickly leads to religious relativism, then to atheism. He was a prophet.)

(and now we look at ecumenism proper - the relationship between the Church and other Christians)
4. Is it not right, it is often repeated, indeed, even consonant with duty, that all who invoke the name of Christ should abstain from mutual reproaches and at long last be united in mutual charity? ... All Christians, they add, should be as "one": for then they would be much more powerful in driving out the pest of irreligion, (Dr. Kreeft's 'ecumenical jihad')... These things and others that class of men who are known as pan-Christians continually repeat and amplify; and these men, so far from being quite few and scattered, have increased to the dimensions of an entire class, and have grouped themselves into widely spread societies...This undertaking is so actively promoted as in many places to win for itself the adhesion of a number of citizens, and it even takes possession of the minds of very many Catholics and allures them with the hope of bringing about such a union as would be agreeable to the desires of Holy Mother Church, who has indeed nothing more at heart than to recall her erring sons and to lead them back to her bosom. But in reality beneath these enticing words and blandishments lies hid a most grave error, by which the foundations of the Catholic faith are completely destroyed.(the "pan-Christians" were advocating a "mere Christianity" where Christians would put aside their theological differences and decide to get along in charity. Pius notes that true ecumenism leads souls back to the Catholic Church and doesn't water down the faith.)

6. ...God might... have prescribed for man's government only the natural law, which, in His creation, He imprinted on his soul, and have regulated the progress of that same law by His ordinary providence(God could have only gave man a 'natural' non-revealed religion) ; but He preferred rather to impose precepts, which we were to obey, and in the course of time, namely from the beginnings of the human race until the coming and preaching of Jesus Christ, He Himself taught man the duties which a rational creature owes to its Creator... From which it follows that there can be no true religion other than that which is founded on the revealed word of God: which revelation, begun from the beginning and continued under the Old Law, Christ Jesus Himself under the New Law perfected. Now, if God has spoken (and it is historically certain that He has truly spoken), all must see that it is man's duty to believe absolutely God's revelation and to obey implicitly His commands; that we might rightly do both, for the glory of God and our own salvation, the Only-begotten Son of God founded His Church on earth. (i.e. the Church is willed by God to aid men to rightly obey God's commands and believe His revelation, the Church isn't optional for it is established by God.) Further, We believe that those who call themselves Christians can do no other than believe that a Church, and that Church one, was established by Christ; but if it is further inquired of what nature according to the will of its Author it must be, then all do not agree. A good number of them, for example, deny that the Church of Christ must be visible and apparent, (many Protestants hold this view today) at least to such a degree that it appears as one body of faithful, agreeing in one and the same doctrine under one teaching authority and government; but, on the contrary, they understand a visible Church as nothing else than a Federation, composed of various communities of Christians, even though they adhere to different doctrines, which may even be incompatible one with another. Instead, Christ our Lord instituted His Church as a perfect society, external of its nature and perceptible to the senses, which should carry on in the future the work of the salvation of the human race, under the leadership of one head, ... for which reason He attested by comparison the similarity of the Church to a kingdom, (visible) to a house (also visible), to a sheepfold,(visible again) and to a flock (visible). This Church, after being so wonderfully instituted, could not, on the removal by death of its Founder and of the Apostles who were the pioneers in propagating it, be entirely extinguished and cease to be, for to it was given the commandment to lead all men, without distinction of time or place, to eternal salvation... It follows then that the Church of Christ not only exists to-day and always, but is also exactly the same as it was in the time of the Apostles, unless we were to say, which God forbid, either that Christ our Lord could not effect His purpose, or that He erred when He asserted that the gates of hell should never prevail against it.(which would make Christ a false prophet and thus not Divine).

(We'll look at the rest of Moralium animos tomorrow). 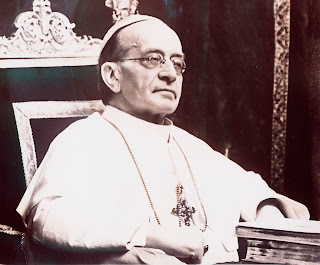