Yesterday on the blog, we looked at Pope Benedict's answer to the question, "what's so new about the New Evangelization." In doing so, we turned to a homily he gave on Oct 7, 2012 - right at the beginning of the Year of Faith. Today, I want to draw our attention to another part of that homily, where our Pope Emeritus addresses the issue of marriage, something much in the news these days what with the upcoming Synod on Family and Marriage. (Emphasis added)


The message of the word of God may be summed up in the expression found in the Book of Genesis and taken up by Jesus himself: “Therefore a man leaves his father and his mother and cleaves to his wife, and they become one flesh” (Gen 2:24; Mk 10:7-8). What does this word say to us today? It seems to me that it invites us to be more aware of a reality, already well known but not fully appreciated: that matrimony is a Gospel in itself, a Good News for the world of today, especially the dechristianized world. The union of a man and a woman, their becoming “one flesh” in charity, in fruitful and indissoluble love, is a sign that speaks of God with a force and an eloquence which in our days has become greater because unfortunately, for various reasons, marriage, in precisely the oldest regions evangelized, is going through a profound crisis. And it is not by chance. Marriage is linked to faith, but not in a general way. Marriage, as a union of faithful and indissoluble love, is based upon the grace that comes from the triune God, who in Christ loved us with a faithful love, even to the Cross. Today we ought to grasp the full truth of this statement, in contrast to the painful reality of many marriages which, unhappily, end badly. There is a clear link between the crisis in faith and the crisis in marriage... 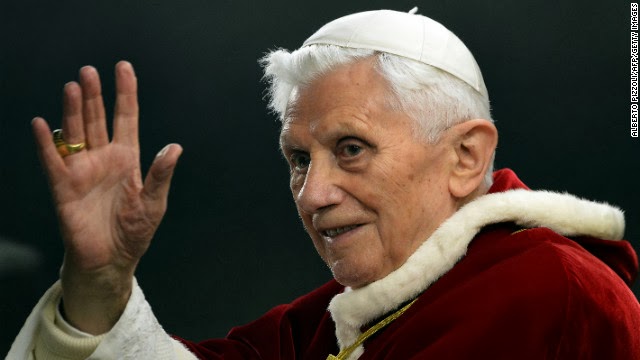 We won't fix the problems of marriage until we fix the faith of most Americans. We won't win the same sex marriage struggle until we win souls for Christ. We won't see the divorce and cohabitation rates drop until we convert our society to the Truth of the Church. Using "secular" arguments will only get us so far - this is a battle that can only be won by bringing our country under the light yoke of Christ the King.
Posted by Nathan Barontini at 12/19/2013 09:43:00 AM