The Feast of Christ the King

This weekend is the patronal feast of this blog, the Feast of Christ the King. In honor of one of my favorite feasts in the Church, I thought we'd take a closer look... 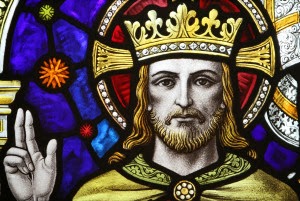 What is the official name of this feast?
While it is popularly known as the Feast of Christ the King, it's technical name is the Solemnity of Christ the King. It's original Latin title was Dominus Nostri Jesu Christi Regis, which was changed by Pope Paul VI to Dominus Nostri Jesu Christi universorum Regis (Our Lord Jesus Christ King of the Universe).

What is a "solemnity"?
Solemnity is the highest rank given to a feast by the Church.

What color vestments will the priest be wearing tomorrow?
White or Gold as he does for all major feasts.


Is Christ the King celebrated in the forma extraordinaria, the 'traditional Latin Mass'?
Yes, but on a different date. In the old pre-Vatican 2 calendar the Feast of Christ the King is celebrated on the last Sunday in October, the Sunday before All Saint's Day. This is one of those areas where we might be better off changing the old calendar to match up with the new. That, however, is well above my pay grade.

Is this an ancient feast?
No. In fact it only dates to the twentieth century. Pope Pius XI founded the feast with his 1925 encyclical Quas Primus. That means no complaining about the change of date after Vatican Two.

Is there any Biblical evidence that Jesus is a King? I thought He was a poor, simple man.
Saint Paul, in his letter to the Philippians tells us that Jesus


"being in the form of God, thought it not robbery to be equal with God: But made himself of no reputation, and took upon him the form of a servant, and was made in the likeness of men: And being found in fashion as a man, he humbled himself, and became obedient unto death, even the death of the cross. Wherefore God also hath highly exalted him, and given him a name which is above every name: That at the name of Jesus every knee should bow, of things in heaven, and things in earth, and things under the earth; And that every tongue should confess that Jesus Christ is Lord, to the glory of God the Father." (2:6-11)

and in First Timothy he tells us that Jesus

and in the Book of Revelations we read that Jesus

Examples multiply, but I'll end with my favorite. The unwitting proclamation of Pontius Pilate


"And Pilate wrote a title, and put it on the cross. And the writing was Jesus Of Nazareth The King Of The Jews." (John 19:19)


Do any other Christians celebrate this feast?
Yes. Following the lead of Pius XI in honoring Christ as King with this feast are Anglicans, Lutherans, Methodists, Presbyterians, the Church of England, the United Church of Christ, and some Eastern Orthodox Churches all of whom adopted the feast after the Catholic Church. I suppose even high Church Protestants can look to Rome for guidance now and then. I'd call that ecumenism at its best.

What other posts have you written on Christ the King?
Several:

Christus Rex Est - being a brief overview of the feast

Quas Primus, Pope Pius XI on Christ the King (pt 1) - being a look at the Papal Encyclical of Pius XI

Quas Primus, Pope Pius XI on Christ the King (pt 2) - being the second part of the same.

Homeless Jesus - being a reflection on a statue blessed by Pope Francis.

The Homeless King - being the second part of the same.

Our World is "Enemy-Occupied Territory. Are YOU Ready to Fight? - being a call to arms of sorts.