Our World is "Enemy-Occupied Territory". Are YOU Ready to Fight?

I ran into this picture online: 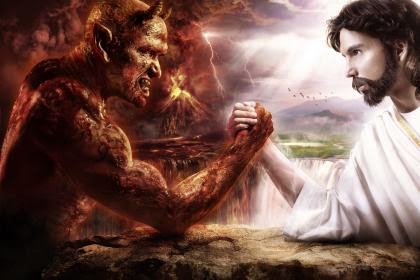 And thought it was great. In fact, better than great. It perfectly sums up the religion of Manichaeism (related to Zoroastrianism). Manichaeism was a religion based on the idea of Dualism - that the world is governed by two equal powers, one evil and one good. Basically, dualists think there is a good god who is the source of good in the universe and an evil god who is the source of evil. Commonly, the "spiritual plane" is considered to be the creation of the good god, while the "physical plane" is the domain of the evil god. Manichaeans, because of this view, hated the physical and extolled the spiritual (this idea is still alive and well in "New Age" spiritualities, which are neither new nor products of our age). Manichaeans thus hated birth, it trapped another soul in a physical body, lauded suicide, were all for sex - as long as it was sterile (contraception, abortion, and homosexuality were fine, monogamous marriage was frowned upon), and basically had a very upside-down view of the world and morality. These two gods were equals and they battled eternally (for what reason, I'm not sure).

Sadly, some Christians are really semi-Manichaeans, like the creator of the image above. They think of Satan as if he was somehow an evil god, equal to and in combat with the True God. Of course, this isn't Christianity at all. If anyone is the good, yet equal, counterpart to Satan in orthodox, historic Christianity, it isn't Jesus, but St. Michael the Archangel, who cast Satan into hell during his rebellion against God. Satan is in no way the evil equal of God, who both created Satan and sustains him in existence. God isn't struggling against Satan, we are. Jesus isn't arm-wrestling Satan, we are (with His help, of course).

This all being said (and it is important to be clear on all of this), dualism (and the picture at the top of this post) doesn't have everything wrong. Like most popular theological errors, it has truth, but it has it has it out of proportion. There is a war in the universe. It is between good and evil, it just isn't the kind of war dualist thought it was. CS Lewis, the master apologist, points this out in his classic Mere Christianity:


...real Christianity (as distinct from Christianity-and-water) goes much near to Dualism than people think.... Christianity agrees with Dualism that this universe is at war. But it does not think this is a war between independent powers. It thinks it is a civil war, a rebellion, and that we are living in a part of the universe occupied by the rebel.
Enemy-occupied territory - that is what this world is. Christianity is the story of how the rightful king has landed, you might say landed in disguise, and is calling us all to take part in a great campaign of sabotage. (pgs 45-46)