Grow in Holiness this Advent, the Three Advents of Christ

Yesterday, the Church's liturgical year began anew with the first Sunday of Advent. This is a time of preparation, though not penance, for the coming of the great feast of the Nativity of Our Lord. Just as Lent precedes Easter, so too does Advent precede Christmas.

We can all understand the power a good Lent has to make Easter truly celebratory. But many Catholics have lost a real sense of Advent as it has been trampled under the shopping frenzy that is the secular build-up to the feast.

What is Advent Anyhow?
As a refresher for those who might not be sure what exactly Advent is and what we are supposed to be doing, I direct you to the Catholic Encyclopedia:


with Advent the ecclesiastical year begins in the Western churches. During this time the faithful are admonished

• to prepare themselves worthily to celebrate the anniversary of the coming into the world as the God of love,
• thus to make their souls fitting abodes for the coming in Holy Communion and through grace, and
• thereby to make themselves ready for His final coming as, at death and at the end of the world.

Advent, then, is a time to focus on the coming of Jesus. This is made clear in the name itself. "Advent" comes from the Latin "ad-venio" meaning "come to" or "coming."

What Are We to Dwell on During Advent?
With Christmas on the horizon it is easy enough to look back on the first coming of Christ, His birth into our sinful world on the first Christmas.

With the Feast of Christ the King behind us, hopefully, it is easy to keep in mind the final coming of Christ, that as the just judge at the world's end.

How different these advents are!

Perhaps no one has laid bare just what Christ's first advent really was better than C.S. Lewis,


Enemy-occupied territory - that is what this world is. Christianity is the story of how the rightful king has landed, you might say landed in disguise, and is calling us all to take part in a great campaign of sabotage. When you go to church you are really listening-in to the secret wireless from our friends: that is why the enemy is so anxious to prevent us from going. (Mere Christianity).

Compare that to Christ the All Powerful King, best presented, perhaps, by Michelangelo Buonarroti, 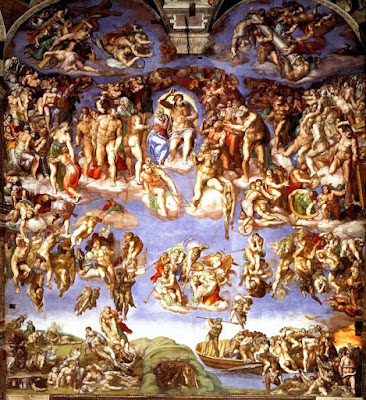 Not exactly landing "in disguise" this time is He?

There is, however, a third advent of Christ that we all would do well to ponder over the next four weeks. If the Nativity is the First Advent and the Last Judgement is the Final Advent, this other advent is one that occurs not once in the past or in the future, but each and every day in the heart of all believers and thus is the most important advent of all to dwell on during this season.

With that teaser, I'll direct you to:

a post I wrote on St. Bernard of Clairvaux's description of the Three Advent's of Christ and, once you've digested Bernard,

And I will encourage you to:

use Dante' Divine Comedy as an Advent mediation on the Three Advents of Christ, each of which is "hidden" in the poem (don't worry you won't have to find them, I lay them all out HERE).

How is this Supposed to Make me Holier this Advent?
In a word, meditation. While the word "meditation" frequently brings to mind certain "mind-clearing" techniques used in eastern religions, there is an authentic and very important form of meditation in our Christian tradition stretching back to the first centuries after Christ. This is laid out by the Congregation for the Doctrine of the Faith in a 1989 letter to bishops (under the signature of then Cardinal Ratzinger, our present Pope Emeritus).

The meditation of the Christian in prayer seeks to grasp the depths of the divine in the salvific works of God in Christ, the Incarnate Word, and in the gift of his Spirit. These divine depths are always revealed to him through the human-earthly dimension. Similar methods of meditation, on the other hand, including those which have their starting-point in the words and deeds of Jesus, try as far as possible to put aside everything that is worldly, sense perceptible or conceptually limited. It is thus an attempt to ascend to or immerse oneself in the sphere of the divine, which, as such, is neither terrestrial, sense-perceptible nor capable of conceptualization. (Letter on Some Aspects of Christian Meditation).

Advent, being a time a quiet reflection and prayer, is the perfect time to delve into this tradition. As stated by the CDF, Christian meditation differentiates itself from eastern meditation in that the Christian is meditating on some aspect of his faith while the eastern mystic is clearing his mind of everything. GK Chesterton brings out this difference,

No two ideals could be more opposite than a Christian saint in a Gothic cathedral and a Buddhist saint in a Chinese temple. The opposition exists at every point; but perhaps the shortest statement of it is that the Buddhist saint always has his eyes shut, while the Christian saint always has them very wide open. The Buddhist saint has a sleek and harmonious body, but his eyes are heavy and sealed with sleep. The medieval saint’s body is wasted to its crazy bones, but his eyes are frightfully alive. There cannot be any real continuity between forces that produce symbols so different as that. Granted that both images are extravagances, are perversions of the pure creed, it must be a real divergence which could produce such opposite extravagances. The Buddhist is looking with a peculiar intentness inwards. The Christian is staring with a frantic intentness outwards. (Orthodoxy, p. 194)

By meditating on this great mystery, the coming of God-in-the-Flesh, you can grow closer to Jesus, the perfect preparation to celebrate His Nativity.

And isn't growing closer to Jesus - i.e. growing in holiness - the real "reason for the season?"

Have a Holy Advent!

For a detailed look at the Three Advents of Christ in Dante's Comedy, I highly recommend Mark Musa's Advent at the Gates.

For a deep meditation of the Nativity of Christ, I highly recommend Pope Benedict XVI's Jesus of Nazareth: The Infancy Narratives.

Emails go out about once a week, usually on Monday or Tuesday.