Of Milton, Dante, and Shakespeare 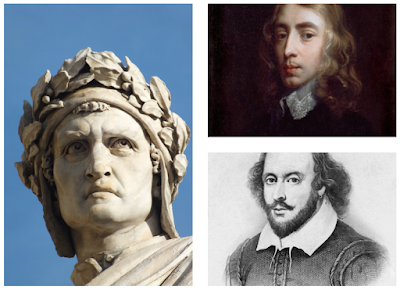 
The comparison of Dante and Milton is at best a stupid convention.... Milton resembles Dante in nothing; judging superficially, one might say that they both wrote long poems which mention God and the angels, but their gods and their angels are as different as their styles and abilities. Dante's god is ineffable divinity. Milton's god is a fussy old man with a hobby. Dante is metaphysical, where Milton is merely sectarian. Paradise Lost is conventional melodrama, and later critics have decided that the Devil is intended for the hero, which interpretation leaves the whole without significance. Dante's Satan is undeniably evil. He is not "Free Will" but stupid malignity. Milton has no grasp of the superhuman. Milton's angels are men of enlarged power, plus wings. Dante's angels surpass human nature, and differ from it. They move in their high courses inexplicable.... Milton, moreover, shows a complete ignorance of the things of the spirit. Any attempt to compare the two poets as equals is bathos, and it is, incidentally, unfair to Milton, because it makes one forget all his laudable qualities. Shakespear (sic) alone of the English poets endures sustained comparison with the Florentine. Here are we with the masters; of neither can we say, "He is the greater";  of each we must say, "He is unexcelled."... Our knowledge of Dante and of Shakespear (sic) interacts; intimate acquaintance with either breeds that discrimination which makes us more keenly appreciate the other.