The Three Advents of Christ in Dante

This Advent we've been looking at the traditional Three Advents, or comings, of Christ. First, in a general way, then sitting at the feet of the great Bernard of Clairvaux. Today, let's see what the greatest Christian poet, Dante Alighieri, can tell us about these comings by looking at his greatest work, The Divine Comedy, in which all three Advents are symbolically present.

First Advent of Christ - The Incarnation
In Canto IX of the Inferno (wherein Dante travels through Hell) we read how he and Virgil (Dante's guide) are barred from passing into the Infernal City of Dis (the deepest part of the Netherworld). Dante's trip has been ordained by Divine Providence and his passage cannot be stopped by Satan. To open the doors to the doleful city an angel suddenly appears amidst the terrors of Hell (just like Christ appeared amongst a sinful world). This mirrors the culmination of the First Advent of Christ - The Harrowing of Hell, when Christ "preached to those spirits that were in prison" (1 Peter 3:19)


and then, above the filthy swell, approaching,
a blast of sound, shot through with fear, exploded,
making both shores of Hell begin to tremble;

it sounded like one of those violent winds,
born from the clash of counter-temperatures,
that tear through forests; raging on unchecked...

As frogs before their enemy, the snake,
all scatter through the pond and then dive down
until each one is squatting on the bottom,

so I saw more than a thousand fear-shocked souls
in flight, clearing the path of one who came
walking on the Styx, his feet dry on the water.

From time to time with his left hand he fanned
his face too push the putrid air away,
and this was all that seemed to weary him.

I was certain now that he was sent from Heaven.
I turned to my guide, but he made me a sign
to keep my silence and bow low to this one.

Ah the scorn that filled his holy presence!
He reached the gate and touched it with a wand;
it opened without resistance from inside.

"O Heaven's outcasts, despicable souls,"
he started, standing on the dreadful threshold,
"what insolence is this that breeds in you?"

Second Advent of Christ - Conversion
In Canto VIII of the Purgatorio we see the Second Advent of Christ. Here Dante is traveling through the valley of the Princes in the anti-purgatory (the area just outside of Purgatory proper) when, just as night is about to fall, Dante learns that a serpent (symbol of the devil) comes into the valley each night to tempt the departed. Of course, the souls in purgatory are beyond the reach of Satan, so two angels appear to protect the holy souls from his reach. This mirrors the daily coming of Christ into the hearts of believers, giving them the grace to stay away from sin and the grasp of the prince of this world.

and then I saw descending from on high
two angels with two flaming swords, and these
were broken short and blunted at the end.

Their garments, green as tender new-born leaves
unfurling, billowed out behind each one,
fanned by the greenness of their streaming wings...

"From Mary's bosom both of them descend
to guard us from the serpent in the vale,"
Sordello said. "He'll soon be here, you'll see."...

"But then Sordello clutched his arm and said:
"Behold our adversary over there!" -
he pointed to the place where we should look...

I did not see, so I cannot describe,
how the two holy falcons took to flight,
but I saw clearly both of them fly down.

Hearing those green wings cutting through the air,
the serpent fled, the angels wheeled around,
flying in perfect time back to their posts.

then, one of them, as sent from Heaven, sang
Veni, sponsa, de Libano, three times,
and all the other voices followed his.

As at the Final Summons all the blest
will rise out of their graves, ready to raise
new-bodied voices singing 'Hallelujah!'

just so rose up above the heavenly cart
a hundred spirits ad vocem tanti senis,
eternal heralds, ministers of God,

all shouting: Benedictus qui venis! then,
tossing a rain of flowers in the air,
Manibus, O date lilia plenis!...

I sensed the regal sternness of her face,
as she continued in the tone of one
who saves the sharpest words until the end:

"Yes look at me! Yes, I am Beatrice!
So, you at last have deigned to climb the mount?
You learned at last that here lies human bliss?"

I lowered my head and looked down at the stream,
but, filled with shame at my reflection there,
I quickly fixed my eyes upon the grass.

I was the guilty child facing his mother,
abject before her harshness: harsh, indeed,
is unripe pity not yet merciful. 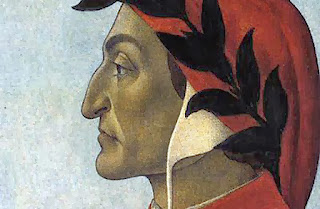 What do you think? How does reflecting on this sublime poetry from the height of Christendom help deeper your devotion to the Advents of Christ?