St Dominic, Kind unto his Own, Severe with his Foes.

Today, the Church celebrates the feast of one of her great saints - Dominic de Guzmán. In his honor, I thought I'd let Dante offer up his praise. This in the singing verse translation by Laurence Binyon.


Therein was born the enthusiast amorous
Of Christian faith, the saintly wrestler, kind
Unto his own, severe unto his foes.
So charged, soon as created, was his mind,
With quickening power, that in the womb it led
His mother a prophetic tongue to find....
And that his name should with himself accord,
They called him, prompted by a spirit from here,
By the possessive of his only Lord.
Dominic was he named and I aver
He was a husbandman chosen by Christ
To tend his garden and be His helper there.
Messenger and familiar of Christ
He showed him; for his love's first loyalties
Clung to the first great counsel given by Christ.
Often, awake and silent on his knees,
His nurse would find him on the floor, as who
Should there be saying: 'I am come for this....'
A mighty teacher soon, he went his way
About the vineyard to restore the vine
Which, tended ill, fast withers and goes gray....
With doctrine and with will then, both endorsed
With the apostolic office, forth he went
Swift as a torrent from some high vein forced.
On stocks and stumps of heresy he spent
His vehemence, most impetuously where
Most stubborn was the opposed impediment. (Paradiso 11.55-102) 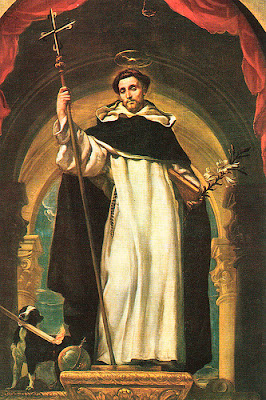