Encountering Jesus in Beauty. A Reflection on the Sistine Chapel.

We've discussed the argument for the existence of God from beauty a couple times here on the blog:


It should, then, come as little surprise to long time readers that my own conversion to Catholicism was influenced by beauty. Truth may have been the primary factor in my conversion, but the other two transcendentals (beauty and goodness) each had their own, significant, role to play.

I go into a bit of detail on how beauty shaped my journey towards truth over at Catholic365, in my latest:

Michelangelo and Metanoia. A Personal Reflection on the Sistine Chapel.

That's an odd moment when I'm feeling more like St. Augustine than St. Thomas Aquinas at my desk, but Rome (and beauty) can do that to a blogger!

Here I'd like to elaborate a bit more on why I think my experience in the Sistine Chapel, my experience with beauty, was so profound. 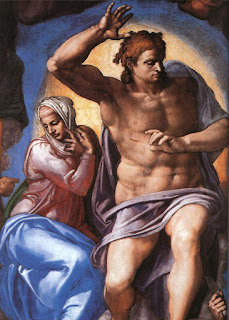 If I had to sum it up in a single word it would be "encounter."

Reading the Scriptures, one can't help but notice the power of the first encounter with Christ. When St. Peter first meets Jesus he receives the command, "put out into the deep (Lk 5:4)." Peter cooperates and is forever altered. The disciples on the road to Emmaus, depressed over the death of Jesus, encounter the Risen One and cry out to one another "where not our hearts burning within us (Lk 24:32)." Saul, on the road to Damascus, meets Jesus and goes from being the most fervent anti-Christian persecutor to become the Apostle to the Gentiles. Encounter. Transformation. It is always the same story. Archbishop Fulton Sheen once noted, when reflecting on the Christmas narrative, that of course the Wise Men returned home "by another way (Matt 2:12)" for "no one who ever meets Christ with a good will returns the same way as he came. (Magi and the Slaughter of the Innocents)"

That encounter is what our great Catholic Faith is all about. It isn't about rules. It is about a relationship - a relationship with the God who becomes a man so that we might encounter Him. So that we, so that you and I, might meet Him. That is what everything in our Holy Catholic Faith is all about. Nothing in our religion, the prescriptions, the rituals, the morality - none of it makes sense apart from meeting the man Christ Jesus. That is why the original proclamation wasn't morality, wasn't even (despite what some liberal Christians might wish to think) "be kind" but rather was "He is Risen" (i.e. you can meet this man!).

Dr. Peter Kreeft has said he personally has known several people who were converted by beauty, who were converted by listening to Bach's St. Matthew Passion. Such beauty, they realized, simply wasn't compatible with a meaningless, atheistic, materialistic worldview. Dr. Kreeft, in his Letters to an Atheist explains that these moments are


"signals of transcendence," fingers pointing beyond themselves towards exits from the cave (i.e. this world).... It's not just sentimentalism; it's an intellectual intuition: the music we have in our soul just has to match the music outside our soul. There has to be more. Not that it's not a great cave. But there has to be more. We see this with most conviction not when we are poor and in pain, when the cave is the smallest and darkest and most uncomfortable. It's precisely at those moments when we feel the cave's greatness the most, when we are most open to the charms and beauties of our physical and emotional universe, that we feel this "divine discontent," this "lover's  quarrel with the world."

My Sistine experience was quite a bit subtler. I wasn't converted (I'm too much a philosopher for that I suppose. I needed arguments to finish the job), but my soul had been enriched by Michelangelo's masterpiece. No longer was I one type or another of "bad soil" described by Christ in the Parable of the Sower (Matthew 13:1-23, Mark 4:1-20 and Luke 8:4-15). I would, slowly, be prepared to receive the Gospel years later by this first encounter.

C.S. Lewis, himself a covert to Christianity, in his book Miracles masterfully captures the feeling - and the resistance - to this encounter and why we often prefer something less "personal" than the "living God,"


"Men are reluctant to pass over from the notion of an abstract and negative deity to the living God. I do not wonder. Here lies the deepest taproot of Pantheism and of the objection to traditional imagery. It was hated not, at bottom, because it pictured Him as a man but because it pictured Him as a king, or even as a warrior. The Pantheist’s God does nothing, demands nothing. He is there if you wish for Him, like a book on a shelf. He will not pursue you. There is no danger that at anytime Heaven and Earth should flee away at His glance. If He were the truth, then we could really say that all the Christian images of kingship were a historical accident of which our religion ought to be purged. It is with a shock that we discover them to be indispensable. You have had a shock like that before, in connection with smaller matters – when the line pulls at your hand, when something breathes beside you in the darkness. So here; the shock comes at the precise moment when the thrill of life is communicated to us along the clue we have been following. It is always shocking to meet life where we thought we were alone. “Look out!” we cry, “it’s alive!” And therefore this is the very point at which so many draw back – I would have done so myself if I could – and proceed no further with Christianity. An “impersonal God” – well and good. A subjective God of beauty, truth and goodness, inside our own heads – better still. A formless life force surging through us, a vast power which we can tap – best of all. But God Himself, alive, pulling at the other end of the cord, perhaps approaching at an infinite speed, the hunter, king, husband – that is quite another matter. There comes a moment when the children who have been playing at burglars hush suddenly: was that a real footstep in the hall? There comes a moment when people who have been dabbling in religion (“Man’s search for God”!) suddenly draw back. Supposing we found Him? We never meant it to come to that! Worse still, supposing He had found us? So it is a sort of Rubicon. One goes across; or not. But if one does, there is no manner of security against miracles. One may be in for anything.

That is what happened to me in Rome, in the Sistine.

For more check out my latest at Catholic365: Michelangelo and Metanoia. A Personal Reflection on the Sistine Chapel.

And, if you want to learn more about the Pope's Chapel, I suggest you take a few moments to watch a fantastic TED talk which has been making the rounds on the Catholic blogosphere:

If you really enjoyed Ms. Lev's talk, you can head to Rome with Catholic apologist Steve Ray and have a tour of the Sistine from Ms. Lev.

You will go with my seething envy, but don't let that stop you! Mr. Ray is a top-notch apologist and, from what I've read, an excellent pilgrimage guide.

If you can, head to Roma. Allow yourself, like the pilgrims of old, to deepen your love for the One, Holy Faith at tombs of Peter and Paul and in the Sistine. You won't regret it.

Recommended Reading (purchase through the links provided to support this blog at no cost to yourself): 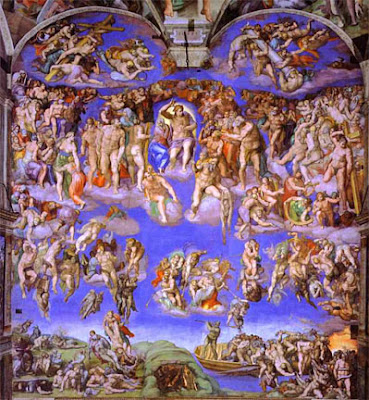