What is one of the most important "values"of modern man, especially here in the United States? Surely, freedom must be near the apex of any list. But what do we mean by "freedom," what is it we "value" so highly? In one of his brilliant insights, our Pope Emeritus took a hard look at the deficient modern notion of freedom.


people have isolated the concept of freedom and have thereby distorted it: freedom is good, but it is only good in association with other good things (Truth and Tolerance, pg 245)

But this isn't the only problem with many current notions of "freedom." Not only have people isolated it from an overall picture of "the good," they also have reduced the notion of freedom to personal rights, which are often in opposition to each other. The best example of this is found within the current debate over abortion, which pits the right of self-determination of the mother against the right to life of her child, thus making mother and child (and by extension the family) in conflict with each other, in competition for "rights" and "freedom" rather than in cooperation for the "good." Benedict points out that the freedom of abortion is not really freedom at all, but rather is "a diabolical parody" as,


The freedom of man is a shared freedom, freedom in coexistence of other freedoms, which are mutually limiting and thus mutually supportive: freedom must be measured according to what I am, what we are - otherwise it abolishes itself.... If the freedom of man can only continue to exist within an ordered coexistence of freedoms, then this means that order - law - is, not the concept contrary to freedom, but its condition... Law is not the obstacle of freedom; rather, it constitutes freedom. The absence of law is the absence of freedom. (Truth and Tolerance, pg 248-249) 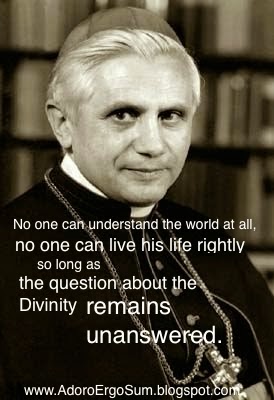 And when he calls some modern notions of freedom a "diabolical parody," he isn't just using a clever literary trope, he is deadly serious, noting that


what clearly stands behind the modern era's radical demand for freedom is the promise: You will be like God....The implicit goal of all modern freedom movements is, in the end, to be like a god, dependent on nothing and nobody, with one's freedom not restricted by anyone else's. (Truth and Tolerance, pg 247-248)

So the freedom of God itself is a "freedom in coexistence" not an "isolated freedom" - a freedom for, from and with, not a freedom against. Thus, God reflects the natural state of the family, which is itself a microcosm of the Divine, and the illusory freedom of Satan mirrors that of those who demand things like abortion, those who would divorce freedom from the good. The prison of this kind of pseudo-freedom is well illustrated by Dante when he sees the Fallen Angel in the pit of hell,


The Emperor of the kingdom dolorous
From his mid-breast forth issued from the ice;
And better with a giant I compare
Than do the giants with those arms of his;...
O, what a marvel it appeared to me,
When I beheld three faces on his head!...
Underneath each came forth two mighty wings,
Such as befitting were so great a bird;
Sails of the sea I never saw so large.
No feathers had they, but as of a bat
Their fashion was; and he was waving them,
So that three winds proceeded forth therefrom.
Thereby Cocytus wholly was congealed.
With six eyes did he week, and down three chins
Trickled the teardrops and the bloody drivel. (Inferno, Canto XXXIV) 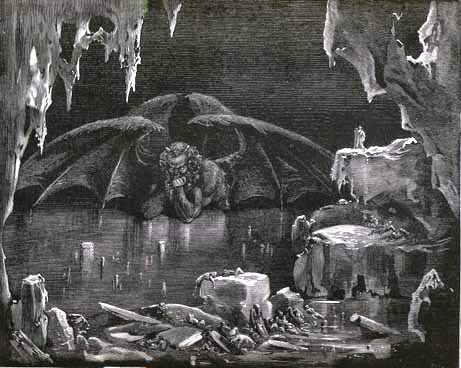 In the end, freedom can only be free when it is a freedom to do what is right. Freedom to sin is no freedom at all, rather it is the most degrading (and common) form of human slavery.
Posted by Nathan Barontini at 9/18/2014 07:46:00 AM