Of Michael Voris, Cardinal Dolan, Ignatius of Antioch, and the Fires of Hell

Michael Voris of ChurchMilitant.tv fame, some of whose talks I've been pleased to share on occasion on my Google+ page, posted an interesting question yesterday, 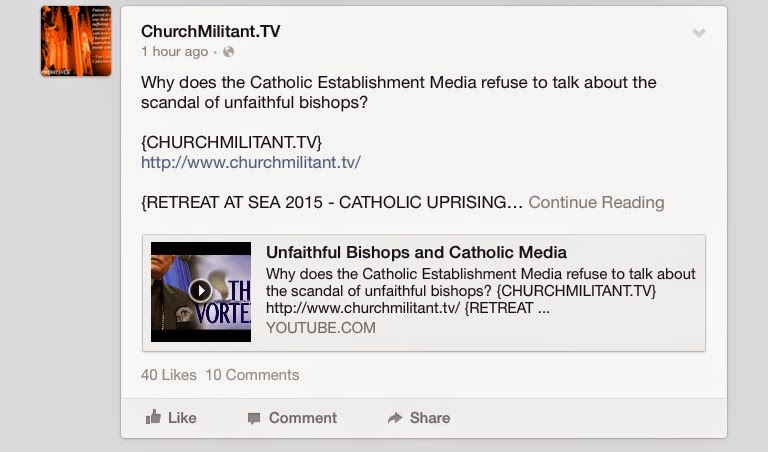 Which is a good enough question to deserve an answer.

My immediate reaction, which I posted on ChurchMilitant's Facebook page was a simple question,


Because tarring and feathering our fathers in the Faith isn't the most Catholic of actions?

But perhaps more could be said. We all can feel indignant when a Catholic bishop publicly does something we personally can't understand or don't agree with. ChurchMilitant has lately been all over Timothy Cardinal Dolan, the Archbishop of New York and a past president of the USCCB, who some consider to be the unofficial head of the Church in the United States. They have even gone as far as to call for his resignation from office. 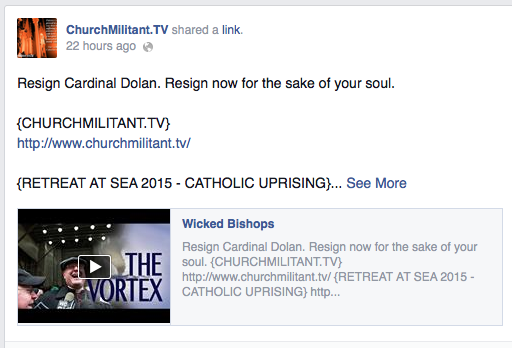 Cardinal Dolan is apparently a "wicked bishop" because he makes prudential decisions which ChurchMilitant.tv doesn't agree with. It isn't a matter of the Cardinal teaching error or of living a debauched lifestyle (things the Church has lived through before), it is a matter of the Cardinal choosing different paths than ChurchMilitant would like, e.g. deciding to continue his involvement in the Saint Patrick's Day parade despite a handful of gay activists marching in the parade under their own banners. Of course, many in the Catholic world are upset over this development. Our parade, a parade honoring our saint (who stood fast in the face of pagan Ireland) is disgraced by activists marching with an anti-Catholic agenda. I certainly would have stood and applauded the Cardinal had he decided to withdraw from the parade, essentially shutting it down as an expression of the Catholic Faith in New York, but he prudentially decided to take a different course of action. Cardinal Dolan decided to not allow the gay pride marchers to run off the Church. A couple small groups marching under their flags declaring their support for both the sin of sodomy and the sin of pride would be drowned out by the much larger Catholic contingent, or so at least Cardinal Dolan seems to think. Whether he is right or wrong, whether his prudential decision is what you, or I, or ChurchMilitant would have done had God decided to raise us to lead the archdiocese of New York is beside the point. It is the Cardinal's decision to make. He isn't marching in a Gay Pride parade. He is leading a paraded in honor of a Catholic Saint in an New York tradition that stretches back to colonial times. If he feels it is too much to beat the retreat simply because a group is marching that no Catholic can approve of, then such is his right as the head of his diocese.

But what of fraternal correction, of admonishing the sinner? Isn't that a spiritual work of mercy? Couldn't the Cardinal's soul be at stake? Doesn't such considerations call for the exact kind of action ChurchMilitant is engaging in? Such are the questions that were fired back at me on Facebook.

In one respect the answer is yes. But, even leaving aside the question of whether Cardinal Dolan's actions rise to such heights, I am left wondering where we are told to admonish the sinner as publicly as humanly possible. I can't seem to remember the place in Scripture or the Fathers that assert such an obligation on the laity. In Matthew 18:15-17 no less an authority than Jesus Himself tells us how to "admonish the sinner"

Which is still ringing in our ears from this Sunday's Gospel reading. You'll note Jesus doesn't tell us to "take it to social media" if our private interventions don't do the trick first. No, he tells us to take it to the Church. To allow the Church to decide and to abide by her decision. If the sinner won't listen to the Church, we are then to treat him as "the heathen and publican." Nowhere in the Lord's instructions do we glimpse a command to publicly ridicule the sinner.

When it comes to the episcopate, St. Ignatius of Antioch has quite a different idea in mind than policing them via social media when he wrote,


it is fitting for you to set yourselves in harmony with the mind of the bishop, as indeed you do. For your noble presbytery, worthy of God, is attunded to the bishop, even as the strings to a lyre. And thus by means of your accord and harmonious love Jesus Christ is sung.


If such is true for priests (the noble presbytery) how much more must it hold for the laity?  If there is perhaps some doubt, a look at his Letter to the Magnesians ought to clear the air,

In the course of our conversation canon 212 was brought up by ChurchMilitant to defend their actions. Doesn't this canon give the laity the right to "call out" our bishops? No, quite the opposite actually, (emphases and comments mine)


Can. 212 §1. Conscious of their own responsibility, the Christian faithful are bound to follow with Christian obedience those things which the sacred pastors, in as much as they represent Christ, declare as teachers of the faith or establish as rulers of the Church. (this would include parades or Fulton Sheen's body or the Al Smith dinner, etc.)

§2. The Christian faithful are free to make known to the pastors of the Church (not to their Facebook and Twitter followers) their needs, especially spiritual ones, and their desires.

§3. According to the knowledge, competence, and prestige which they possess, they have the right and even at times the duty to manifest to the sacred pastors their opinion on matters which pertain to the good of the Church and to make their opinion known to the rest of the Christian faithful, (maybe we have something here...) without prejudice to the integrity of faith and morals, with reverence toward their pastors, (ah... with reverence, I'll leave it to my readers to determine whether those Facebook posts were done with reverence or not) and attentive to common advantage and the dignity of persons.

The obligation of canon 212 is primarily to obey our bishops, to treat them with respect because they represent Christ (the same thing Ignatius was saying 19 centuries ago), and to make our opinion known only to the rest of the Christian faithful "with reverence towards (our) pastors." When read in conduction with canon 220,


Can. 220 No one is permitted to harm illegitimately the good reputation which a person possesses nor to injure the right of any person to protect his or her own privacy.

and the words of our Lord,

the case for "calling out" bishops we don't like crumbles yet further.

ChurchMilitant.tv does some great work. Michael Voris has given great talks (which can be found on youtube) and his One True Faith series, from what I've seen of it, is something all Catholics should take the time to watch. He has been willing to stand up for the truth even when it isn't popular, something which is increasingly necessary and increasingly costly. I respect his efforts on those fronts. However, to answer his organization's question, perhaps those in Catholic media don't set themselves up as the judges of our episcopacy because such isn't their role or mission or yours.

Such a concept can be grating to the mind of an American. We are well used to the media calling out senators and presidents. It is how our politics work. But the Church isn't a democracy. Our bishops, unlike our senators, are not our representatives. They gain their authority not from "we the people" but from God the Father, through Peter. And it is to Him (and His vicar), not to us (or our media), that they must answer. But such is what happens when we start to worry more about how we can save the Church and worry less about how the Church can save us.

Unfortunately, ChurchMilitant seems to have fully committed itself to the "Organize "Recognize and Resist" movements within the Catholic Church and relentlessly attack her from the inside" strategy. Such a strategy, as they themselves so eloquently point out, is not "authentically Catholic" and does more harm than good in the end.

Everyone, including bishops and even the pope, will make decisions that we wouldn't had we only been the one in charge. Then again, maybe God has a reason for setting those men as Princes of the Church and not you or I. Certainly, I don't envy them their job. Not because bloggers, from all sides and with all agendas, constantly attack their every move, but because they will face a harsher judgement than we will for,


unto whomsoever much is given, of him much shall be required: and to whom they have committed much, of him they will demand the more. (Lk 12:48)

Maybe then the best route is the traditional one. If a bishop is acting in a way you can't quite understand, put down the keyboard, stop the youtube video, and pick up a rosary. God will save His Church. He always has. It is guaranteed not to fall. We, on the other hand, have no such guarantee. And, as Michael Voris so deftly describes in his talk on Hell, the eternal consequences of our falling, perhaps occasioned by worrying more about how we can change the Church than about how she can change us, might be such that we'd rather avoid them.
Posted by Nathan Barontini at 9/10/2014 09:24:00 AM