"Good Pope John!" Who doesn't love this newest of saints? He called the Second Vatican Council, ushering in the reforms we Catholics have been heir to for these last five decades. Even the most anti-papal "liberal" Catholics bask in the glow from "Good Pope John". Not only is he widely loved (pace sedevacantists, SSPXers, etc), he is also, thanks to Pope Francis, a canonized saint, and thus, someone we ought to seek to imitate and learn from. With this in mind, let's take a cue from "Good Pope John" and learn to love the things he loved... including the Latin language and its unique role in the life of the Church. 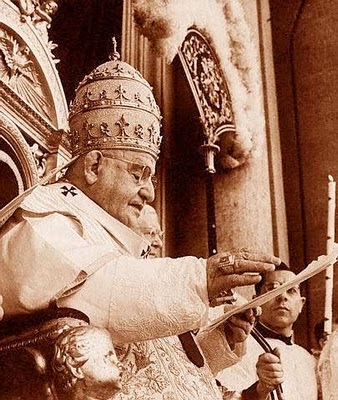 The following quotes (with my emphasis) are from Pope St. John XXIII's Apostolic Constitution Veterum Sapientia


1. Latin is an Universal (aka "catholic") Language.

Since "every Church must assemble round the Roman Church," and since the Supreme Pontiffs have "true episcopal power, ordinary and immediate, over each and every Church and each and every Pastor, as well as over the faithful" of every rite and language, it seems particularly desirable that the instrument of mutual communication be uniform and universal, especially between the Apostolic See and the Churches which use the same Latin rite.
When, therefore, the Roman Pontiffs wish to instruct the Catholic world, or when the Congregations of the Roman Curia handle matters or draw up decrees which concern the whole body of the faithful, they invariably make use of Latin, for this is a maternal voice acceptable to countless nations.

2. Latin is an Immutable Language.

Furthermore, the Church's language must be not only universal but also immutable. Modern languages are liable to change, and no single one of them is superior to the others in authority. Thus if the truths of the Catholic Church were entrusted to an unspecified number of them, the meaning of these truths, varied as they are, would not be manifested to everyone with sufficient clarity and precision. There would, moreover, be no language which could serve as a common and constant norm by which to gauge the exact meaning of other renderings.
But Latin is indeed such a language. It is set and unchanging. it has long since ceased to be affected by those alterations in the meaning of words which are the normal result of daily, popular use. Certain Latin words, it is true, acquired new meanings as Christian teaching developed and needed to be explained and defended, but these new meanings have long since become accepted and firmly established.

3. Latin is not a Vernacular Language.

Finally, the Catholic Church has a dignity far surpassing that of every merely human society, for it was founded by Christ the Lord. It is altogether fitting, therefore, that the language it uses should be noble, majestic, and non-vernacular.
In addition, the Latin language "can be called truly catholic." It has been consecrated through constant use by the Apostolic See, the mother and teacher of all Churches, and must be esteemed "a treasure ... of incomparable worth.". It is a general passport to the proper understanding of the Christian writers of antiquity and the documents of the Church's teaching.  It is also a most effective bond, binding the Church of today with that of the past and of the future in wonderful continuity.

Saint Pope John XXIII, pray for us and for the Church, especially that all Catholics may come to appreciate the God ordained rule Latin has always played in the legal and liturgical life of His Church.
Posted by Nathan Barontini at 6/17/2014 08:52:00 AM