Yesterday on the blog we looked at what Pope Pius XII had to say, in his 1950 encyclical Humani Generis, about the Theory of Evolution. Today let's see what Pius has to say about "watering down" the Faith. Pius saw two major groups of Catholics who were distorting the Faith for different ends. The first group, those with "an imprudent zeal for souls" were the forefathers of a certain type of ecumenism, the kind of ecumenism that seeks to ignore, or altogether abolish, the real differences that exist between Catholics and those Christians outside of the Church. The other group are those who were seeking to water down the Faith to paper over the differences between Catholic doctrine and the fads of modern thought, these are the proponents of the "new theology". These errors are still very much with us today, perhaps even more so than in Pius' day. Let's see what advice Papa Pacelli can give us as we continue to struggle against modernism.


11. ...There are many who, deploring disagreement among men and intellectual confusion, through an imprudent zeal for souls, are urged by a great and ardent desire to do away with the barrier that divides good and honest men; these advocate an "eirenism" according to which, by setting aside the questions which divide men, they aim not only at joining forces to repel the attacks of atheism, but also at reconciling things opposed to one another in the field of dogma. And as in former times some questioned whether the traditional apologetics of the Church did not constitute an obstacle rather than a help to the winning of souls for Christ, so today some are presumptive enough to question seriously whether theology and theological methods... should... be... completely reformed, in order to promote the more efficacious propagation of the kingdom of Christ everywhere throughout the world among men of every culture and religious opinion. (this is a false ecumenism, which wants to water down the Faith in order to unite those Christians separated from the Church.)

12. Now if these only aimed at adapting ecclesiastical teaching and methods to modern conditions and requirements, through the introduction of some new explanations, there would be scarcely any reason for alarm. (It is okay to update the way we explain the Faith to better suit modern men.) But some through enthusiasm for an imprudent "eirenism" seem to consider as an obstacle to the restoration of fraternal union, things founded on the laws and principles given by Christ and likewise on institutions founded by Him, or which are the defense and support of the integrity of the faith, and the removal of which would bring about the union of all, but only to their destruction.

14. In theology some want to reduce to a minimum the meaning of dogmas... They cherish the hope that when dogma is stripped... it will compare advantageously with the dogmatic opinions of those who are separated from the unity of the Church and that in this way they will gradually arrive at a mutual assimilation of Catholic dogma with the tenets of the dissidents. (the idea being that the truth is somewhere between what the Church has always taught and what the "dissidents" teach.)

15. Moreover, they assert that when Catholic doctrine has been reduced to this condition, a way will be found to satisfy modern needs, that will permit of dogma being expressed also by the concepts of modern philosophy, whether of immanentism or idealism or existentialism or any other system...

16. It is evident... that such tentatives not only lead to what they call dogmatic relativism (what Pope Benedict XVI called the "dictatorship of relativism"), but that they actually contain it.... It is also manifest that the Church cannot be bound to every system of philosophy that has existed for a short space of time. Nevertheless, the things that have been composed through common effort by Catholic teachers over the course of the centuries to bring about some understanding of dogma are certainly not based on any such weak foundation (especially St. Thomas and the Scholastics). These things are based on principles and notions deduced from a true knowledge of created things.... (relativism is counteracted by building on the faith of our ancestors, not trying to start over from the beginning)

18. Unfortunately these advocates of novelty easily pass from despising scholastic theology to the neglect of and even contempt for the Teaching Authority of the Church itself, which gives such authoritative approval to scholastic theology. This Teaching Authority is represented by them as a hindrance to progress and an obstacle in the way of science. Some non-Catholics consider it as an unjust restraint preventing some more qualified theologians from reforming their subject....this sacred Office of Teacher in matters of faith and morals must be the proximate and universal criterion of truth for all theologians, since to it has been entrusted by Christ Our Lord the whole deposit of faith...

20.  .... if the Supreme Pontiffs in their official documents purposely pass judgment on a matter up to that time under dispute, it is obvious that that matter... cannot be any longer considered a question open to discussion among theologians. (women priests for example)

21. God has given to His Church a living Teaching Authority to elucidate and explain what is contained in the deposit of faith only obscurely and implicitly. (the Church is mater et magistra today, not just in the documents of her past) This deposit of faith our Divine Redeemer has given for authentic interpretation not to each of the faithful, not even to theologians, but only to the Teaching Authority of the Church...

22. To return, however, to the new opinions... a number of things are proposed or suggested by some even against the divine authorship of Sacred Scripture. For some go so far as to... put forward again the opinion...which asserts that immunity from error extends only to those parts of the Bible that treat of God or of moral and religious matters. They even wrongly speak of a human sense of the Scriptures, beneath which a divine sense, which they say is the only infallible meaning, lies hidden. (this amounts to nothing less the Gnosticism) In interpreting Scripture, they will take no account of the analogy of faith and the Tradition of the Church...

23. Further, according to their fictitious opinions, the literal sense of Holy Scripture and its explanation, carefully worked out under the Church's vigilance by so many great exegetes, should yield now to a new exegesis, which they are pleased to call symbolic or spiritual. By means of this new exegesis of the Old Testament,... they say, all difficulties vanish, difficulties which hinder only those who adhere to the literal meaning of the Scriptures (i.e. only those who actually believe the Bible).

25. It is not surprising that novelties of this kind have already borne their deadly fruit in almost all branches of theology. It is now doubted that human reason... can... prove the existence of a personal God; it is denied that the world had a beginning; it is argued that the creation of the world is necessary...; it is denied that God has eternal and infallible foreknowledge of the free actions of men - all this in contradiction to the decrees of the Vatican Council.

26. Some also question whether angels are personal beings, and whether matter and spirit differ essentially. Others destroy the gratuity of the supernatural order, since God, they say, cannot create intellectual beings without ordering and calling them to the beatific vision. Nor is this all...some pervert the very concept of original sin, along with the concept of sin in general as an offense against God, as well as the idea of satisfaction performed for us by Christ. Some even say that the doctrine of transubstantiation ... should be so modified that the real presence of Christ in the Holy Eucharist be reduced to a kind of symbolism, whereby the consecrated species would be merely efficacious signs of the spiritual presence of Christ and of His intimate union with the faithful members of His Mystical Body.

27. Some say they are not bound by the doctrine... which teaches that the Mystical Body of Christ and the Roman Catholic Church are one and the same thing (Stop and re-read that line. This is still Catholic teaching today. Vatican 2 did not, in fact could not, change that.). Some reduce to a meaningless formula the necessity of belonging to the true Church in order to gain eternal salvation. (extra ecclesiam nulla salus) Others finally belittle the reasonable character of the credibility of Christian faith.


32. ...While scorning our philosophy, they extol other philosophies of all kinds, ancient and modern, oriental and occidental, by which they seem to imply that any kind of philosophy or theory, with a few additions and corrections if need be, can be reconciled with Catholic dogma...

43. ...finally, let them not think... that the dissident and the erring can happily be brought back to the bosom of the Church, if the whole truth found in the Church is not sincerely taught to all without corruption or diminution. (That is the key right there. Not only is abandoning the truth for the sake of bringing people into the Church simply wrong, it also is destined to fail.)

44. ...We impart with all Our heart to each and all of you, Venerable Brethren, and to your clergy and people the Apostolic Benediction. 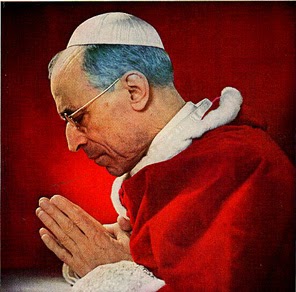