How should we dress for Mass?

In times past our forefathers in the Faith recognized the importance of the Holy Mass in a number of ways, including dressing in nice clothing. 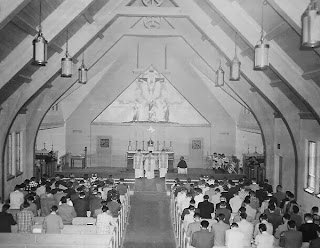 Today, many feel okay coming to Mass in whatever they happen to be wearing on Sunday, shorts, sweats, jeans, even pajama pants. Which is better? Is it just a matter of preference? 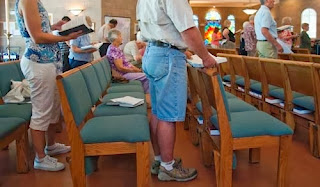 Why should I dress up when I go to Mass?
Mass isn't just another community gathering, we are in the presence of God Almighty. Dressing appropriately shows the respect a creature owes to his Creattor.

I'm always in God's presence because He is omnipresent. I don't dress up all the time, why should I when I go to Mass?
At Mass we are in God's literal, physical presence. After the consecration what was once bread and wine has become Jesus, His body, blood, soul, and divinity. This means that at Mass the presence of God is a difference of kind not just degree from His presence in your everyday life.

Okay, so His presence is different at Mass. Why does that mean I should dress up? He is still always present to me and I still don't always dress up.
Although you are always present to God, you are not always offering formal, communal worship to God. Worshiping God is the most important thing we do each week (cf. Matt 22:36), we ought to dress in a way that shows we understand this.

Worship is about the spirit not the body, so it doesn't matter how I dress.
People are, by nature, psychosomatic unities. We are both body and soul and our worship, as Catholics, reflects this. That is why we kneel, sit, stand, pound our chests, and dress appropriately for worship.

But God, in Christ, is my friend, is my father. I don't dress nicely to spend time with my friends and family, why should I when I spend time with Jesus at Mass?
I bet you do dress up to spend time with family and friends for special occasions - eating at a nice restaurant, birthday parties, baptisms, graduations, anniversaries, and especially weddings. Would you attend your best friend's wedding in flip flops? If you did it would probably scandalize the wedding couple or others attending the ceremony by showing such a lack of respect for such an important occasion. Likewise, we don't want to scandalize others at Mass by dressing in casual clothing.

The Mass isn't like a wedding...
The Mass is the wedding. All other weddings are dim shadows of the Mass. That is why the priest, at every Mass, declares “Blessed are those who are called to the supper of the Lamb”, which reflects the words of the angel in the Heavenly liturgy, in which we participate at Mass, when he says “Blessed are those who are invited to the marriage supper of the Lamb” (Revelation 19:9). Every Mass is a wedding.

Does the Bible directly have anything to say about how we should dress at Mass?
Yes. In fact, in psalm 29 we read, "worship the Lord in Holy attire." Also, Moses commanded the Israelites to "sanctify themselves" and to wash "their garments" (cf. Exodus 19:15) before coming into the Lord's presence at Mount Sinai. Here even nomads traveling in the desert are to put on their "Sunday best" (clean clothes) when meeting God.

That's the Old Testament, certainly Jesus didn't say anything about dressing nice for Mass. He'd accept us however we came to Him. Right?
Wrong. In the Gospel of Matthew, chapter 22, Jesus tells a parable which has many meanings, one of which is being properly prepared, and attired. We read, “But when the king came in to look at the guests, he saw there a man who had no wedding garment. And he said to him, ‘Friend, how did you get in here without a wedding garment?’ And he was speechless. Then the king said to the attendants, ‘Bind him hand and foot and cast him into the outer darkness. In that place there will be weeping and gnashing of teeth.’ For many are called, but few are chosen.” As we saw above, the Mass is a wedding, in fact the wedding which all other weddings foreshadow. You'll also notice that the king (and remember Jesus is the King of Kings, cf.Rev 19:16) calls the informally attired man "friend." Being friends with Jesus, which we are all called to be (cf. John 15:15) doesn't mean dressing causally at the Heavenly banquet.

Jesus was poor and He didn't wear anything special when He worshipped God. Why should I?
The ultimate act of worship by Jesus in His Earthly ministry was the Last Supper and His Sorrowful Passion. In the Gospel of John we see that Christ was wearing, not just any old clothes, but a seamless tunic (cf. 19:23) which was nice enough that the Roman soldiers decided to cast lots for it rather than dividing it and destroying its value. Christ's tunic is reminiscent of the priestly garments worn by the high priest of Israel (cf. Lev. 16:4).

What if I don't own a suit and cannot afford one?
If you are like 99% of the American Catholics who regularly dress in jeans and a t-shirt for Mass, this isn't really the reason. Most of the same people who sit in Church week after week in gym clothes can be found wearing nice suits the next day at work. Of course, some people don't work in jobs that require business dress and these people may not have a lot of extra money to buy extra clothes. Our ancestors, who were on average poorer than we are today, would solve this problem by having a pair or two of "Sunday's best" clothing. They would wear the same same suit or dress each week to Church. Perhaps not the most fashionable idea, but certainly appropriate.

What if I can't even afford one nice Sunday outfit?
Of course, the idea isn't to go into debt to purchase a $1,000.00 suit for Mass. All we need to do is wear our best. A homeless person might only have one set of clothes all week. Fine, wear them to Mass - that is the best he has. A soldier on a battlefield might only have his fatigues. Again, wear them. It is about wearing the best you can, not dressing in a particular outfit, but if you dress nicer to impress your boss at work than you do for the Creator of the universe at Mass, your priorities might be screwed up. 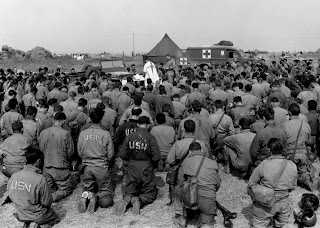